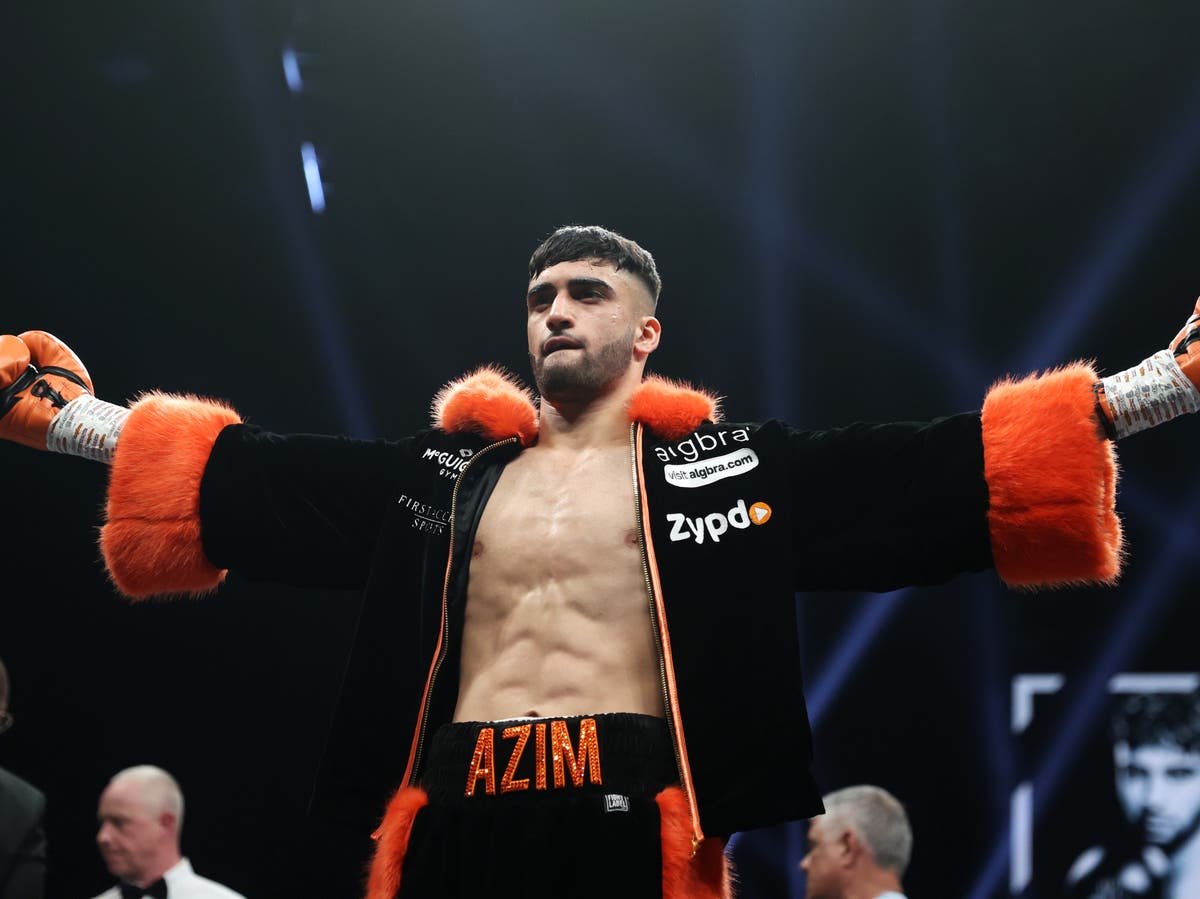 It is a chilling statement uttered with the most flattering of intentions: “We’re dealing with a freak.”

Those are the words of boxing promoter Ben Shalom, speaking over Zoom, pacing back and forth in a room that appears to have just a few small windows – just below the ceiling, along the back wall. You’d think he was a military commander fruitlessly planning how to take down Godzilla, but the Boxxer chief is in fact on the side of the monster in question here.

And that monster is Adam Azim.

It might seem an odd way to describe the 5ft 11in, 20-year-old super-lightweight, but put a pair of boxing gloves on the Briton and the results really are terrifying.

“I remember when I was four years old,” the monster tells The Independent while lurking in a hallway inside Shane McGuigan’s gym. “My dad made me learn the basics at the back of the garden in Slough, he got me a speed ball in the garage. He used to put weighted hand wraps on me and make me do shadow boxing for like 20 minutes straight. Even when I was punching the speed ball, he used to put ankle weights on my legs and hands. I was very fast when I was young.”

He is even faster now, his speed perhaps his greatest asset at this point in a fledgling professional career that is expected to grow into a captivating one.

“When we saw him for the first time, we knew he was special,” says Shalom, 29. “Everyone in boxing was talking about Adam Azim for a long time. We knew that a lot of promoters were going to be looking at him, and that we needed to secure him for a long time, because we believe that he can be literally one of the biggest stars that the country has seen – a household name.

“We want him on the screens all the time. He almost reminds me of Amir Khan in 2005. Those were some of my earliest memories of boxing, Amir was boxing every couple of months on ITV and drawing huge audiences. We want to emulate that and take that to a new level.”

Azim is still just 6-0, but as he prepares to face Rylan Charlton at London’s Alexandra Palace on Sunday night, he is seeking a fourth straight first-round knockout.

“He looks at a lot of the world champions and believes that he would beat them in his next fight,” Shalom says, unquestionably serious, his eyes shark-like. “And Shane believes that. This is not a joke.

“It’s high-risk, low-reward [for opponents]. I cannot tell you how feared this guy is; there’s world champions right now who would no way take a fight with him, even on a full camp’s notice, and I know that for a fact. We’re dealing with a freak, we’re dealing with a talent that you don’t see very often.”

There is almost something humorous about the contrast between Shalom’s – clearly credible – observations and the unassuming way in which Azim speaks. He is, after all, just 20.

But his life is not that of the average 20-year-old. Azim, like his highly-touted, 22-year-old brother Hassan, has been reared to be a champion.

We discuss his love of action films – “The Raid, The Raid 2, all the Mission: Impossible films; the last film I saw was Black Adam, I’m into DC and Marvel” – but that is the only extracurricular pastime that Azim allows himself. And it has been that way since he was young. Well, even younger.

“I didn’t go out much,” he says. “I was always dedicated to boxing. I’d go swimming, cinema, or just chill out at a mate’s house. I didn’t really get to go out and explore, which… You’ve got to make sacrifices in your life.

“Even now, I could go out and do a lot of stuff, but I’m just dedicated to my craft, because you can’t switch off in boxing. Footballers can do that because they have a team. All I really do on a weekend off is go for a walk, go round my mates’, or go to the cinema. That’s the same routine I’d done when I was younger. I ain’t gonna change it now, because you don’t wanna go the wrong way. I’ve got a goal to achieve, that’s all I wanna do.”

Was there ever a threat of Azim going the ‘wrong way’?

“I only went to secondary school for three months, because I was messing about, and my dad actually took me out and made me do home schooling so I could focus on boxing,” Azim says. “I believe if I’d gone to that school… I don’t know what I’d be doing now. My dad did the right thing, I thank my dad a lot for that.”

Azim does seem genuinely grateful to be on this path, and to his dad for setting him on it.

“He got me where I am today. He noticed I had that fighting spirit. In my family, our cousins and uncles are all fighters. I was meant to be a fighter – I can just feel it, you know?”

“All he wants to do is fight; he would do it for free, he absolutely loves it. I’ve never met someone as focused as he is. It’s sometimes hard for Shane to calm him down.

“It does take a lot for someone to become a star in boxing, there are so many elements that you can get wrong, [but] he’s made some really good decisions early on. His dad knows the game inside-out, and they’ve been preparing for this moment since he was about six years old. It literally is something that they knew was gonna come; they planned meticulously for the last 15 years.

“You see tennis stars who’ve been taken around the world since they were young, they were almost bred to be No 1 in their sport. I really believe that’s how Adam has grown up.

“He’s also a person who wants to stand for the right things and be the face of British boxing. We think he’s gonna be the one who really becomes synonymous with British boxing over the next five to 10 years.”

The immediate goal is beating Charlton; the next is for Azim to become the youngest active world champion in the sport.

You’d be a brave man to bet against a monster like this.