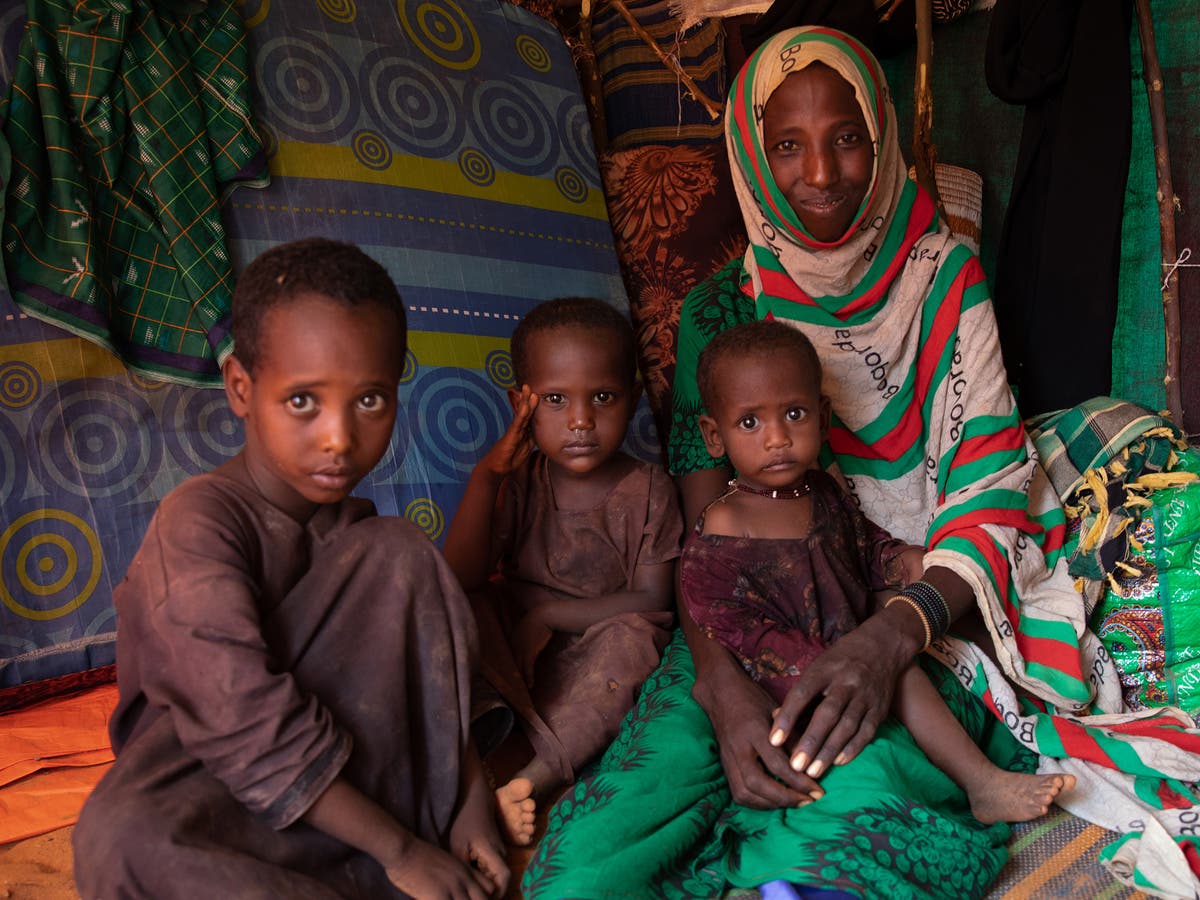 They buried five-year-old Mohamed in a shallow grave, in a place unknown, where his family had briefly stopped to rest. “We had no food, no water, and he was malnourished and exhausted and he didn’t survive,” says his mother, Mido.

With four other children to care for and many days of travel ahead, the 25-year-old said a short goodbye and carried on walking. Eventually, the young family made it to the Kabasa camp in Dolow, a town on the banks of the Dawa river, along the border of Somalia and Ethiopia.

I meet Mido and her 12-month-old daughter, Fatun, at a health centre funded by the United Nations’ World Food Programme (WFP), about 10 days after their arrival there. Her feet are finally starting to heal from the month-long journey, but her grief is raw. Like her children, she is thin and hungry.

“We left our home because we had nothing left – we just had drought and hunger,” says Mido. “We were pastoralists and had cattle and camels, but we lost all our livestock and when our final animals died that was it. There was no water, no food for my children, no way to get money.”

In the days that follow, I talk to other women. Ambiyo, Ayan and Dahera all tell versions of the same story of hunger and years of relentless drought – dwindling resources, dying and dead livestock, no rain, no food.

They each recount long journeys, walking day and night, carrying and cajoling small children to keep them moving in search of refuge. Sparse sips of dirty water, worried that waterborne diseases will take their children if the thirst and hunger do not. Or worse: that if they stop walking, armed men will take them all. All of the women tell me that they feel safer here in Dolow but they need more help – because can’t I see that the rains have not arrived?

Drought drives the threat of famine

The drought is most visible from the air. Rivers and tributaries that should be flowing stretch out across the landscape, cracked and grey. I’m visiting in what should be a rainy season, but no rain falls. Even if it did, it would be too little, too late.

The patterns of rain in this part of the world mean that traditionally there are two growing seasons each year; and every few years or so communities brace for, and can cope with, drought. In times of scarcity, families would stockpile food or sell off prized livestock to provide a financial buffer to buy food and water. Things would be lean, but they’d be able to cope until the rains came again.

Increasingly, however, the rains aren’t falling. When they do, they’re inconsistent and short. Scorching temperatures are pummelling the region on a more frequent basis. Since 2008 there has been a drought every single year; 2011’s led to widespread famine across the Horn of Africa. Now, the risk of famine looms over Somalia again.

“In the past few weeks, we have seen malnutrition rates triple,” says Jama Mohamud Ahmed, a WFP programme policy officer in Dolow. “These families have now lived with drought for years, and women and children are walking 200-300 kilometres to come here because they know they can get support.

“When they get here, they need immediate life-saving assistance, but we don’t have the resources we need to assist all those at risk. And both the drought and the ongoing insecurity will mean that more and more people will continue to arrive in need of our help.”

In recent months, WFP has been drastically scaling up the life-saving food and nutrition assistance that it provides in Somalia, racing against time to avert another famine. With the support of donors and partners, we’re now reaching more people than ever before in the country with desperately needed relief: more than 3.5 million people in June alone.

But as the devastating drought continues, the numbers of hungry people keep growing. More than 7 million people face critical food insecurity. And while we are working to scale up even further, aiming to get food and nutrition support to almost 5 million Somalis in the coming weeks, there is no immediate end in sight to the crisis. Early forecasts for the next rainy season are dismal.

WFP needs sustained resources, close to $300m over the next six months, to avoid the worst outcomes of the drought – and to continue our investments in longer-term livelihoods, food systems and resilience projects that will enable Somalis to better cope with climate crises.

The day we arrive in Dolow there is a red alert, which means that UN workers are at an increased risk of attack or kidnapping. At WFP we’re familiar with working in fragile contexts but the alert is a reminder of how difficult the situation is here – conflict is compounding the climate crisis in Somalia and impacting our ability to reach those most in need.

Dolow has been shaped by successive influxes of people fleeing conflict, drought or, more often, a combination of both. Families are drawn by the relative safety and access to assistance that humanitarian organisations cannot provide in other parts of the country.

“We came here as we heard we would get some help,” explains 24-year-old Ayan. “We left our home because there was no water and our livestock had died.” She adds that Al-Shabaab, one of a number of armed non-state groups driving conflict in Somalia, made the family’s problems worse: “They were attacking us day by day and we lived in fear of them.”

While families like Ayan’s are fleeing direct insecurity within Somalia, they are also indirectly impacted by a conflict that is raging thousands of kilometres away. The war in Ukraine is causing a ripple effect that is compounding a global food crisis, further driving up food prices that were already soaring because of drought and pushing more families to the precipice of starvation. WFP estimates that more than 880,000 people are struggling for survival as they endure catastrophic hunger in Somalia, South Sudan, Afghanistan and Yemen.

These terrible conditions impact the most vulnerable first. Ayan’s 18-month-old daughter, Mushtaq, was so severely malnourished when they arrived in Dolow that she weighed just 6.7kg. Four months pregnant, Ayan was barely clinging to life. Today WFP is supporting them both with nutritional therapy and fortified cereals – and prioritising others, like them, who are most at risk. Yet even then, the help we can offer sometimes comes too late.

I meet 24-year-old Ambiyo in the health centre where her youngest child, Abdi, is receiving therapeutic treatment for malnutrition. “The drought killed everything. Al-Shabaab used to target our village as well, so it wasn’t safe where we lived. It took us about a month to get to Dolow. We had to make the kids walk and it is a hard journey – we would rest only when we had to. Fudosa [aged three] was seriously ill – very malnourished and sick from the dirty water … she died when we got here.”

They buried Fudosa in a small grave, on the outskirts of the camp – in this place where they finally found safety.

Kirsty McFadden is head of creative at the World Food Programme.