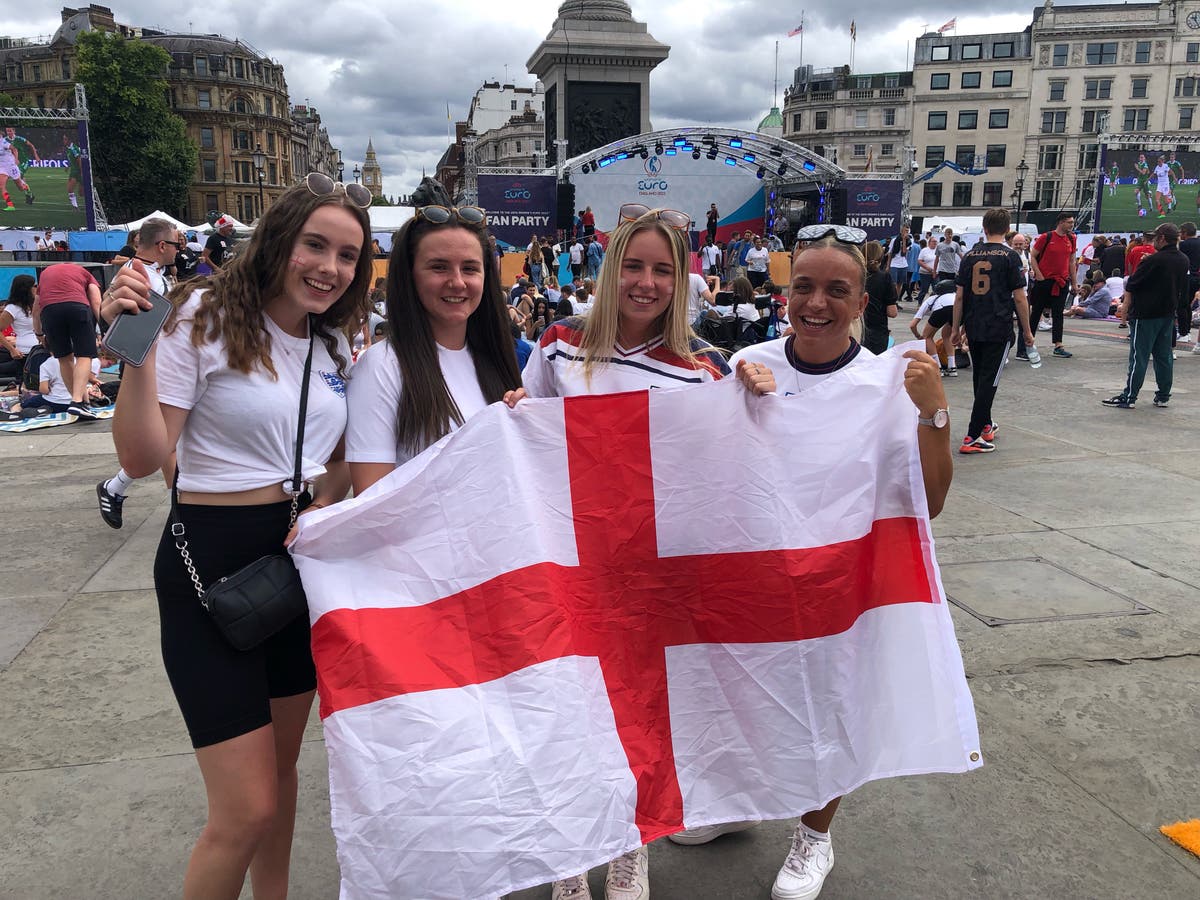 Little more than half a century ago, women were still banned from playing at football league grounds in England.

Yet, today the Lionesses made history by clinching the Euro 2022 title on the nation’s greatest footballing stage, Wembley, in front of more than 87,000 people – with thousands more roaring them on in Trafalgar Square.

A crowd of 7,000 massed at the London landmark on Sunday to watch the final between England and Germany on big screens. Trafalgar Square erupted in celebration at the end of a nail-biting extra time, with some fans waving St George’s flags and others embracing.

Four friends from Devon – who all play for the same football team, Juventus Academy Devon – got on the road at 6am to make the trip to London to cheer on England from Trafalgar Square.

After Chloe Kelly’s extra-time strike gave England a historic 2-1 victory, the friends were jubilant. Hannah Healey, 18, from Torquay, who works at a waterpark, told The Independent: “Women’s football’s going up in the world and men will notice it more, it’ll just be more equal.”

Friend Rachel Fleming explained: “Younger girls now are gonna think, I can play football.” The 24-year-old, who works at a caravan park, added: “I think it’s just gonna give girls confidence as well to go and do it. If they’ve been thinking about it… and get told, ‘Only boys can play’, this is gonna change it.”

Elsewhere at Trafalgar Square, Grace Power, sporting a St George’s flag painted on her face with “2022” written on it in eye-liner, was joined by two friends to watch the final. The 29-year-old, from London, said: “Even if they didn’t win, we’re so proud of what they’ve achieved here today… what they’ve done for women’s sport… it’s gonna be amazing, I feel.”

Before kick-off, there was optimism among the crowd about the impact of England’s success in the tournament. Becca Stewart, 24, was going to make the trip to Trafalgar Square alone, until her friend, Emma Hoskins, 23, not typically a football fan, stepped in to join her.

“It’s the first time I’ve seen that the whole country has paid attention and not just those interested in women’s football,” Ms Stewart, wearing an England shirt and with a St George’s flag painted onto her cheek, told The Independent before kick-off. “Seeing men, people that aren’t interested in football, actually paying attention to women’s football has been so nice and also shows that we’re making a step in the right direction for equality in every aspect, not just football.”

Ms Stewart, originally from Guernsey but who now lives in London and works as a terrorism threat analyst, added: “I think the fact that we did well in the men’s Euros, we got close, and post-Covid everyone wants something to celebrate and get together and enjoy together and this is just the follow on from that. And the fact that, once again, we’ve got to the final is sort of a boost for England in general.”

Hoskins, 23, a security assistant, said: “When it comes to big tournaments, I’m just here for the atmosphere. I’m being a supportive friend. She would have come on her own but I didn’t want her spending the weekend on her own.”

The women’s game has come a long way since the FA council said in 1921 that football was “quite unsuitable for females and ought not be encouraged”. Extraordinarily, the ban imposed then on women playing at the grounds of affiliated clubs survived until 1971, when it was finally lifted.

Ms Stewart added: “I’ve been to the last two FA cup finals for women and the fact is that each year we break the record for attendance.

“[The attendance is]… going up and going up. It seems that people are finally taking women’s football as seriously as they do men’s football and that shows how much of a jump we’ve made from when it was banned to now.”

What TV channel is Brazil vs Serbia on? Kick-off time and where to watch World Cup fixture

Brazil vs Serbia live stream: Where to watch World Cup fixture online and on TV today

Brazil vs Serbia prediction: How will World Cup fixture play out today?