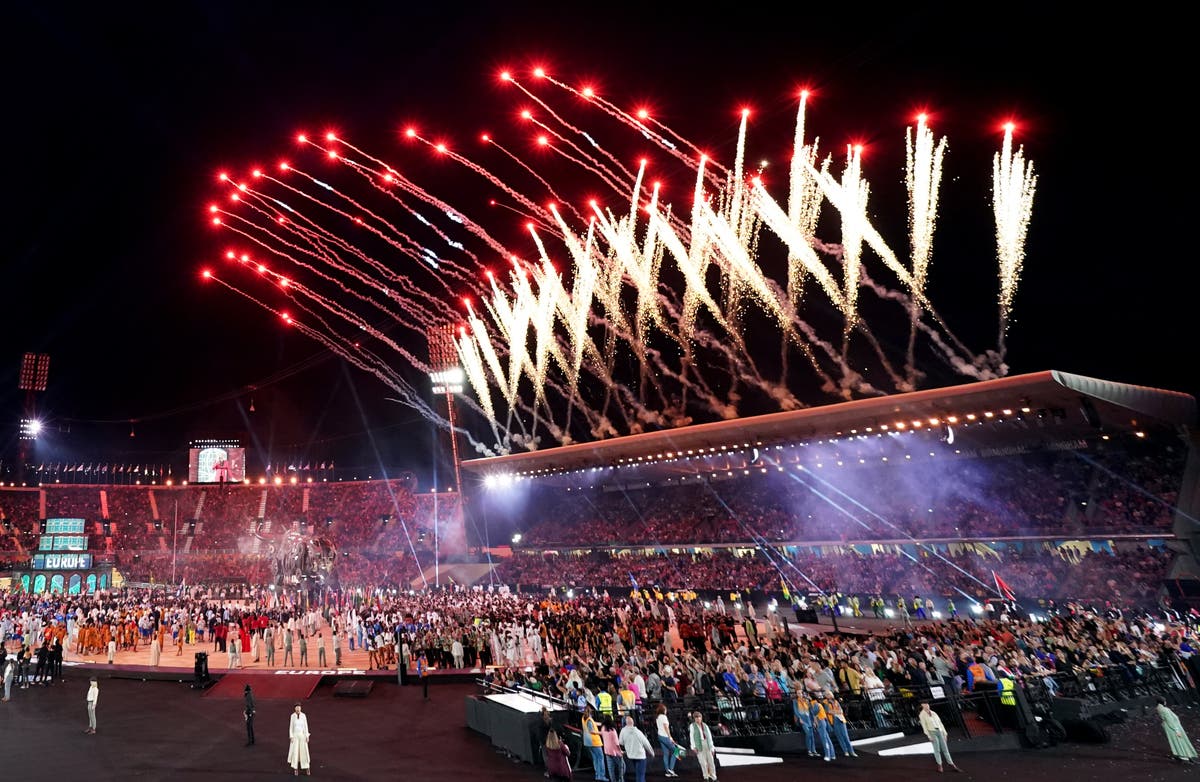 Birmingham’s Commonwealth Games kicked off in a carnival of colour at the Alexander Stadium on Thursday night.

Local musical heroes Duran Duran and Black Sabbath guitarist Tony Iommi guest-starred on a night which celebrated Birmingham’s industrial heritage and its multicultural tradition, as competitors from the Commonwealth’s 72 nations and territories were cheered into the arena by a 30,000 crowd.

The Prince of Wales and the Duchess of Cornwall arrived in style, driving into the venue in an Aston Martin as part of a convoy of 72 cars which formed a Union Jack when viewed from above.

Charles later officially declared the 22nd edition of the Games open, with a spectacular fireworks display bringing the ceremony to an end and heralding the start of the world’s first major multi-sport event to take place free of Covid-19 restrictions since the pandemic took hold.

Charles delivered The Queen’s message to the Commonwealth Games. In it, she said the Games “remind us of our connection with one another, wherever we may be in the world, as part of the Commonwealth family of nations”.

The Queen’s message described Birmingham as “a pioneering city which has drawn in and embraced so many throughout its history”.

“It is a city symbolic of the rich diversity and unity of the Commonwealth, and one which now welcomes you all in friendship,” the message said.

A stunning spectacle also included a Red Arrows fly-past and an appearance from a 10-metre high ‘Raging Bull’, in a section of the ceremony which focused on the plight of female chain-makers in the early 20th century.

More than 5,000 athletes will compete in 280 events across 19 sports in the 10 days coming up, with a para sport programme integrated into the Games. It will also be the first major multi-sport games to award more medals to women than men – 136 and 134.

Other ‘firsts’ for Birmingham’s Games include a Commonwealth debut for women’s T20 cricket, and for 3×3 basketball as the Games continues its bid to evolve and remain relevant.

Event organisers want this to be an inclusive Games, but Olympic diving champion Tom Daley’s presence as a baton-bearer highlighted the continued challenges facing members of the LGBTQ+ community across the Commonwealth.

Thirty-five Commonwealth countries criminalise same-sex relationships, according to the International Lesbian, Gay, Bisexual, Trans and Intersex Association (ILGA), and Daley’s determination to take a stand is especially pertinent in a year when football’s World Cup will be played in Qatar, where homosexuality is prohibited by law.

The ceremony also featured an appearance from activist Malala Yousafzai. The 25-year-old, who now lives in Birmingham, campaigns and raises funds for girls’ education programmes in her native Pakistan.

Her determination to stand up for her beliefs almost cost her life, when she was shot in the head in an assassination attempt in 2012.

“Tonight teams from 72 countries and territories join the people of Birmingham to celebrate friendship across borders,” Malala said.

“They represent millions of girls and boys and our shared goal, where every child can go to school, where women can fully participate in society and where families can live in peace and dignity.

“Remember, every child deserves her chance to fulfil her potential and pursue her wildest dreams.”

All around the city is the slogan ‘Sport is Just the Beginning’.

Games organisers want sport to be the vehicle to start the conversations and prompt the actions necessary to tackle inequality and discrimination across the Commonwealth.