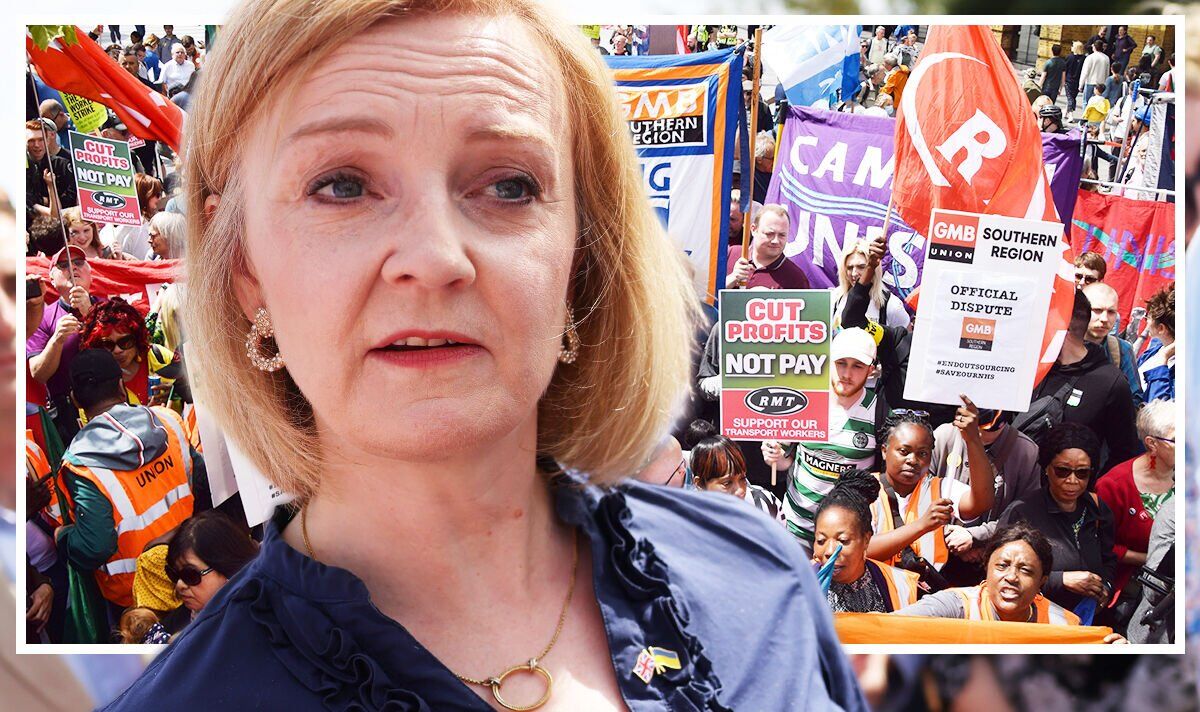 Around 40,000 workers at Network Rail and more than a dozen train companies will go ahead on Wednesday (July 27) as they continue to seek a massive inflation-fuelling pay rise.

“I will do everything in my power to make sure that militant action from trade unions can no longer cripple the vital services that hard-working people rely on.”

She has put the blame for the hardline action at the feet of trade union barons like the RMT’s Mick Lynch and has vowed to end their ability to hold the UK to ransom.

Among the reforms Ms Truss will introduce will be a minimum service level on critical national infrastructure – introducing primary legislation in the first 30 days of Government.

She will also raise ballot thresholds to make it harder for strike action to take place across all sectors.

The train drivers’ strike is just the first of a series planned by hard-left trade unions with teachers, nurses and even doctors threatening walkouts over pay.

A campaign spokeswoman for the Truss leadership campaign said: “Liz is determined to stand up for people who work hard and do the right thing. For too long, trade unionists have been able to hold the country to ransom with threat of industrial action.

“The steps she has announced today will finally allow the Government to take back control from trade union barons and deliver the economic growth we need to put money back in hardworking families’ pockets.”

The proposals are meant to be a direct appeal to Tory members on the right of the party.

One of the frustrations with Boris Johnson’s Government was that he did not introduce conservative policies such as tackling militant unions as well as failing to take on woke issues properly.

Senior Brexiteers are already describing Ms Truss as the “unite the right” candidate despite opponents playing a video of her as a teenage member of the Lib Dems almost three decades ago.

The announcement today will include a series of measures that would prevent trade unions from holding the UK economy to ransom and causing severe disruption on strategic rail routes and other vital national services.

Clamping down on unions’ powers to disrupt hard-working people trying to travel to work, Ms Truss’s Government will introduce legislation in the first 30 days of Parliament to guarantee a minimum level of service on vital national infrastructure.

Tailored minimum thresholds, including staffing levels, will be determined with each industry.

Have your say: Do you want Boris as PM and ban Truss/Sunak rule? [REACT]

Ms Truss will introduce a number of other measures to hinder unions’ ability to cripple the economy.

She will ensure strike action has significant support from union members by raising the minimum threshold for voting in favour of strike action from 40 to 50 percent, and expanding this rule across all sectors.

Here would be an increase in the minimum notice period for strike action from two weeks to four weeks.

Her Government would implement a cooling-off period so that unions can no longer strike as many times as they like in the six-month period after a ballot.

She would also put an end to members receiving tax-free payments from trade unions on the days they are striking.

Reacting to the proposals RMT general secretary Mick Lynch said: “The proposals by Liz Truss amount to the biggest attack on trade union and civil rights since labour unions were legalised in 1871.
“Truss is proposing to make effective trade unionism illegal in Britain and to rob working people of a key democratic right.
“If these proposals become law, there will be the biggest resistance mounted by the entire trade union movement, rivalling the General Strike of 1926, the Suffragettes and Chartism.”
TUC general secretary Frances O’Grady said of the proposals: “The right to strike is an important British freedom.
“Threatening the right to strike means working people lose the power to bargain for better pay and conditions.
“Instead of taking potshots at working people and their unions, the candidates should come up with plans to get wages rising again. That’s how to deal with the cost-of-living emergency.”

Meanwhile, Labour made it clear it would side with the union barons.

Angela Rayner, Labour deputy leader and shadow secretary of state for the future of work, said: “As we saw with the Government’s plans to break strikes with agency workers, these plans are unworkable, will only erode working people’s rights further and inflame industrial relations at a critical time.”

In response to the latest strike threats, Mr Sunak said: “These irresponsible strikes will cause hardship for millions of ordinary workers across the country.

“Keir Starmer and the Labour Party should stand up to their Union paymasters instead of joining them on the picket line.

“We need to urgently deliver our 2019 Manifesto commitment to require minimum service levels during transport strikes.

“As Prime Minister, I will stop the Unions holding working people to ransom. I will do whatever it takes to make sure that Unions cannot dictate how the British people go about their daily life.”