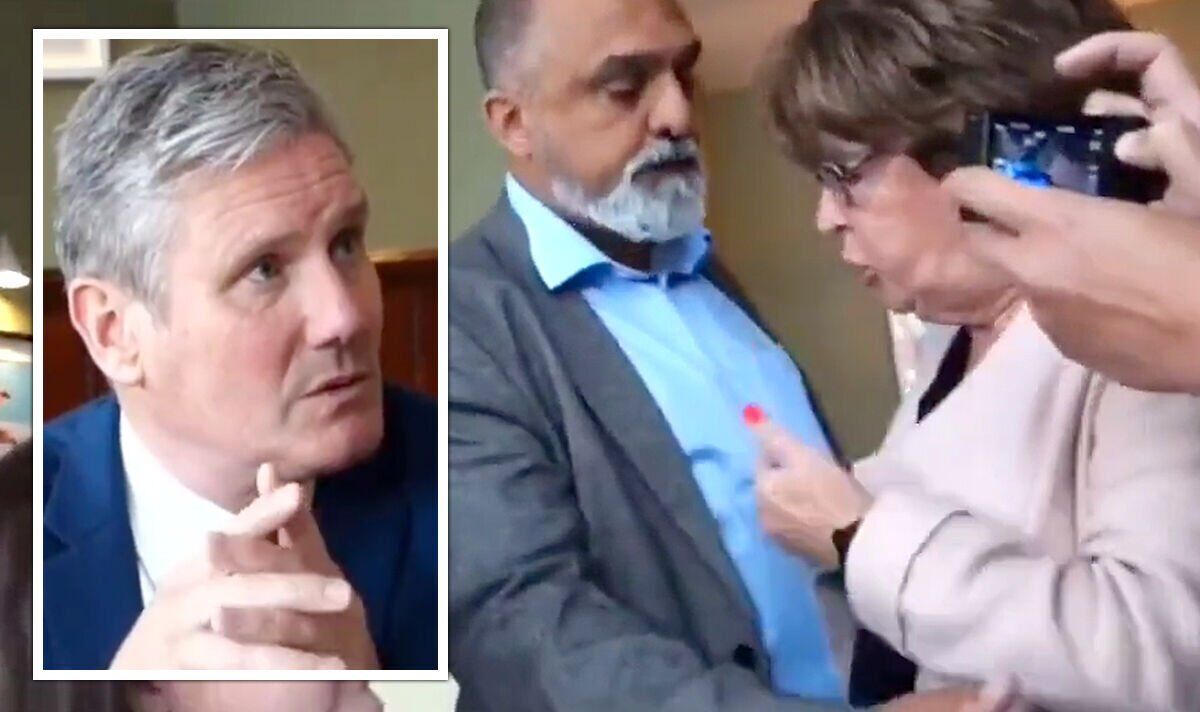 Sir Keir Starmer was left squirming after a demonstration by left-wing Labour activists saw the Leader of the Opposition brutally called out over his leadership of the party. The Labour leader sat in silence as he was confronted by a furious Liverpudlian woman after giving a speech in the city on Monday.

The woman told the Labour leader: “Can I just say that? I don’t know how you’ve got the guts to come to this city after you have been interviewed and doing columns for the Sun newspaper, after the way we as a city, the Hillsborough victims were abused by that paper, and you’ve come here.

“Secondly, you lied to us about uniting the party. I’m still a Labour Party member, and you’ve expelled and witch-hunted in the most vicious way I’ve ever seen in my lifetime, and I’ve been a member of the Labour Party for a long, long time.

“You have absolutely said you had ten pledges, you are going to carry on the Corbyn legacy and ever since you’ve done nothing, but distance yourself from the ideas which tens of thousands of people join the Labour Party to support.

“All You’ve done this feed into the Tory ideology of not supporting strikes and of carrying on with the privatisation of our health care.”

It comes after the Labour leader indicated a retreat from a pledge he made when he was running for the party’s leadership in 2019 to support “common ownership of rail, mail, energy and water”.

Sir Keir was challenged about his view on nationalising utilities on Monday after shadow chancellor Rachel Reeves earlier said the policy was not compatible with the party’s new “fiscal rules” to control public spending.

He told reporters in Liverpool: “I take a pragmatic approach rather than an ideological one, I agree with what Rachel Reeves said this morning.

“Having come through the pandemic, it’s very important we have very, very clear priorities and that’s why we’ve set out fiscal rules already as an opposition.”

He added: “My mission is growth and underpinning that mission is a partnership arrangement with business, where the mission is set by an incoming Labour government and we empower business to work with us in delivering on that mission.”

Sir Keir then suggested that taking railways back into public ownership was not his preferred option, despite shadow transport secretary Louise Haigh telling the rail union Aslef in March that Labour was “totally committed” to the policy.

The Labour leader said: “I think what some of our mayors and metro mayors are doing with public transport is the right way forward – absolutely focused on keeping the price down and making sure there’s control over where things go, particularly buses…

“I absolutely understand the frustrations of everybody trying to use the rail service”.

Have your say: Do you think Boris should come back as PM? [REACT]
Boris WILL make a comeback and here’s how says DAVID MADDOX [INSIGHT]
Smug Starmer’s plot to seize on Tory leadership chaos FAILING [REVEAL]

However, Sir Keir later indicated Labour would stick to plans to nationalise the railways, telling the Mirror: “Rail is probably different from the others because so much of our rail is already in public ownership.

“That is what I mean about not being ideological about it.

Ms Haigh later restated her view of her party’s position, tweeting: “UKLabour is committed to public ownership of rail and putting the public back in control of our bus network to drive down prices, improve services and meet net zero”.