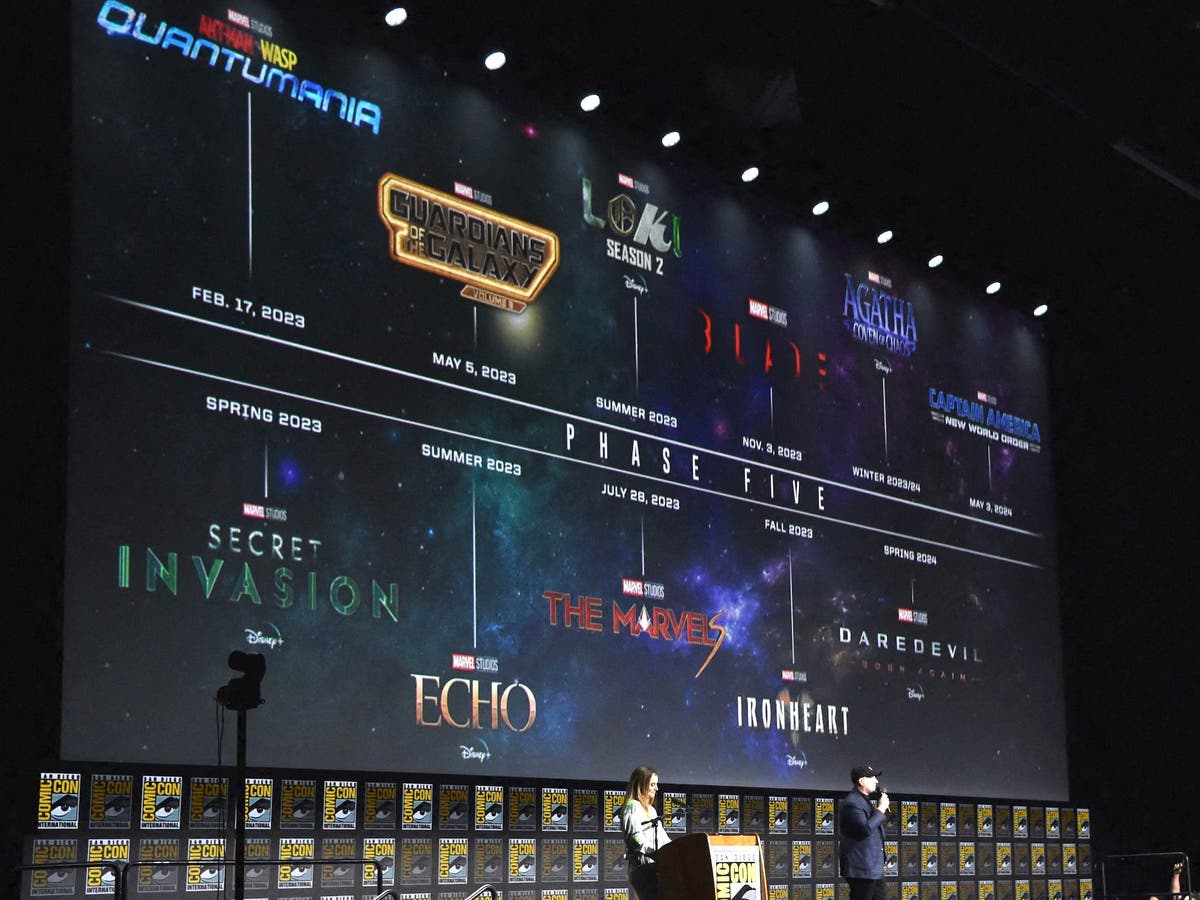 Marvel has officially unveiled its slate for Phase Five and Six, revealing every film and TV show it plans to release up until 2025.

The hugely anticipated panel gathered at Comic-Con on Saturday evening (23 July), with the annual entertainment event taking place in San Diego, California from 21 to 24 July.

In addition to the many releases that were officially announced, studio boss Kevin Feige gave fans more than a few hints at other speculative decisions that could define the future of the Marvel Cinematic Universe.

Below are the 10 biggest things we learned at Marvel’s Comic-Con panel:

Phase Six of the MCU will conclude with a double whammy of Avengers movies. First off is Avengers: The Kang Dynasty, which is scheduled for release in May 2025. That will be followed by Avengers: Secret Wars on 7 November 2025.

The much-anticipated teaser trailer for Black Panther: Wakanda Forever finally dropped. Director Ryan Coogler has wowed fans with a visually “stunning” clip teasing Wakanda’s aquatic environments. The clip also featured what appears to be a funeral scene, likely to be for Chadwick Boseman’s character T’Challa following the star’s death in 2020. While the superhero is spotted for a brief moment at the end of the trailer, the question remains: who has taken up the Black Panther mantle?

Phase Five launches with the release of Ant-Man and the Wasp: Quantumania on 17 February next year. The sequel will introduce Jonathan Majors as Kang the Conqueror and also Bill Murray. Appearing on stage to debut the first official look, Paul Rudd teased where his hero Scott Lang is at after the events of 2019’s Avengers: Endgame. Fans also got a first look at MODOK, the cybernetic villain from the Marvel Comics who is making his live-action MCU debut. The identity of the actor behind MODOK is still up in the air, however, given that the character does not speak in the trailer.

Kevin Feige backs Ryan Gosling as the next Ghost Rider

The character famously portrayed by Nicolas Cage has been the subject of much debate, with actors – most notably Norman Reedus – throwing their hat in the ring to play him. Ryan Gosling recently also stated his ambitions to play the Marvel anti-hero. When the two options were put to Kevin Feige by a reporter post-panel, the Marvel president had a clear favourite. “Gosling is unbelievable,” he said.

Phase five will continue with the May release of Guardians of the Galaxy Vol 3. An emotional James Gunn appeared at Comic-Con to debut the official first trailer for the film, which he confirmed will be his last Guardians outing. “This is the end of that story. I’m sorry. Some stories have an end. It doesn’t mean everybody dies,” he said. The new trailer teases a sad origin story for Rocket, and also gives fans a glimpse of MCU newcomer Will Poulter who is playing Adam Warlok.

Daredevil characters will appear in Echo

While there was nothing revealed about Echo (the Hawkeye spin-off starring Maya Lopez, played by Alaqua Cox) other than the release date in summer 2023, it was disclosed that characters from Daredevil: Born Again will appear in the series prior to the release of Daredevil the following year. Charlie Cox’s Matt Murdock and his nemesis Kingpin (Vincent D’Onofrio) are both set to appear in Echo, with Cox’s superhero also set to star in She-Hulk.

Daredevil is being given an unprecedented order for its first season

Marvel is seriously backing Charlie Cox’s Matt Murdock. The series – aptly title Daredevil: Born Again – has received an unprecedented 18-episode run for its first season on Disney Plus. The series will be released as part of Phase Five in Spring 2024.

Phases four through six are nicknamed the Multiverse Saga

In a similar vein to how Phases One to Three were packaged as the Infinity Saga, it was announced that Phases Four through Six will be known as the Multiverse Saga.

It’s not news that Kathryn Hahn’s fan-favourite character Agatha Harkness from WandaVision will be the focal point of her own spin-off series, but fans have finally got a date to look forward to. Well, kind of. The series has a speculative release of Winter 2023/2024. The writers have also had a change of heart, changing the original title Agatha: House of Harkness to Agatha: Coven of Chaos. Fans will be happy to hear that Jac Schaeffer – head writer of the critically acclaimed WandaVision – will write and executive produce the show.

A conspicuous absence of Loki

The much-adored series starring Tom Hiddleston that introduced the multiverse concept to the MCU went without mention at this year’s Comic-Con. Filming has begun on series two, which will debut on Disney Plus next summer but any revelations or details were kept under wraps. So while we haven’t learnt anything – we’re assuming no news is good news?