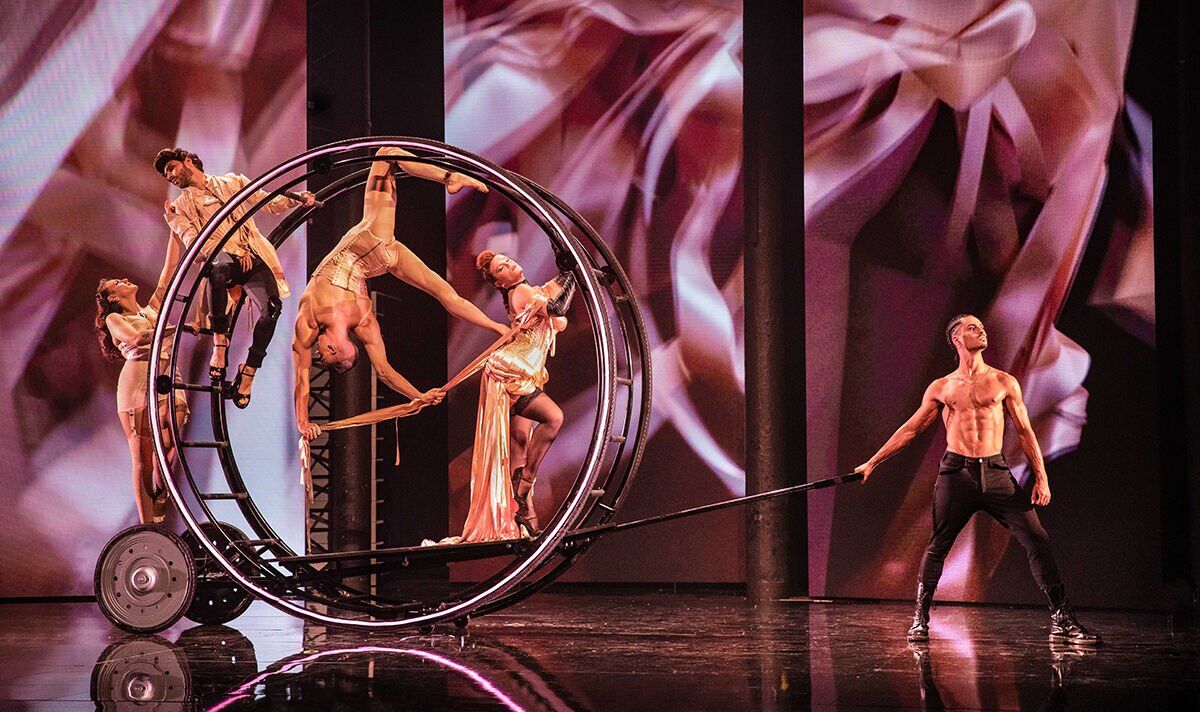 The one-time enfant terrible of the fashion world has lost none of his irrepressibly infectious joie de vivre. At 70, as he stood before a cheering crowd, he still radiates a wide-eyed, child-like delight in everything he does. He may, perhaps, always be best known as the man who brought us Madonna in pointy underwear, but he also represents a profound celebration of difference, of diversity, of revelling in who you are and not letting the world or even designers dictate it to you. “We can use fashion and not be used by fashion,” he tells us, followed by his rallying cry of: “We are freaks and freak is chic.” All that and more is clear from the moment the show opens with performers in giant teddy bear costumes sporting, naturellement, conical bras…

The entire spectacle is a hybrid of fashion, theatre and the designer’s own unique sense of fun. It is a peek inside his head, which we are told contains “a tiny mind filled with muscle bears and sexy nurses.” Hence the bonkers opening number.

From there it is a riotous romp through his life via huge screen projections showing magazine covers, artwork or humorous video inserts, alongside the main on-stage set-pieces. It all whirls us from a young boy in trouble for doodling at school (but always encouraged by his doting grandma, later seen can-canning), through struggling early designers days filled with rejection, on to heady success and then the heartbreak of the AIDS era.

The main stage includes, of course, a huge catwalk which bisects the cabaret tables on the main floor. Gorgeous corsetted men and women writhe to a sensual version of Light My Fire (the live singers are sensational throughout) before a Josephine Baker segment segues into lucha libre fighters with feather boa headdresses and wings cavort to a pounding club beat.

We get a full recreation of Gaultier’s debut 1976 fashion show which horrified purists with its use of street style, common fabrics and even bin bags. Later on, there is another lavish recreation of the designer’s first male couture show that once again titillated and outraged, this time with a  blurring of gender norms. His groundbreaking influence on male styling can be seen everywhere these days, particularly at avant garde events like the Met Gala.

As well as pure fashion, there are also vibrantly staged underground club scenes, vogue ball dance-offs and a look behind the scenes at the cut-throat world of fashion show model audition.

It all builds to a grand finale with a stirring video montage of Gaultier’s greatest pop culture months and then a catwalk parade of some of his freakiest (but chicest, darlings) outfits, before the models start to peel off their clothes on stage.

This is fashion dressed to its craziest nines and then stripped bare, a reflection of the many facets of the man himself. The entire show is certainly spectacularly staged but the cavernous, industrial bleakness of the Roundhouse perhaps diminishes a little of the impact. However, this is undoubtedly a party for fashion lovers and a fitting celebration of a unique and special talent.