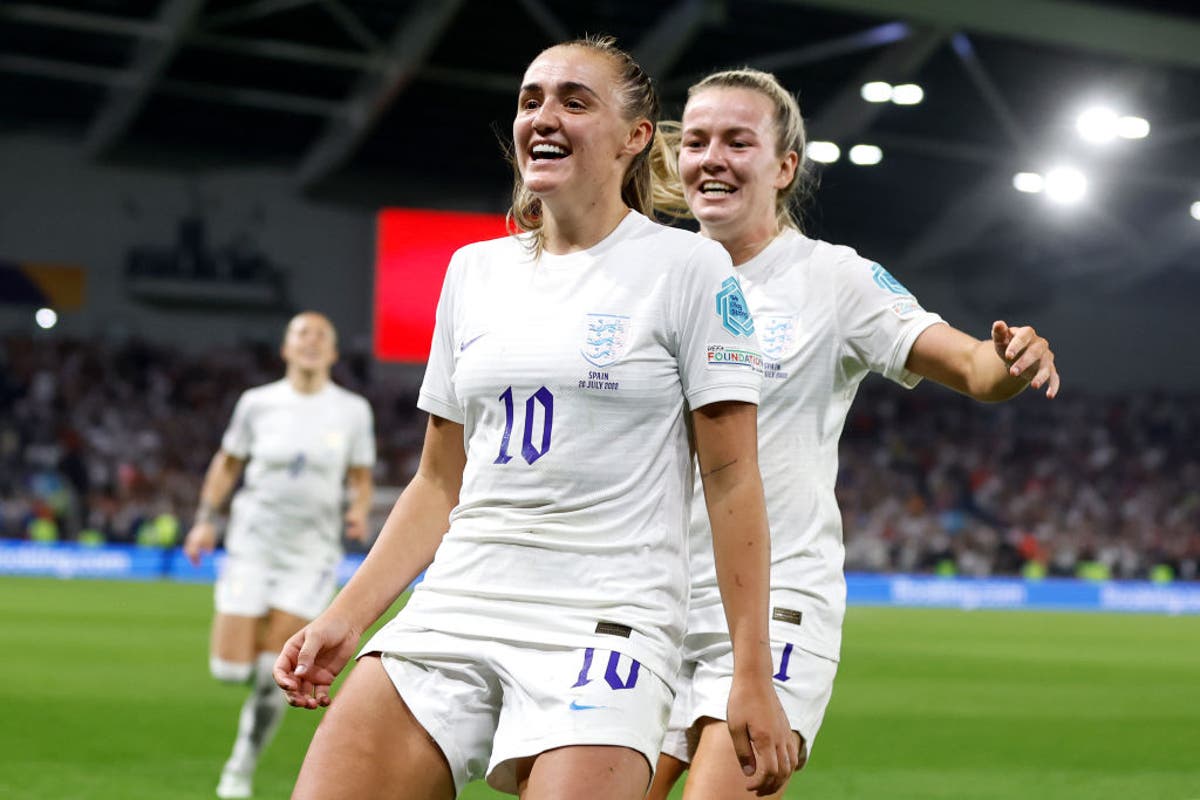 Georgia Stanway gets the goal her tournament deserves, England – so creditably, so resiliently – get to the semi-finals.

The show goes on thanks to a great show of character. Because, in so many ways, what actually made this 2-1 quarter-final win over Spain all the more impressive was that England were so often second best. It was certainly far from their finest performance. That, however, at once made it the game of the tournament while drawing out some of England’s best qualities; the sort of intangible strengths that really create champions; the kind of qualities that only come out on nights like this when the tension of it all is more exhilaratingly suffocating than the summer weather.

It all set up the sweetest and loudest of celebrations in Brighton, something beyond what Euro 2022 has offered so far.

Sarina Wiegman, meanwhile, had to find another way. One of the big debates from this victory will be whether she now has to play another starting XI – with the most prominent change in attack, and maybe midfield given the worrying sight of Keira Walsh going off deep into extra time.

For now, in the immediate aftermath of such an important win for reasons way beyond this tournament, all that matters is the victory that came from her changes.

Ella Toone claimed the equaliser. Alessia Russo will now surely force her way into the team.

From so much frenetic energy, though, there was one fixture who stayed firm to rise above it all. That was the star who has perhaps now confirmed herself as the player of this tournament, in Stanway.

Fittingly, her extra-time winner soared into the net, a visual representation of England’s feeling during this game.

It was a rare moment of pure release in these 120 minutes, though, that made it all the sweeter.

Even Stanway had looked like she might be overshadowed by Aitana Bonmati. England were for a long time overwhelmed by Spain.

Wiegman’s team were given the test they badly needed from the first round, but were ultimately denied. It came very close to denying them a place in a semi-final for the first time since 2013.

What might that have said about Wiegman as a tournament specialist?

It should not be forgotten that there were long stretches when the game threatened to become something much worse than a test, after all. That should be the biggest lesson for England from this.

That is really what makes the win so special.

There were long periods where it looked like it might become a Spanish exhibition. They immediately began like they knew they were better technical footballers. That was only emphasised with how, in the rare moments in the England half when Spain didn’t have possession, they were intensely pressing that backline and forcing errors. Wiegman’s team just couldn’t play it from the back to the same level.

Aitana meanwhile looked on a different level. She was commanding the game in the manner of the vintage Spanish midfielder she is, almost all play emanating from her feet.

As is also vintage with Spain at this point, though, it meant their game required a lot of patience. They continue to produce so many creators but so few finishers, something all the more pronounced with no Alexia Putellas.

They had so much possession but were so susceptible to sudden breaks, as was warned with Ellen White’s disallowed goal. It ensured that moment gave England something, even if it wasn’t a goal. Already prone to crosses, Wiegman’s side began to get even more direct. That almost served as the game’s Chekov’s gun, waiting to be fired.

Spain, having seen their domination dented a little, realised they needed something different. Athenea del Castillo was introduced at half-time. That indeed offered the difference.

It was her release on the right that finally created sufficient space in the box, squaring for Esther Gonzalez to touch and finish. It was a moment that represented a real release for Spain, given how they’ve toiled with possession at times, but wasn’t one Rachel Daly will look back on too fondly.

Spain started to totally focus on that side.

England had to focus on direct balls. Wiegman had to make some big calls. All of Beth Mead, White and Fran Kirby were taken off. So, understandably, was Daly.

One question from all this will be about White’s starting place, over Russo.

It was another substitute in Toone who offered the equaliser, though, but only after the innovation of Stanway.

That reflected how it wasn’t all directness from England. Stanway’s touch steered the move, before Toone steered it in.

Spain felt there was a foul. They began to lose their composure. The truth was they were being battered back, their confidence being crushed by aerial balls along with their composure and entire gameplan.

The game was only going one way in those final minutes of normal time. Spain badly needed the break.

It means, after some drops, after considerable worry, after the threat of the greatest of disappointments, England keep soaring. So does the mood around this tournament. Wigeman proved herself a tournament specialist in another way. England may well have really proved themselves as champions. This was the sort of win they needed. Stanway offered the moment they needed.