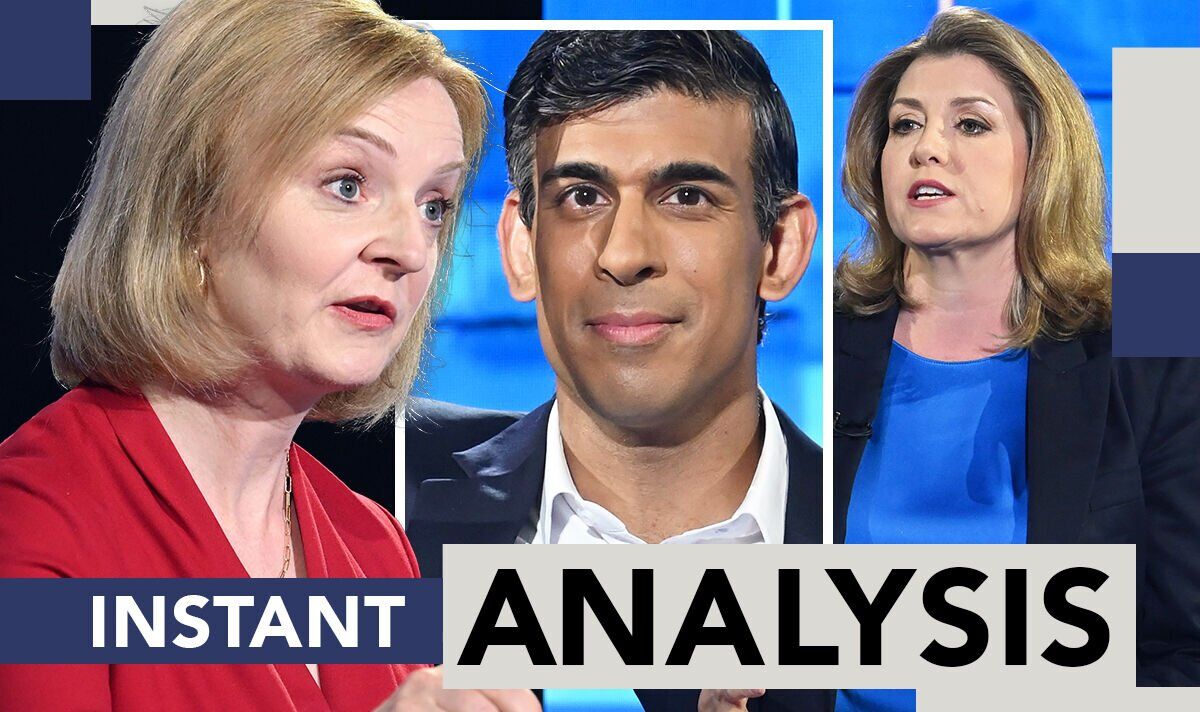 Worse still comes with an analysis of where the new votes arrived from.

The last candidate to be dumped from the competition was the Brexiteer champion Suella Braverman and she urged her 26 supporters to back Ms Truss in line with calls from the ERG.

But instead, Ms Truss’s vote only rose by seven while the surprise sensation Kemi Badenoch, who was a communities minister with no cabinet experience, picked up nine.

Meanwhile, Mr Sunak picked up 14 with Ms Mordaunt dropping one and Mr Tugendhat losing one.

The question now is where the remainder of Mr Tugendhat’s dwindling support goes with a feeling that it could now see a surge in backing for Ms Mordaunt.

However, while Mr Sunak risked his career by supporting Leave in 2016 he was being portrayed by the ERG as BRINO (Brexiteer in name only).

The result tonight tells us that many Brexiteers did not agree with this assessment and decided that, after the two televised leadership debates, he was a proper Brexiteer and the only one who looks like a Prime Minister.

There is no doubt that the promise over the weekend to slash EU red tape in his first 100 days helped him a lot.

As the result came in I was sitting in the GB News green room with Sunak MP supporter Richard Holden who could not believe how well his man has done as he punched the air.

The issue now is not whether Mr Sunak gets to the final two – but who will join him.

There is a chance that the woman who grabs the last spot could win the contest because there is still anger among members about how he resigned from Boris Johnson’s government.

There had been fears in the Mordaunt camp that two lacklustre debates would mean she went backwards significantly.

A loss of one will be a relief to her supporters and leaves her in prime spot.

DON’T MISS
Tory MPs begged leadership candidates to stop TV debates [INSIGHT]
Kemi Badenoch IS perfect candidate to be PM – POLL [REVEAL]
Have Your Say: Should the next PM raise taxes or lower them? [REACT]

With Ms Truss floundering still despite a much improved performance in the Sunday evening debate, the Foreign Secretary faces a struggle to win.

The key is what happens to Kemi Badenoch’s votes if she loses tomorrow.

But there may be a few MPs wondering now whether Ms Badenoch represents a better chance of beating Ms Mordaunt in the final.

Badenoch backer Michael Gove was quick to point out that only seven Tory MPs needed “buyers’ remorse” and switch from Ms Truss to Ms Badenoch and the Foreign Secretary is out.

It could be a significant 24 hours and one where Mr Sunak must be thinking about measuring the curtains for Downing Street.