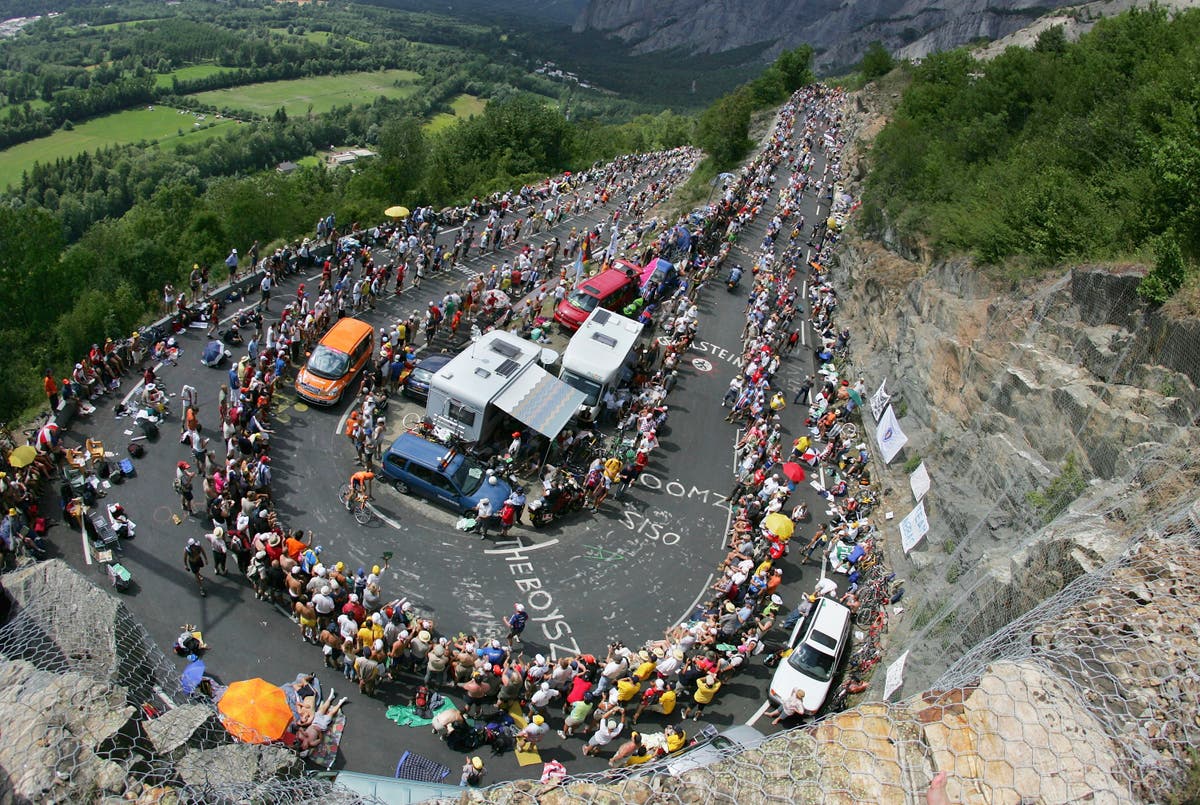 A few months after winning on a raucous Alpe d’Huez wearing the yellow jersey, Geraint Thomas snuck back to the place of his greatest triumph to check if it had really happened. Signposts on each of the Alpe’s famous 21 switchback turns bear the names of riders to have conquered the Tour de France climb with victory at the summit, and immortalised among the greats like Fausto Coppi and Bernard Hinault, Thomas found his own name written on the 13th bend.

Presumably whoever was in charge of the Alpe’s signage was not a cycling fan, because the Welshman climbed halfway up only to discover his name had been written the wrong way around – “Thomas Geraint”. Today, if you look closely, you can still see where the correction was later printed on top to hide the initial mistake.

Thomas was not impressed when reminded of that fact by The Independent on Wednesday morning, but you can be sure he will still afford himself a moment to look up near the climax of Thursday’s stage 12 to check it’s still there. It was the defining moment of his 2018 Tour de France victory, and winning atop Alpe d’Huez remains one of road cycling’s greatest feats (Thomas is unique in doing so while wearing the maillot jaune).

It may not be as high a peak as the Col du Tourmalet, nor as long a climb as Mont Ventoux, but Alpe d’Huez is the iconic Tour de France ascent, one with its own folklore and an unrivalled atmosphere, where more than half a million spectators pack the mountainside, overflowing into the road, and where screaming fans can reach out and touch their heroes. For one afternoon every few years it is the greatest sporting arena in the world.

The party mood on the “Dutch Mountain”, dubbed so for the horde of orange fans it attracts since the Netherlands’ success during the 1970s and 1980s, has sometimes boiled over on sunny days when the drinks flow. Vincenzo Nibali was wiped out of the 2018 Tour by a fan’s stray camera strap, almost 20 years after another camera-wielding spectator knocked runaway leader Giuseppe Guerini off his bike – he was able to remount and claim his prize.

The climb is nearly 14km (9 miles) long averaging more than an 8 per cent gradient, demanding around 45 minutes of gruelling output from Tour professionals (well over an hour for most amateurs). The low road kicks up above 10 per cent in the steep opening section, then flattens into six sharp hairpins one after another, constantly changing direction to render any tailwind obsolete. The road tilts up again after Huez village, before a short run to the finish.

This week the Alpe waits at the end of a long 165km (103 miles) stage, which features the cloud-high Col du Galibier at its start, and Europe’s heatwave will only make the climb harder. As the stage’s 1977 and 1978 winner Hennie Kuiper recalled: “I can remember looking ahead and willing for patches of shade to come.”

Denmark’s Jonas Vingegaard will begin the day in the yellow jersey with designs of replicating Thomas four years ago, and he is fancied to do so after his dominant stage 11 win which decimated the lead of reigning champion Tadej Pogacar. Of course, Pogacar loves a sense of occasion and will have his own ideas of glory in what is his first race up Alpe d’Huez.

“I’ve been there just for the recon, and it’s really such an iconic climb,” Pogacar told The Independent recently. “The atmosphere on this climb will be amazing so I’m really looking forward to it. I think either way, I will enjoy the stage because it’s pretty beautiful.

“[The fans] are what makes the sport even more beautiful. In training you’re all the time alone, you’re always fighting with your thoughts, but in the race when you have so many people around you cheering you on, you get that extra bit I think, and it’s when you’re at the limit and so when many people cheer on you so loud, it gives you more energy.”

It is a route which leaves behind lasting memories, from Coppi storming clear to win the first in 1952 to Lance Armstrong’s self-titled “coup de poker” when he bluffed rival Jan Ullrich and left him behind at the foot of the climb (a win later wiped from the record books). Perhaps its most famous image is from 1986, when teammates Hinault and Greg LeMond fought all the way up only to call a truce at the summit and cross the line arm in arm.

New stories will be written when the Tour takes on Alpe d’Huez for the 30th time, and a new name will likely be added to the road’s hall of fame. The 12th bend is the next signpost awaiting a winner. Organisers beware: Jonas Vingegaard and Tadej Pogacar are not easy to spell.