The “deepest and sharpest infrared image of the distant universe to date” has been revealed.

The picture was made public by NASA and is the first to be taken by the world’s most advanced telescope, the James Webb Space Telescope (JWST).

“We’re looking back more than 13 billion years… and we’re going further… this is just the first image and since we know the universe is 13.8 billion years old, we’re going back almost to the beginning,” NASA administrator Bill Nelson said.

“It is going to be so precise you are going to see whether or not planets are habitable. And when you look at something as big as this we’re going to be able to answer questions that we don’t even know what the questions are yet.”

The picture released tonight shows a galaxy cluster called SMACS 0723 and is the first of several to be revealed over the next few days.

It is the farthest humanity has ever seen in both time and distance, closer to the dawn of time and the edge of the universe, with part of the image showing light from soon after the Big Bang.

JWST isn’t just an upgrade on the 32-year-old Hubble space telescope. It’s an entirely new way of looking at the universe.

The light-gathering ability of the telescope – the best measure of its power to “see” things – is more than twice that of Hubble. What’s more, the $10bn machine is designed to see objects using infrared light.

Though it’s invisible to the human eye, infrared is the colour of the oldest and faintest objects in the universe.

Scientists and engineers from three space agencies, NASA, the European Space Agency and the Canadian Space Agency, worked for 20 years to complete the telescope.

Along the way, several moves were made to cancel the mission as costs and deadlines were exceeded.

The first major challenge for JWST’s designers was to get a telescope bigger than two double-decker buses side-by-side into space in the first place.

That required Webb to be folded in on itself, origami-style. Its massive 6.5m polished gold mirror was even made so it folded down into three segments.

To the surprise of even some of those who built it, JWST unpacked itself flawlessly once safely in orbit in January – with each segment of its mirror now perfectly aligned. 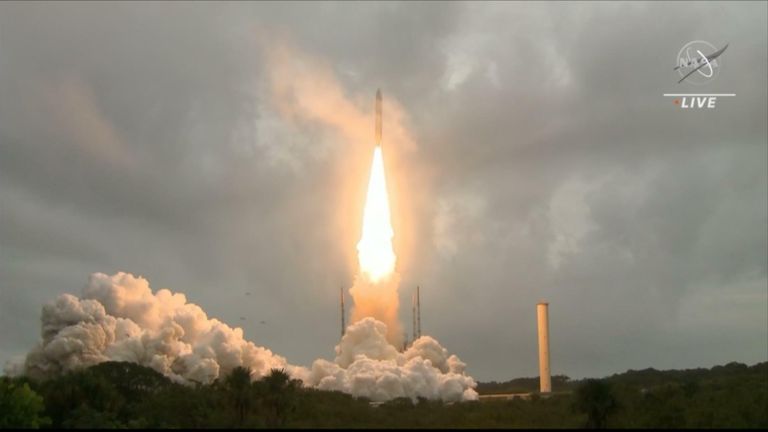 The next challenge was ensuring Webb was cold enough to “see” infrared light – any warm object produces it.

Though space is cold, one glimpse of the Sun’s rays or stray waste heat from its own systems would blind the telescope’s infrared vision much like the headlights of an oncoming car at night.

JWST’s instruments are cooled to -267 centigrade. To shield it from the Sun, the telescope orbits the Earth on the other side of the Moon, cloaked in its shadow.

Its instruments are also protected from and stray heat by five layers of tennis court-size sun shade that also unfurled once the telescope was in orbit.

While scientifically important in their own right, today’s image and those that will follow tomorrow, are very much a first glimpse.

They were chosen to showcase JWST’s capabilities to an entire generation of scientists that will use the orbiting observatory – and also to the public that paid for it.

Many breakthroughs in astronomy and astrophysics come after multiple observations of distant objects over months or years.

This is particularly true when studying distant worlds in other solar systems. But can we really expect a 13.8 billion year-old universe to give up its secrets quickly?

‘Games come to life’: Is this how we’ll watch the next World Cup?

Chinese astronauts land back on Earth after six-month mission