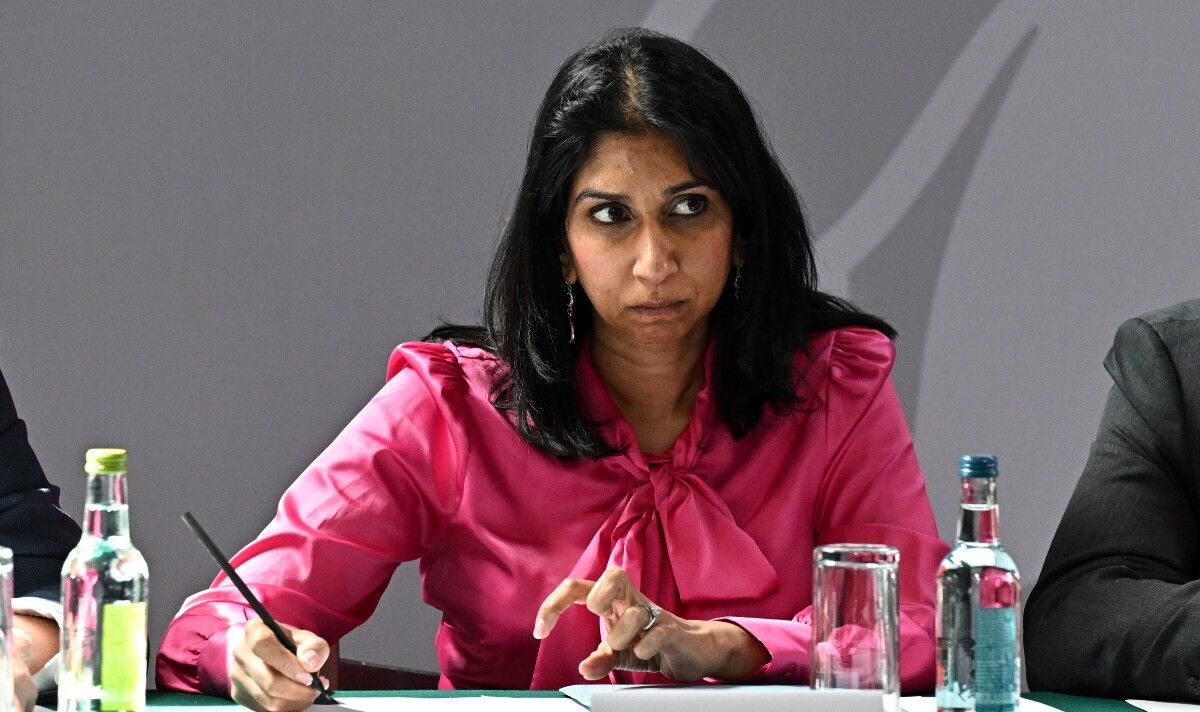 The row has gone straight to the heart of the Conservative leadership contest because the minister putting the bill through is Ms Mordaunt, now a rival to be Prime Minister.

Ms Mordaunt is understood to support wider trans rights in terms of not trying to define whether only women can get pregnant or who can take part in female sports events.

The issue is part of the so-called “culture war” and was underlined when the International governing body for swimming banned swimmers who were born male from taking part in female-only events if they were still male when they had entered puberty.

The issue has also seen abuse targeted at the author J. K. Rowling who has stood up for women’s rights against those of trans people.

Recently she was excluded from a 25th-anniversary celebration of the first Harry Potter film because of objections over her stance.

But one of Ms Mordaunt’s backers, Scottish MP John Lamont, has hit back that she is “the woke candidate”.

He told Times Radio: “Penny’s position is very clear. It’s about respecting women’s rights. It’s about respecting the rights of trans people, as well, I think that’s where most people in society are, as well […] it’s understanding that there are sensitivities around this, but equally recognising that everybody, regardless of how you define yourself should be able to live freely.

“And we should all be respecting one another in that environment.”

In a personal statement, Ms Braverman made it clear she would side with biological women over trans rights in an increasingly heated debate.

Referring to the law passed last year to ensure she did not have to resign as Attorney General, Ms Braverman spoke of her frustration at the way woke civil servants were intransigent on the issue.

While not naming Ms Mordaunt she is also being blamed by supporters of Ms Braverman as the minister responsible for taking the Bill through Parliament.

In her introductory remarks, Ms Mordaunt said: “Let me say from this dispatch box that trans men are men and trans women are women.”

In a statement, Ms Braverman said: “In 2021 I was pregnant with my second child. Due to an anomaly in the law, although junior ministers could take maternity leave, cabinet members in effect could not. Boris Johnson sought to change this and secured cross-party support to do so.

“Had the law not been changed, I, as a woman who gave birth while a member of the cabinet, would have had to resign. Or return straight back to work immediately after giving birth. Clearly changing the law to reflect the real-world challenges women in the workplace face was the right thing to do.

“Unfortunately, the legislation didn’t refer to a ‘woman’ giving birth, it referred to a pregnant person. Anyone who has given birth will know how intense your feelings are both about your own body and that of the child you’re carrying. To have my female body referred to as being that of a ‘pregnant person’ was distressing and unnecessary in law.

“I’m grateful to the many colleagues, both male and female, who objected to the Cabinet Office, who were responsible for this bill, insisting on this wording. Fellow ministers and parliamentarians spoke up for accuracy, both in terms of anatomy and drafting legislation. Sadly, the Cabinet Office refused to take these concerns on board.”

Have Your Say: Which Tory leadership hopeful do you trust with Brexit? [REACT]

She went on: “As a result of the intransigence of the Cabinet Office, what should have been a sign of progress, became a bitterly contested bill. Instead of passing without opposition, the refusal of the Cabinet Office to compromise meant that I was due to go into labour on 7 March 2021, but the bill still hadn’t come into law in the first week of March.

“Rather than being an uncontested celebration of women in the workplace getting on with the job, this bill was hijacked for Trans activists who insisted that I had to be referred to as a ‘pregnant person,’ and not what I was and am – a mother.

“To this day I don’t know why those responsible for allowing the bill’s progress to be needlessly delayed to the week of my due date did so. However, that an indulgence of extremism was responsible was obvious.

“In the Lords, peers who carry no candle for me spoke up tellingly. Robert Winston explained clearly what a woman was and how she gave birth. David Pannick forensically disposed of the drafting inadequacies of the bill. I am truly appreciative that the House of Lords obliged the Cabinet Office to see sense days before I gave birth and finally change the wording to ‘mother’.

“We have gone through a very unhappy season in British politics where inaccurate recall of uncontested facts has badly hurt our party. It is my hope that just as we should call pregnant women what they are, we will all of us accurately recall what we did and said in office.”

The issue is set to be one of the defining ones of the Tory leadership contest which has split liberal Conservatives against social conservative Conservatives.

The row could also drag in Foreign Secretary Liz Truss who was also in charge of the women and equalities brief but insisted she was not consulted over the wording of the maternity bill last year.