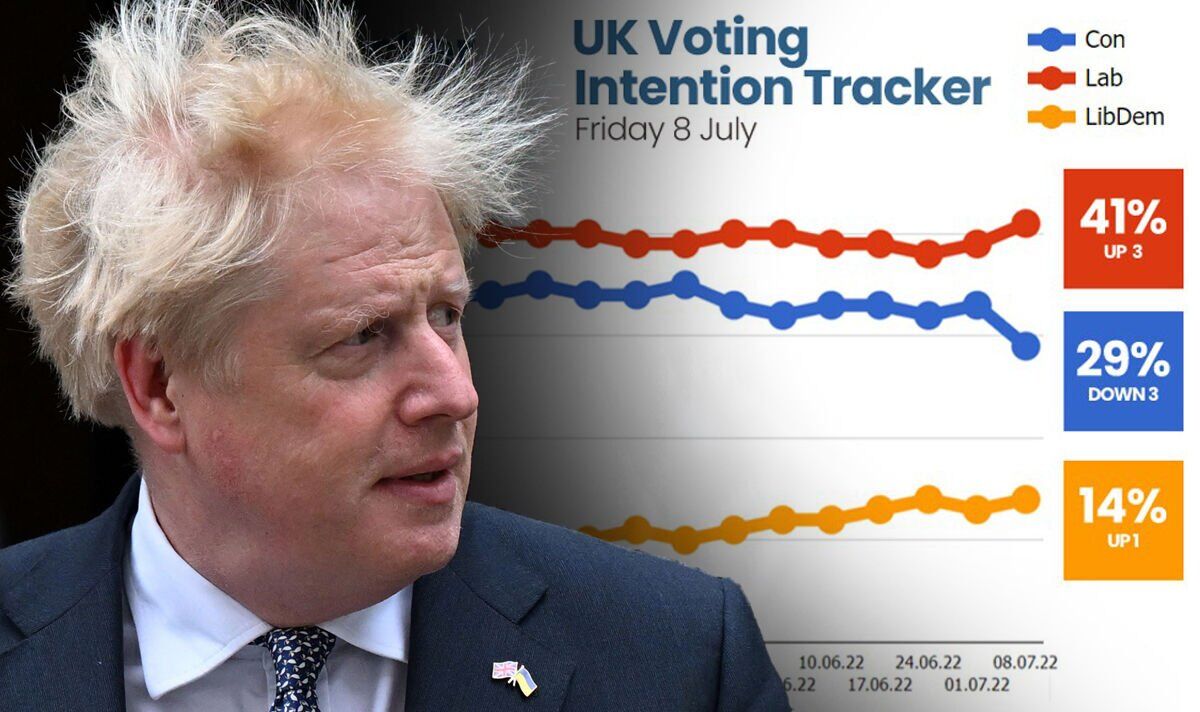 The result came on a day where weeks of speculation about Labour leader Sir Keir Starmer’s future came to an end after Durham Police cleared him of breaking lockdown rules when he and his deputy Angela Rayner along with 15 others consumed £200 of curry washed down with beer in a prearranged event.

The poll showed that after dozens of ministers quit Mr Johnson’s government voter confidence had completely collapsed in the Conservatives.

Confidence among Leave voters from 2016 was also down to just 15 percent.

If the poll was repeated in a general election the Electoral Calculus website calculates that Labour would have a majority of 46 seats with 348.

Chief Executive of Techne Michela Morizzo said: “This is a big gap. The next leader who replaces Boris Johnson will have a tough time trying to recover from this position.”

The Conservative leadership election now looks set to run into the summer with hopes that they can present members with two candidates by the start of the summer recess.

Mr Johnson remains in Downing Street until a replacement is found.

Polling took place in the 24 hours around Mr Johnson refusing to resign and then agreeing to step down in a defiant speech on the steps of Downing Street surrounded by family, friends and supporters.

Techne asked 1,624 adults from across the UK in different social and age groups.

READ MORE: NEW poll shows Boris is still the most popular in America

Meanwhile, Starmer celebrated a good week by also announcing that he would not accept any deal with Nicola Sturgeon’s separatist SNP and its plans to hold a referendum next year.

But Tory MPs, especially those in the Red Wall, are delighted that Starmer was not fined and then forced to resign as a consequence.

One Red Wall Tory MP messaged to say: “It’s the best thing that has happened all week. Starmer is very unpopular here, has no charisma and is not cutting it with the public.”

Even Labour MPs had been briefing that he is “too boring” and “dull” when some were privately hoping he would have to follow his promise to resign if fined.

Others are expected to join the contest over the weekend including Foreign Secretary Liz Truss, Home Secretary Priti Patel and trade minister Penny Mordaunt.