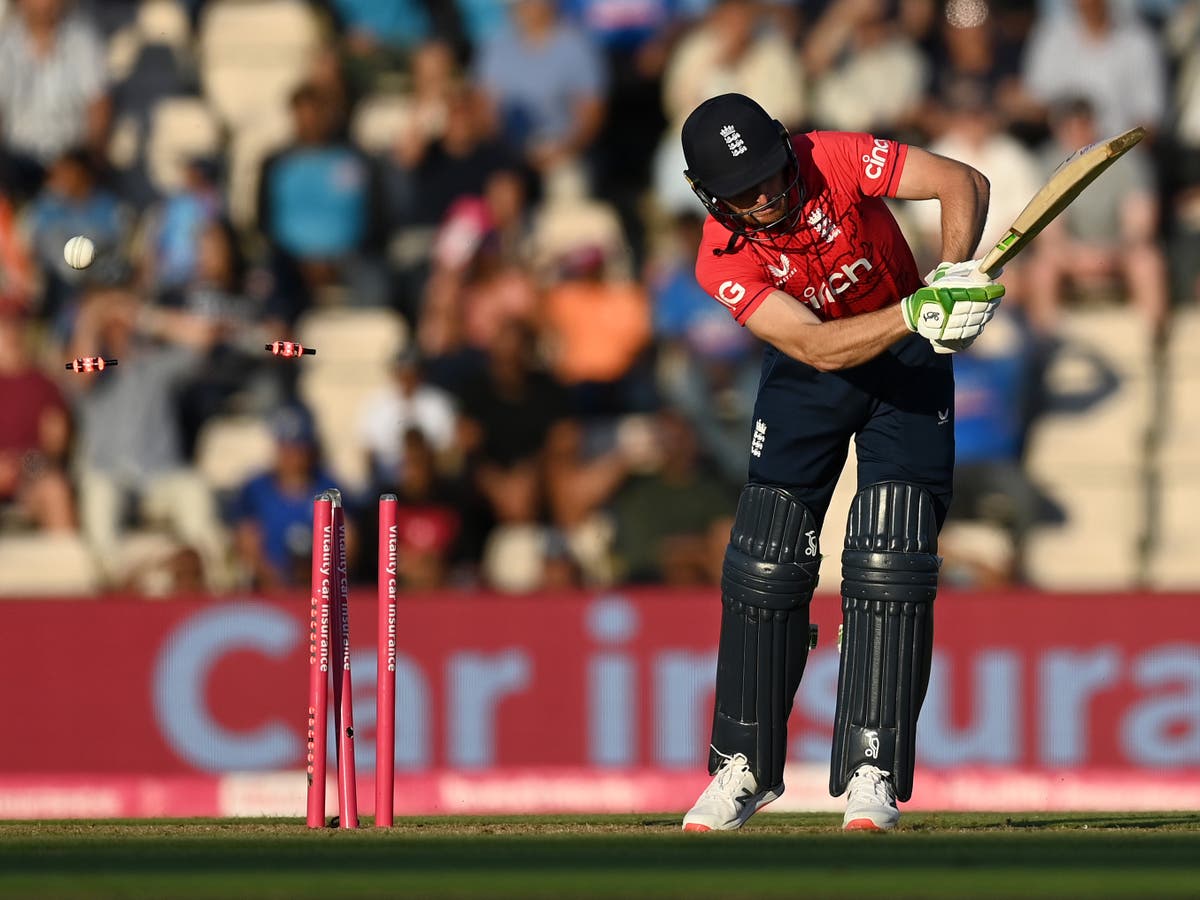 Jos Buttler endured a rocky start to life as England’s limited-overs captain after falling for a golden duck in his side’s humbling 50-run defeat by India in the first of three Twenty20s.

Tasked with continuing England’s white-ball success following Eoin Morgan’s international retirement, Buttler began by having his leg stump knocked back at the outset of the reply to India’s 198 for eight.

England lurched to 33 for four before eventually subsiding to a sorry 148 all out from 19.3 overs, with the excellent Hardik Pandya following up his 51 from 33 deliveries with four for 33 at the Ageas Bowl.

Jordan had a modest winter and particularly struggled at the death, but this was an impressive showing on an evening where England used seven bowlers, with Moeen Ali taking two wickets but leaking 26 in his two overs while fellow spinner Matt Parkinson and left-arm quick Tymal Mills were also expensive.

The total was always likely to challenge England, without Ben Stokes and Jonny Bairstow due to their Test commitments, and they received a hammer blow as Buttler was taken out in the first over.

Bhuvneshwar Kumar had troubled Jason Roy with deliveries zipping past the outside edge but then showed his immense skill to bring one back in through Buttler’s gate, the ball clipping the pad before lighting up the zing bails to leave the hosts demonstrably on the front foot.

It was a demonstration in swing bowling from Kumar and Arshdeep Singh early on but it was Pandya who struck the decisive blow, bowling Dawid Malan when he chopped on before Liam Livingstone’s attempted paddle four balls later merely caught the edge and was taken by wicketkeeper Dinesh Karthik.

Jason Roy made just four off 16 balls and his stay ended after a wild slash off Pandya was taken in the deep. Harry Brook and Moeen, in his 50th T20 for England, were both dropped in the teens and put on 61 with the latter particularly forceful as he cleared the rope off Yuzvendra Chahal and Axar Patel.

Any hopes of an England victory being resurrected were extinguished as Chahal removed both set batters, with Brook caught at midwicket for 28 while Moeen yorked himself, advancing down the pitch, and was stumped by Karthik.

The hosts struggled on – and Jordan continued his standout night with 26 from 17 balls – before they were put out of their misery with three balls remaining.

England are still basking in the afterglow of their four Test victories under Brendon McCullum and Stokes but it was India who seemed to take a leaf out of the “Bazball” approach after winning the toss on a balmy summer’s evening, relentlessly attacking despite a steady stream of wickets falling.

Rohit missed India’s Test loss after testing positive for Covid-19 but made up for lost time as he bristled with intent with five fours in 13 balls. But the gamble to turn to Moeen’s off-spin in the third over was rewarded when Rohit nicked off, undone by a quicker delivery and a bit of drift.

Moeen was powerless to stop Hooda uncorking a couple of straight sixes while Yadav got under way with a hard sweep to bring up India’s 50 after five overs. The pair continued to put England under pressure but Jordan proved a settling influence and removed both batters.

Hooda was deceived by a 69mph slower ball and could only help the ball to short fine leg while a brute of a bouncer trimmed Yadav’s glove and the “not out” decision was overturned on review.

England might have seen the back of the busy Hardik when he charged Parkinson and missed a full-blooded mow, but Buttler was wrong-footed by a tickle off the pad and could not complete the stumping. Hardik continued to motor along, cleverly piercing gaps in the field to bring up a 30-ball 50.

He eventually perished after going aerial before Jordan conceded just five in his penultimate over, finally slowing India’s charge. Even though they were unable to get 200, it proved more than enough.