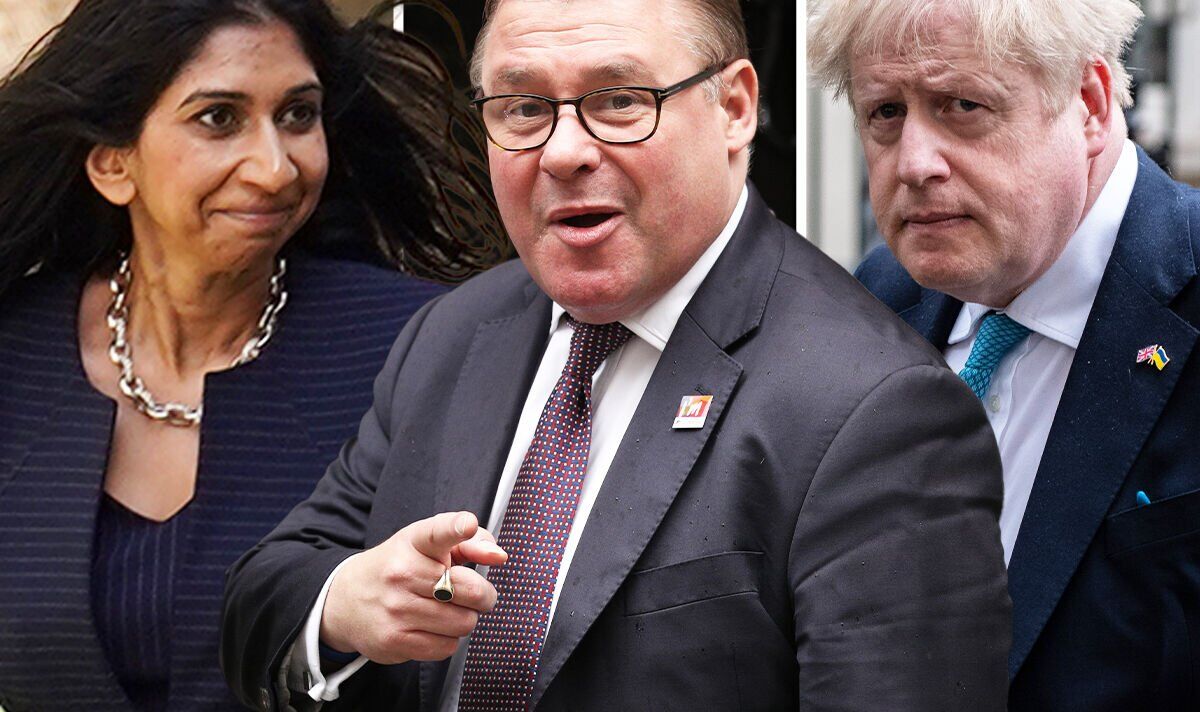 With Boris Johnson resigning in dramatic fashion on the steps of Downing Street after effecitvely losing the confidence of his party, European Research Group (ERG) chairman Mark Francois has led calls to ensure his replacement also backs Brexit to the hilt. The demand links both veteran MPs and 2019 Red Wallers where voters backed the Tories for the first time on the promise of “getting Brexit done”.

Speaking to Express.co.uk, Mr Francois made it clear that the process of “getting Brexit done” is far from complete, with opportunities from Brexit freedoms in many cases yet to be realised.

The Conservative MP for Rayleigh and Wickford said: “The decision on Boris’s successor will rightfully rest with our Party members but, given the great struggle to achieve Brexit since 2016, I would be very surprised if they picked anyone who everyone knows is still a devoted Remainer at heart.”

Veteran Brexiteer MP Peter Bone, who is stunned at the way Mr Johnson has been forced out of office, agreed. The Wellingborough MP said: “Yes, it absolutely has to be a Brexiteer.”

He plans to spend the weekend looking at the options before committing to a candidate.

But the push for a Brexiteer is expected to be a boost for the surprise first contender Attorney General Suella Braverman.

One senior ERG member noted: “She is more than a proper Brexiteer, she was one of the Brexit spartans [who held out against Theresa May’s sellout deal with Brussels].

“She is certainly somebody worth considering.”

Ms Braverman is a past ERG chairwoman and also a Brexit minister who resigned over Mrs May’s negotiations.

READ MORE: Nobody is too big to be fired and Boris should remember that well

It would rule out bids from former Foreign Secretary Jeremy Hunt and Foreign Affairs Select Committee chairman Tom Tugendhat, who both backed Remain in 2016.

One candidate who would need to persuade MPs she has genuinely changed from a Remainer in 2016 to Brexiteer now is Foreign Secretary Liz Truss.

But Red Wall MPs made it clear that backing Brexit and continuing to ensure its opportunities are used is essential.

Ashfield MP Lee Anderson said: “I am part of the Common Sense Group who will shortly be inviting leadership candidates to husting events.

“We have a large group of mainly pro-Brexit MPs who will have a big say on who becomes the next leader.

“Being a strong Brexiteer ticks a lot of boxes within our group as we want to see the next leader finish the job and take back total control.”

DON’T MISS
Boris’ biggest fear is to be compared to ex US President Donald Trump [INSIGHT]
Boris Johnson’s new Cabinet ministers in full – all new appointments [REVEAL]
Have Your Say: Boris Johnson to resign as PM – who should replace him? [REACT]

Dudley North MP Marco Longhi said: “If we are to form a Conservative government at the next election, we must respect the biggest ever democratic vote this country has seen.

“The next PM must be first and foremost a strong and resolute Brexiteer. This will be a red line for the Red Wall.”

Bassetlaw MP Brendan Clarke-Smith added: “Certainly couldn’t support anybody that even hinted at rowing back on any of our Brexit freedoms.”

The rules of the leadership competition are due to be set by the 1922 Committee on Monday with the first round of voting expected on Tuesday.

They hope to have a final two to put to all party members by the start of the summer recess and a new leader could be decided in August or early September.