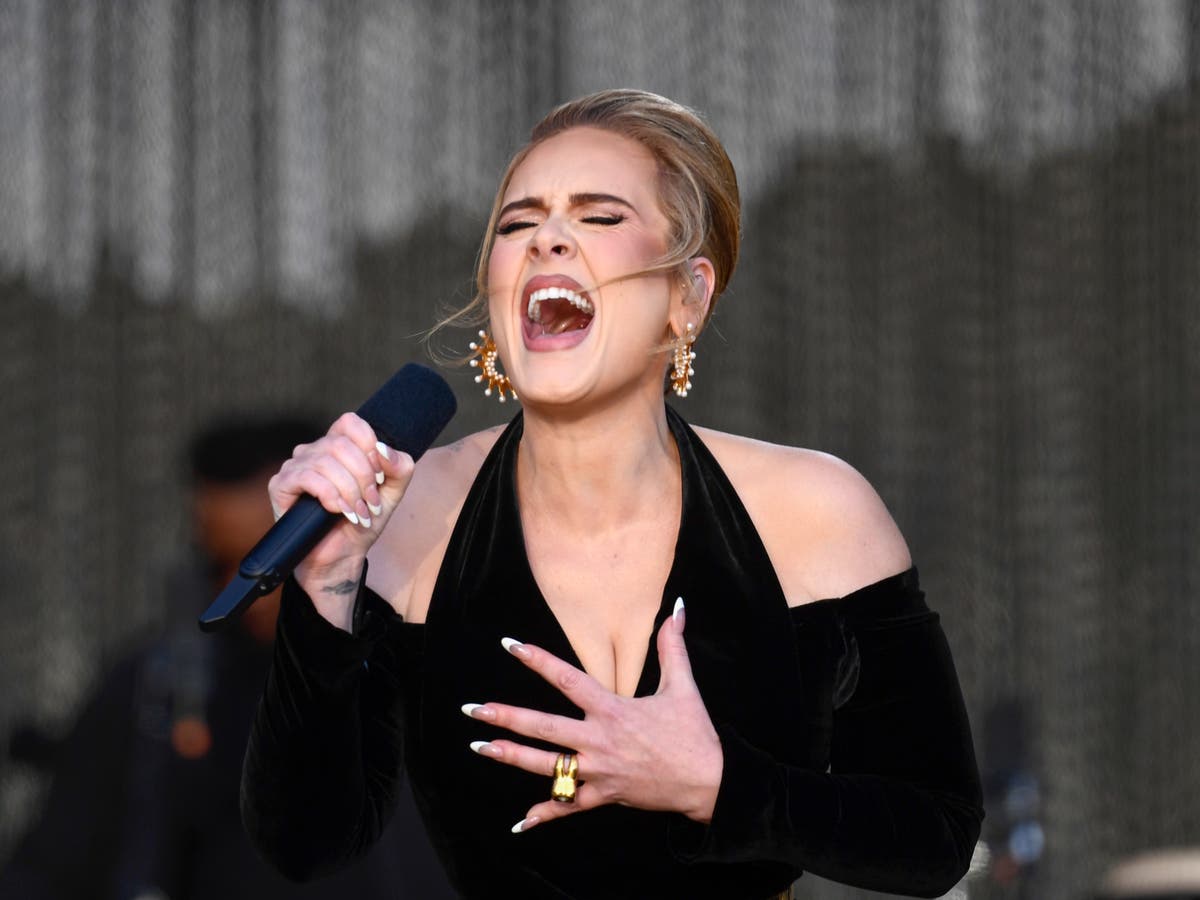 “It’s so strange to be in front of a crowd,” Adele babbles midway through one of many motormouth banter segments. For her first public show in five years, what a crowd to be in front of. Sixty-five thousand of the 1.3 million people who applied for tickets – the biggest ticket demand since Oasis at Knebworth in 1996 – cram the barriers to the increasingly exclusive VIP zones, with Tom Cruise reportedly spotted in the ultra-mega-costs-a-kidney-platinum-plus enclave. There’s nary a glass of lambrusco or a box of Kleenex to be had this side of Watford.

Sweeping onto the world’s biggest 1970s variety show set – all shimmering drapes and cascading podiums of backing musicians – in a black gown, Adele is almost immediately overwhelmed by the occasion, asking the crowd to help sing “Hello” while she composes herself. The audience, meanwhile, are themselves overcome with relief. As the biggest-selling female artist of the century, Adele has also shown signs of the vertigo many suffer at the very top. In January, she cancelled a Vegas residency just 24 hours before the first show, citing pandemic-induced “staging problems”. “I take my singing very f***ing seriously,” she’ll explain later. For now, Hyde Park is just happy to have her in it.

There’s a communal will for Adele to spectacularly pull through tonight. She is, after all, the ultimate relatable and aspirational everywoman icon, whose Pygmalion rise from her Tottenham roots to the heights of pop aristocracy has been built on beautifully laying bare her been-there-babes struggles along the way – with heartbreak, obsession, divorce, self-image and wine – and ultimately winning through. That she dedicates an uplifting orchestral “Hold On” to the friend in the crowd who introduced her to her new boyfriend Rich Paul, with whom she is “madly in love” is key; there’s always light at the end of Adele’s dark and deep emotional tunnels.

It’s a journey played out over two hours of lung-bursting soul, R&B, country funk and billowing piano ballad, sometimes wrapped in overwrought imagery – as on “Set Fire to the Rain”, resembling a maximalist Dusty Springfield and peppered with bursts of fireball that leave Adele asking “are my eyebrows still there?” – but often deeply perceptive and heartfelt. Grimacing away tears after the soft gospel “I Drink Wine” and the forlorn “I’ll Be Waiting”, she admits: “I haven’t got many uptempo bangers”, then plays them all at once “to get it out of our system”; sultry pop groover “Rumour Has It”, the chantable R&B of “Water Under the Bridge”. From there, it’s lovelorn, piano-led emoting all the way, via the tropical bop of “Send My Love (To Your New Lover)” and a bombastic bit of Bond.

It might be a dour and trying experience were it not for Adele’s fantastic, mood-lightening between-song banter. In a second, she’ll flick from empress of dark emotion to babbling hen-do mate on a train. Caring not a jot for the momentum of the show, she slurps tea and works the crowd like a redcoat pro – part pub cabaret compere, part Pam Shipman. Adele chats to the front row about anniversaries and holidays to Hawaii, offering to buy birthday drinks and lifting her frock to show off her “toddler socks”. We learn, among so many things, of her sciatica and slipped discs, that she plans to binge Stranger Things, saw Billie Eilish the other week and, contrary to tabloid reports, didn’t fall over while partying after her Graham Norton appearance in February. At one point she fires T-shirt guns into the crowd – “on the ’ead, oi, oi!” – before delivering earnest self-help advice. It’s a major part of her appeal; she’s the friend in the pub who happens to be phenomenally famous.

At the same time, it’s impossible to deny the power of Adele’s skyscraping voice, particularly when she takes to the end of the ego ramp alongside a grand piano (“like we’re in a hotel bar, innit”) for a stripped-down ballad segment including her delectable Dylan cover “Make You Feel My Love” and the stunningly relatable anthem of stoic stalking “Someone Like You”. When the confetti cannons go off during a rousing “Rolling In The Deep” and a Disneyfied “Love is a Game”, filling the park with fluttering paper hearts, it only makes physical the love in the air all night. You got this, babes.