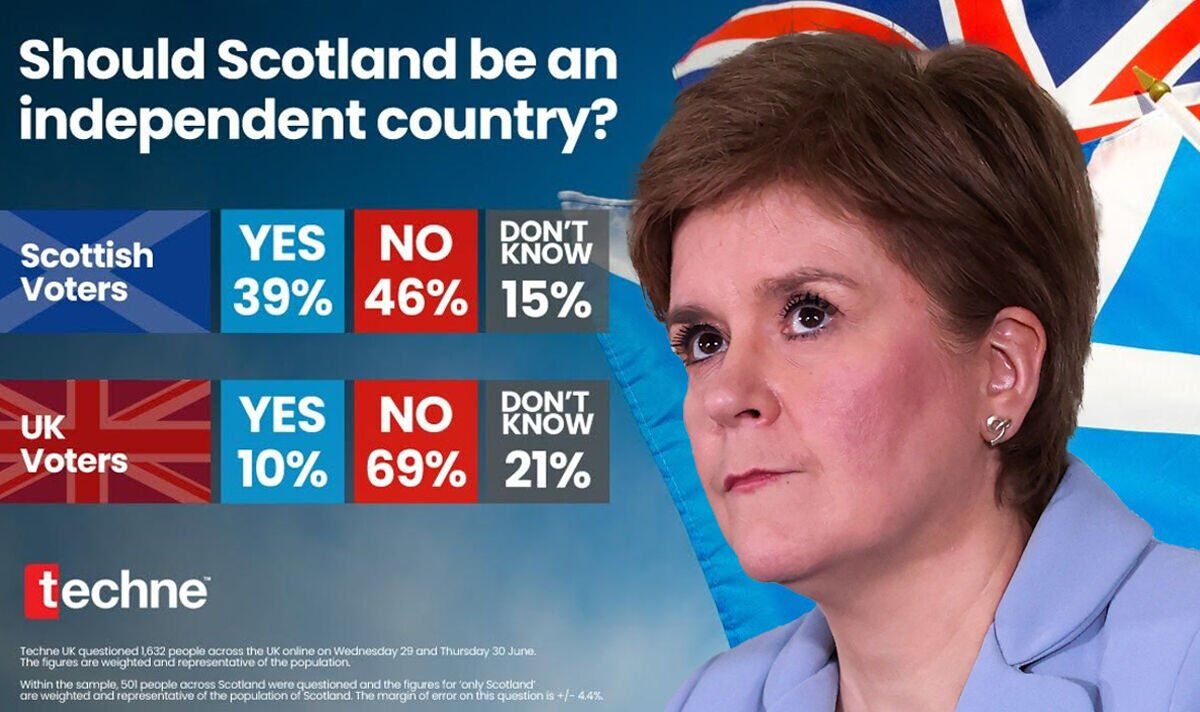 The findings are a blow to Scottish nationalists in the SNP who have been already under fire this week. Westminster leader Ian Blackford has faced calls to resign after criticism over his reaction to a sexual harassment complaint againt SNP MP Patrick Grady.

Mr Blackford has been under pressure after a recording of him urging colleagues to give Mr Grady “as much support as possible” emerged.

On Wednesday, the SNP Westminster leader apologised for the “completely unacceptable” behaviour the victim was subjected to.

There was private speculation that Ms Sturgeon decided to set a date for an independence referendum which the Scottish Parliament has no power to call as a means of distracting from criticism of her party and keeping the “fundamentalist wing” of her party happy.

The poll also revealed that support for Scotland remaining part of the UK is very strong right across Britain.

Of the 1,632 people surveyed on June 29 and 30, almost seven in 10 (69 percent) opposed Scottish independence while only 10 percent supported it.

The Scottish sample was an oversized 501 with a margin of error of 4.4 percent but revealed that when “don’t knows” were stripped out there is a clear majority of 54 percent to 46 percent in favour of Scotland staying part of the UK.

The findings mean there appears to be little change from when Scots rejected the idea in 2014 by 55 percent to 45 percent.

At the time, Sturgeon and the then SNP First Minister Alex Salmond agreed that a referendum was “a once in a generation” test but since then have tried to go back on that pledge.

Conservative MP and former Scottish Secretary David Mundell said: “I am very heartened by this poll. It shows that people here in Scotland and across the UK just want Nicola Sturgeon and the SNP to give us a break from this obsession.

“The majority have always been against independence and nothing has changed.

“I am confident that there will be no referendum on October 19, 2023 and this is just a distraction to keep the fundamentalists in the SNP happy.”

She said: “On first glance, these numbers will be encouraging for those who do not want the break-up of the United Kingdom, but those in favour of Scotland being an independent country will also find encouragement in this poll.

“Even on Nicola Sturgeon’s proposed timetable, we are 14 months away from any vote and the 15 percent who say they ‘don’t know’ will be the ones who decide the result.

“At this stage before the 2014 referendum, ‘no’ was much further ahead in the polls so the First Minister will believe the argument for independence can be won. Equally though, those opposed will think any lead after Brexit and with a particularly unpopular Prime Minister in Scotland is a strong base to build from for a referendum they do not want and which may not happen anytime soon.”