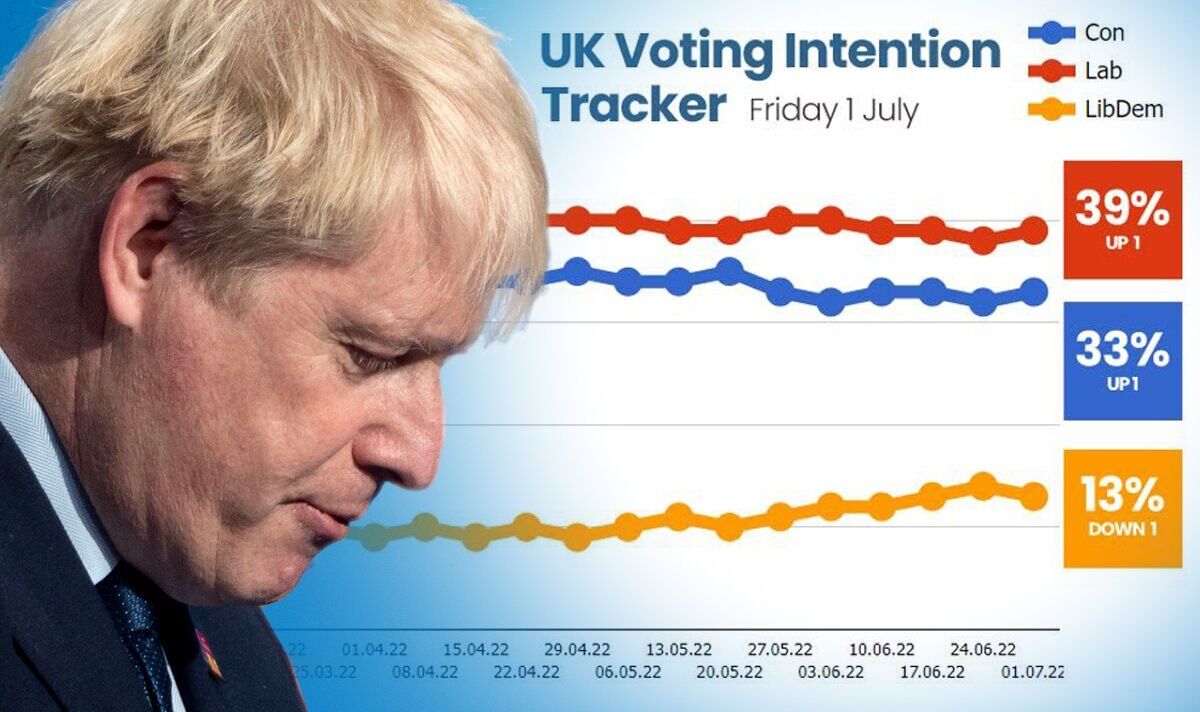 The polling comes in the wake of another scandal engulfing the Government with Deputy Chief Whip Chris Pincher resigning after, by his own admission, getting drunk and groping two men in the Carlton Club in London.

It leaves Mr Johnson with two vacancies to fill following the exit of Mr Dowden as chairman citing “disappointment and anger” by Conservative Party members.

The “disappointment” appears to continue to show in the polls with Labour up one point to 39 percent still six points ahead of the Tories even though they gained a point to 33 percent.

The Lib Dems are down one to 13 percent but confidence in Mr Johnson’s government remains at an historic low of just 29 percent, less than a third of those surveyed.

Meanwhile, a quarter of voters remain so disillusioned that they are unlikely to vote in a general election and even almost half of Leave supporters (49 percent) no longer back the Conservatives.

In bringing Mr Berry, the former Northern Powerhouse minister, in would give a more “red wall” focus to campaigning and new ideas.

It also might help bring over some of the rebels who are in the NRG and are part of the group trying to remove Mr Johnson as Tory leader.

And 20 MPs are understood to have called for Mr Berry to become the next party chairman.

According to supporters he is seen as a “straight shooting, slick media operator, cable of bringing the fight to labour,” the NRG chief looks favourite to replace Dowden.

Express.co.uk understands five of the 20 MPs are outside of the northern heartlands, where Jake oversees the largest cohort of MPs within the party.

One southern MP, who has been courted by several contenders, exclusively told the Express:

“Jake is well-liked, good in front of a camera, and understands voters.

“To kick on from all the mess, we need someone who can take the fight to labour, be aggressive, and bring fresh new policy ideas.”

An NRG member told Express.co.uk: “We saw at our conference that Jake has policy ideas, something which is desperately needed.

“He’s not your usual Tory, he’s relatable to voters, and brings with him a large support base. It’s a no brainer, the PM should appoint him asap.”

She warned that too many of the changes and actions were “incremental” and not of a “high enough intensity.”

But warning that none of the parties are inspiring voters, she said: “No party at the moment is able to field political proposals that are truly attracting the general public.”