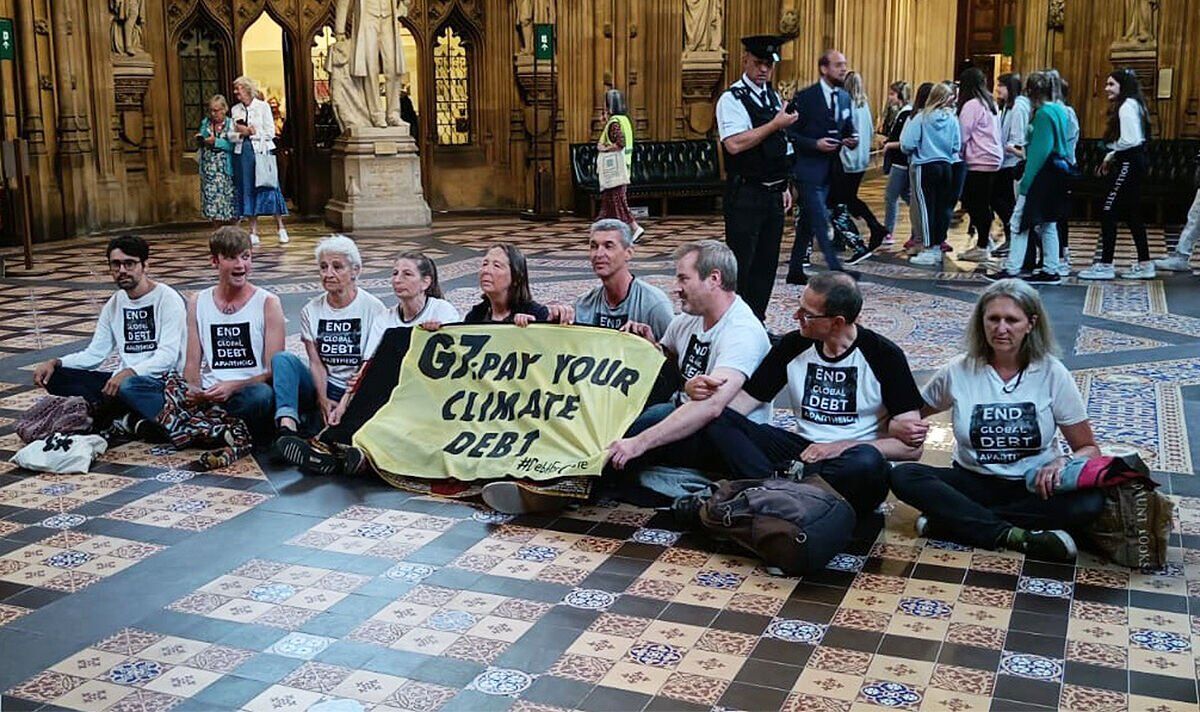 Nearly a dozen eco-zealots occupied the central lobby of the Westminster building. The group sat in the room at the heart of Westminster Palace and unveiled a sign reading “G7 pay your climate debt”.

Extinction Rebellion has risen in profile over the past five years after holding a series of extremely disruptive protests.

The group caused transport chaos in London in 2019 after activists glued themselves to tube trains, and made a scene in Trafalgar Square last year then they covered the iconic London landmark with red paint.

Extinction Rebellions was today protesting the G7 – whose leaders are currently meeting in Germany – for failing to take climate change seriously.

Leaders of Argentina, India, Indonesia, Senegal and South Africa were also invited to take part in the summit.

G7 countries, in a standoff with Russia after the invasion of Ukraine, have sought ways to plug energy shortages and tackle soaring prices while sticking to their climate commitments.

The three-day summit, which wraps up with a final communique on Tuesday, discussed ways of reducing coal use and scaling up renewable energies in a way that is “socially just”, the leaders’ statement said.

The leaders “agreed to work together to accelerate a clean and just transition towards climate neutrality, while ensuring energy security”, the statement said.

Environment activists have pushed Western powers to stay focused on climate change goals despite the war, as some European Union countries turned back to dirtier coal to meet their energy demand after a drop in gas flows from Russia.

Japan has also pushed to remove a target for zero-emission vehicles from a G7 communique expected this week, according to a proposed draft seen by Reuters.

Attacking the G7 for failing to take enough action, Extinction Rebellion claimed the leaders at the summit had left poorer countries with no choice but to extract fossil fuels in order to pay off their international debts.

DON’T MISS:
UK could be energy sufficient today but no, we had to pander to greens [COMMENT]
‘Activist’ BBC slammed over Extinction Rebellion coverage [REACTION
Insulate Britain scuppered: New law to crack down on eco mob [UPDATE]

The group further added that these countries would be the most likely to be impacted by the consequences of climate change.

In a statement on social media, the group said: “The people with most at stake in the G7’s decisions are denied a seat at the table.

“People of the Global South are choking beneath reinforcing crises of climate and debt, and we are here in solidarity to bring their message to the heart of British power.

“We demand that the G7 take the knee off the neck of the Global South by cancelling all debt.

“Countries of the Global South are left with no choice but to extract fossil fuels for export to pay their crippling debts.

“And every penny spent paying debt cannot be spent on renewables.”

“The G7 summit so far is a fossil fuel madness, and they drink champagne to that every evening here, and take nice pictures, family pictures, a family of fossil fuel addicted leaders,” 20-year-old Fridays For Future activist Dominika Lasota said.