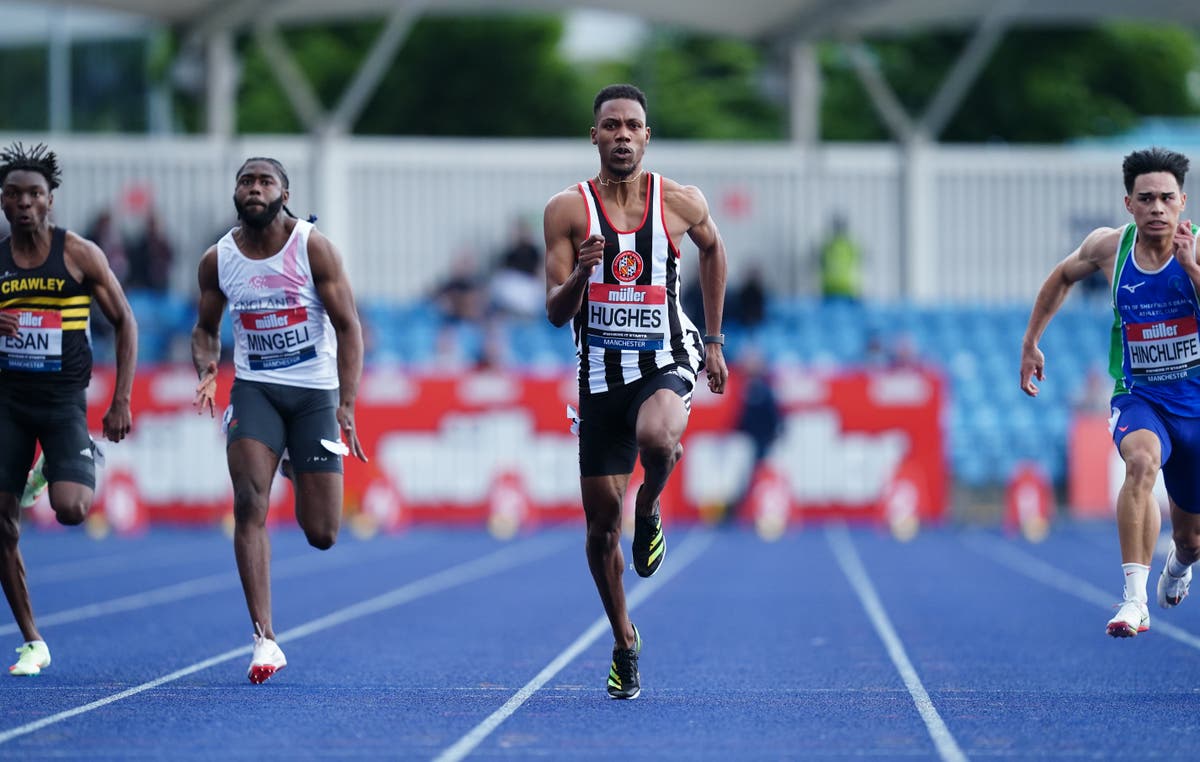 Zharnel Hughes has forgiven CJ Ujah despite being stripped of his Olympic silver medal.

European 100m champion Hughes was part of the 4x100m squad who lost their medal from Tokyo after Ujah failed a drugs test last summer.

“What do you want to hear? CJ is a great guy, regardless. What happened to him is unfortunate, sadly,” he said.

“I don’t show him any disrespect. I haven’t spoken to him in a long time but, the last time I spoke to him, he apologised and said sorry.

“I forgive him. Sometimes these things do happen, which is very sad in his case, but I wish him all the best in the future.

“I can’t change anything. It’s already gone. We’ve been removed from the history books. It’s sad – but I can’t do anything about it.

“I felt bad obviously. I was a part of the team so obviously I was going to feel it.”

Hughes, who also reached the Olympic 100m final only to be disqualified after a false start, ran 10.18 seconds to win his 100m heat at the British Athletics Championships in Manchester on Friday.

He will be joined in Saturday’s semi-final by Reece Prescod, who clocked 10.22 seconds in an easy run with the sprinter having clocked a huge personal best of 9.93 seconds in Ostrava last month.

“It just gave me a bit of confidence. The previous week I was a bit upset with the relay (a DNF in Birmingham) and then I took that momentum into the next weekend and went for it,” he said.

“It was nice to be in that kind of field and feel comfortable with it. There is so much to do this season and I want to do it bit by bit.”

Dina Asher-Smith eased into Saturday’s women’s 100m semi-finals after starting her countdown to the World Championships.

The world 200m champion, who will defend her title in Eugene next month, ran 11.16 seconds in the first round of the 100m as she looks to book another slot on the British team.

Asher-Smith is joined by Daryll Neita in the semi-finals after she ran 11.04 seconds to win heat three.

“The aim was to qualify, come back tomorrow and lift it a bit. I’m good, I’m excited, I’ve been wanting to do another 100m for a few weeks after Prefontaine (Diamond League),” said Asher-Smith.

“There are a few things I’ve been wanting to work on and what we’ve worked on over the past few weeks.

“I have some more technical things I want to make sure I get right in these races ahead of Eugene.”

The 26-year-old’s chances of improving on the silver she won in Doha in 2019 were already boosted after Sha’Carri Richardson failed to progress in the 100m at the US trials.

Keely Hodgkinson finished second in her 400m heat in 52.90 seconds, behind Victoria Ohuruogu, to progress as the 20-year-old uses the distance to build her speed for the 800m ahead of the World Championships.

“I’ve already got the auto qualifier for the 800m and I really wanted to compete but I thought I don’t have to do the 800m so I won’t. I wanted a challenge, the event is really deep,” she said.

“Because of the problems in the winter with the quads I haven’t been able to attack the speed work I wanted to. That’s the aim, work on the speed and see what happens.”