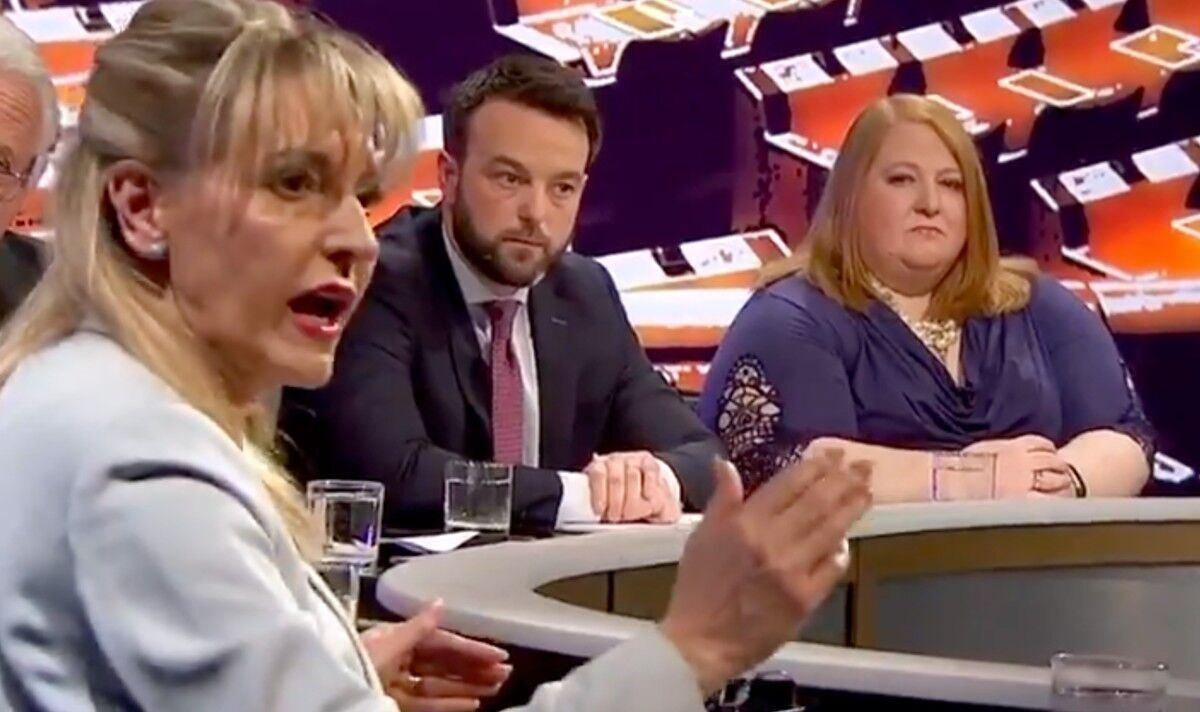 In the resurfaced BBC EU Election debate clip the then Sinn Fein MEP and convicted IRA bomber clashed with other Northern Irish politicians over the Brexit backstop which later transformed into the controversial Northern Ireland Protocol. Martina Anderson, who has since stepped down as an MEP, was slapped down after suggesting the backstop was needed to prevent “contaminating” produce from reaching the island of Ireland from Great Britain.

In the BBC Northern Ireland EU election night debate from 2019, Ms Anderson told the audience that the Brexit backstop is needed to prevent “contaminated produce” from Britain.

She said: “What [the backstop] presents is contaminated produce perhaps coming from Britain onto the island of Ireland.”

“Oh come on!” a fellow panellist can be heard yelling which sparks a round of applause from the crowd.

He told the audience: “This is someone who contaminated GB with bombs!”

Michelle O’Neill has warned that the British Government’s plan to enact legislation to scrap the Northern Ireland Protocol will have “colossal political and economic consequences”.

The Sinn Fein Stormont leader said that Boris Johnson’s plan to override parts of the protocol has “sounded alarm bells” across Europe and America.

Speaking at the annual Wolfe Tone commemoration in Bodenstown, Co Kildare, the first minister-designate told the crowd that it was an “irrefutable fact” that the protocol is working.

“Boris Johnson is incapable of accepting in a straightforward, honest, and truthful way that this is the case,” Ms O’Neill added.

“The attempts this week by Boris Johnson to sabotage the protocol in plain sight have sounded the alarm bells right across Ireland, Britain, Europe, and America, awakening all those who value the Good Friday Agreement and who care deeply about safeguarding our peace and progress of the past quarter-century.

“It is not taken lightly that this British Government discards international law at a whim in such a reckless way, and only ever in their own selfish interests.

“Boris Johnson knows that to gamble the protocol is to jeopardise the British Government’s agreement with the EU on their withdrawal and future trading relationship with colossal political and economic impact.

“The Tories have no mandate on this island.

“However, a majority of those MLAs recently elected do and there is a majority in the Assembly who support the protocol because it is working, giving us continued access to the European single market, creating jobs and economic benefit.”

Ms O’Neill called for all of Northern Ireland to re-enter the EU and said the Irish Government “must plan for constitutional change”.

“We need re-entry back into the EU for all of Ireland,” she added.