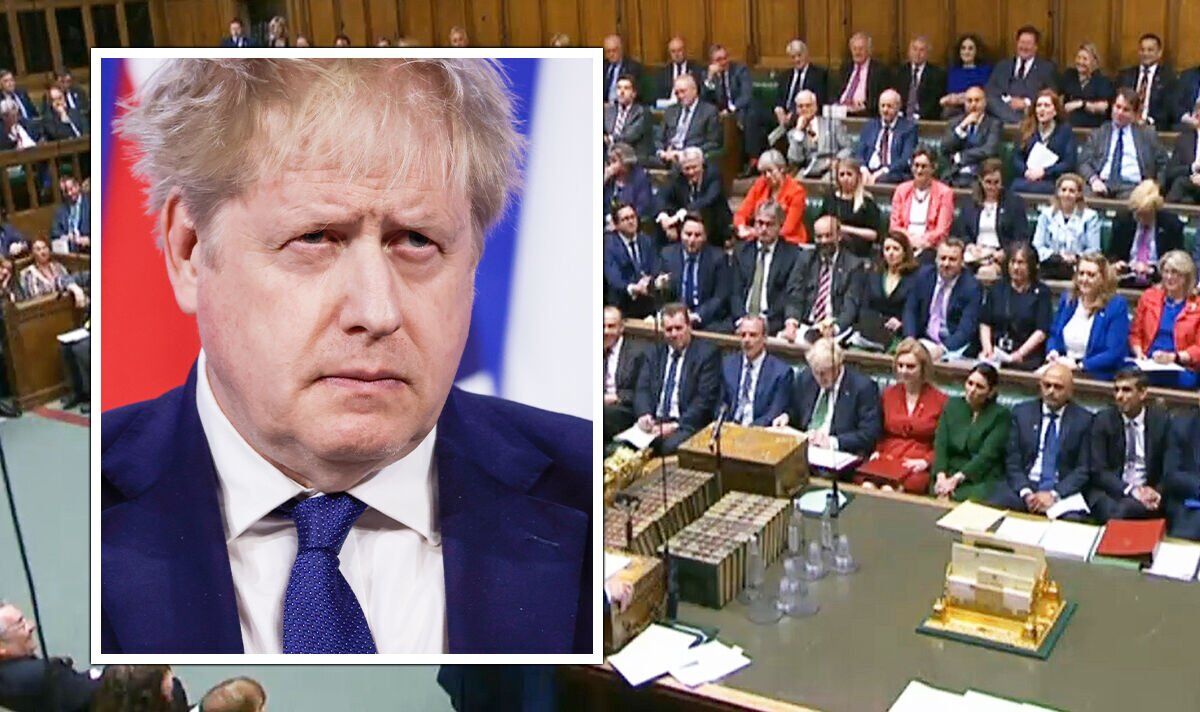 The Prime Minister escaped with just one Met Police fine from the Partygate allegations of drinking in Downing Street and the civil servant Sue Gray said in her report that there was a need “to move on”. But MPs voted last month that he should be investigated by the powerful Standards and Privileges Committee over whether he lied to Parliament.

If found guilty he would still have to resign according to the Ministerial Code.

After being stunned by 148 Tory MPs – 41 percent of the Parliamentary party – voting they have no confidence in him on Monday, the Prime Minister is under immense pressure.

Questions had been asked why the Standards Committee has been taking its time to begin the inquiry now that Ms Gray’s report has been published.

But a committee source told Express.co.uk: “It will begin in just a few weeks.

Have Your Say: Should Boris call snap election to end Tory rebellion?

“The committee has another inquiry which is complete but just needs wrapping up and then it will get straight to work.”

The source added: “Chris Bryant [the committee’s Labour chairman] says it can all be done before the summer recess.”

Summer recess starts on July 22 which means Mr Johnson could be just weeks away from learning his fate.

The source added: “That may be optimistic but there does not seem to be much to consider.”

However, Mr Bryant has lost control of the process because he has had to exclude himself from the inquiry because he had publicly claimed Mr Johnson had lied to Parliament before and therefore prejudiced his decision.

Instead, former Labour deputy leader Harriet Harman, the Mother of the House as the longest serving female MP, will chair the inquiry.

Tory plotters hope they will get another shot at ousting Mr Johnson from Downing Street if the parliament probe finds him guilty of lying and he does not quit of his own accord.

They believe it could create fresh momentum for a change to party rules to force a second no confidence vote against the Prime Minister.

At present, a vote can only be held every 12 months.

The Tory party has descended into disarray since Mr Johnson survived the confidence vote against him on Monday.

Tory ministers and MPs have broken rank to criticise policies being implemented by the Prime Minister.

Last night Business Secretary Kwasi Kwarteng told MPs he “continues to be opposed” to a windfall tax, just days after one was introduced by the Government on the energy sector.

Meanwhile, Health Secretary Sajid Javid made clear his frustration at the high tax burden imposed on Britons by Chancellor Rishi Sunak as he called on Downing Street to “do more on tax cuts”.

Mr Johnson has already signalled his desire to introduce reductions.

The Prime Minister insisted on Tuesday it remained a “fundamental Conservative instinct” to cut taxes, Mr Sunak used a speech to the Onward think tank last night to reaffirm his intention to reduce taxes for business in the autumn.

But some ministers and backbenchers are frustrated at the failure to act quicker.

“I would like to see cuts where they’re possible, Mr Javid said this morning.

The outspoken remarks from members of Mr Johnson’s top team come despite Cabinet colleagues being bound under the ministerial code to publicly back all Government policies or resign.

Backbenchers have also been unafraid to be vocal in making demands of their leader, listing what they want him to do to win back their trust.

Brexiteers are urging quicker action on standing up to the EU on the Northern Ireland Protocol, Thatcherites want Government spending to be cut, and MPs apart of the so-called “One Nation Tories” are eager for the Prime Minister to do more to help those struggling with the cost of living crisis.

The criticism from all quarters comes as Mr Johnson struggles to regain his grip on the party after surviving Monday’s bruising ballot.

The range of issues which have caused discontent in the Tory ranks means there is no single response the Prime Minister can make to win over doubters.

While both Mr Kwarteng and Mr Javid have publicly expressed frustrations over some Government policies, they gave the Prime Minister their full backing

Mr Kwarteng said he was “pretty confident” that there would be no change in leader before the next election.

Meanwhile, Mr Javid said “it was a clear and decisive win for the Prime Minister”, adding that even some MPs who didn’t back Mr Johnson are “democrats like all of us and they accept the result of the vote and they’re getting behind the Prime Minister”.