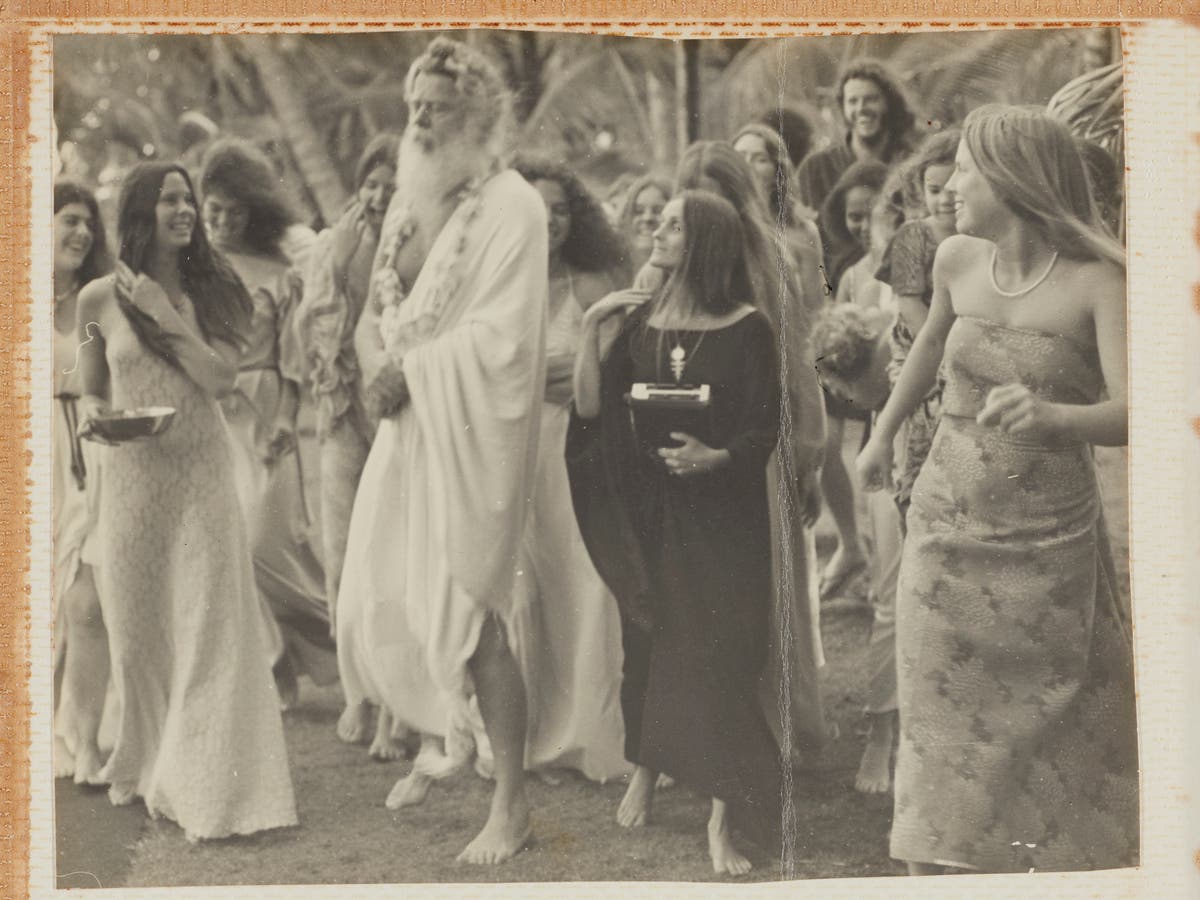 In 1969, pioneering health food restaurant The Source opened on the Sunset Strip in Los Angeles. It quickly became a Hollywood hot spot, attracting the likes of Steve McQueen, Goldie Hawn, Marlon Brando, Joni Mitchell and John Lennon to its famous patio. Woody Allen poked fun at the vegan menu in Annie Hall, ordering “alfalfa sprouts and a plate of mashed yeast”. But a dedication to clean living was hardly the most radical thing about The Source. What really attracted diners was the fact it was owned and run by a glamorous New Age cult known as The Source Family.

“We felt we were more famous than they were,” recalls Isis Aquarian, a Family member and their proud archivist. “They came to eat at The Source because it was the ‘in’ place to be. We were clean, positive, happy people and the whole thing put you in a different state of mind, a different frequency. When you stepped onto The Source patio, everybody felt it. It was a whole other world.”

The Source Family was led by a charismatic long-haired guru known as Father Yod. In a previous life he’d been Jim Baker, a wealthy former US marine who served in the Second World War before moving to Hollywood to become a stuntman. A martial arts expert, he had once killed a man in self-defence and subsequently registered his hands as lethal weapons. He left Jim Baker behind after becoming fascinated with esoteric spiritualism and soon made himself the patriarch of a commune of 150 young people who lived, worked and slept together in a mansion known as The Mother House in the Los Feliz neighbourhood of Los Angeles. They supported themselves with the profits generated by their restaurant, which at its early Seventies peak was bringing in $10,000 a day.

Isis Aquarian was one of Father Yod’s 14 wives, and from the moment she joined the Family in 1972 she set about creating and maintaining scrapbooks which recorded their activities along with Father Yod’s teachings. Now 80, she has teamed up with Brooklyn-based indie label Sacred Bones Records to launch a Kickstarter fundraiser campaign with the intention of publishing those exhaustive archives as The Source Family Scrapbook. “We were daring. We were beautiful. We were the darlings of LA,” she says. “Jim Baker, Father Yod, is larger than life to begin with. He was then and he still is apparently, so these scrapbooks will be very interesting to a lot of people.”

Aquarian herself first stepped onto The Source patio in search of Jesus, or rather a selection of Jesuses. Then still known as Charlene Peters, she was a former beauty queen and White House social aide who at the time was engaged to Ron Raffaelli, a rock’n’roll photographer famed for his pictures of Jimi Hendrix, Led Zeppelin and The Doors. When Raffaelli was commissioned to shoot an advertising campaign for the musical Jesus Christ Superstar,she headed to The Source restaurant to look for suitable models among their bearded hippy staff. She had known Jim Baker through his first wife, Dora, but says she barely recognised him when he appeared on the patio. “He came out looking like Moses,” she says. “He was no longer Jim. It was an instant, instant connection. I don’t want to get too foo-foo, but when we met I remembered making commitments to each other before incarnating [into our present lives]. I knew this was our time.”

Within two days Aquarian had left her old life behind and was living with the Family, helping them photograph and document their first natural home birth. “I turned on a dime,” she remembers. “I went back to the studio, got cameras and told Ron I was leaving. I actually asked him to come with me, but he wanted nothing to do with it. He thought, I’ll give her a couple of weeks and she’ll be back. That didn’t happen! I started archiving right away. It was too awesome not to, and nobody was doing it.”

According to Aquarian, life on the commune was idyllic. “The Mother House was amazing,” she says. “It was a beautiful three-storey mansion with a huge swimming pool, and here were 60 or 70 people running around nude or in flowing robes. It was like we were of another era, another age.” They believed that as a group they had lived many lives together, and spent their time revisiting past incarnations under Father Yod’s instruction. “We were getting metaphysical teachings and living a metaphysical life,” says Aquarian. “We went through periods of experiencing life as American Indians or Egyptians, and he allowed us to really delve into those incarnations. We got to reconnect with all of that. It just became normal.”

The commune had a house band, originally known as Father Yod and the Spirit of ’76 and later as Ya Ho Wha 13. They recorded more than 60 albums in 1973 and 1974, evolving from straight-forward folk-rock into what Father Yod called “spontaneous music”, a sort of improvised psychedelia. It was music for the dawning of a new age, and Aquarian still believes Father Yod’s teachings were ahead of his time. “He taught us there was a whole new world ahead of us, a reset for the betterment of humanity and the planet,” she says. “Well, that was 50 years ago! We thought it was going to happen then, but it’s basically happening now. The whole world really is one at this point because we were all brought down together with Covid. I think we’re finally reaching out for the betterment of each other. Kindness is not just a buzzword anymore. Back then, that’s what Father left us. He said, ‘Do what you want, just be kind’.”

For all of The Source Family’s radical ideas about free love, natural foods and communal living, many have pointed to Father Yod’s 14 wives and his control over the group as evidence that it reproduced elements of patriarchal society. Aquarian doesn’t see it that way. “We were the mothers of the family,” she argues. “We were the buffer between him and the rest of the family. He got to enjoy the family and they got to enjoy him and we took care of all the in-between. One of his main objectives was bringing back the matriarchy and respect for women.”

She also says she’s untroubled by people referring to the Source Family as a cult, despite the term’s many negative connotations. “I don’t really have an issue with it,” she says. “To me, a cult is just one’s culture, a way of life or belief. Charles Manson brought that term to wider attention because the press needed a buzzword when he came into the picture, and that ruined it for everybody.”

The Source Family left Hollywood the day after Christmas 1974, selling their restaurant and moving en masse to Hawaii. On 25 August 1975, Father Yod announced that he wanted to go hang-gliding, despite having never done so before. He leapt off a 1,300ft cliff on the eastern shore of Oahu, crash-landed on a beach and died nine hours later. The Source Family subsequently unravelled, but their legacy and music has been preserved by Aquarian’s work and by the acclaimed 2012 documentary The Source Family.

Filmmaker Jodi Wille, who co-directed the documentary and is helping Aquarian to get her scrapbooks published, believes the Family’s story is a courageous hero’s tale about how a community can be built around a shared intention. “It’s interesting to think about just how many hundreds of thousands of young people really went for it back in the Seventies,” she says. “They made the move and decided to actually live together and share their resources. They’re on the rise again and it’s fascinating to think about the benefits those groups can offer, the least of which is a sense of community in a very isolated time.”

Aquarian too believes The Source Family’s experiments in communal living have much to teach our increasingly fractured and atomised society. “Father Yod used to always say, ‘This is not the inclination to be a monk, or to go out in the woods by yourself’,” she says. “‘This is the incarnation that we all agreed upon, all of humanity, to come back together and make it work’.”

‘The Source Family Scrapbook’ is on Kickstarter