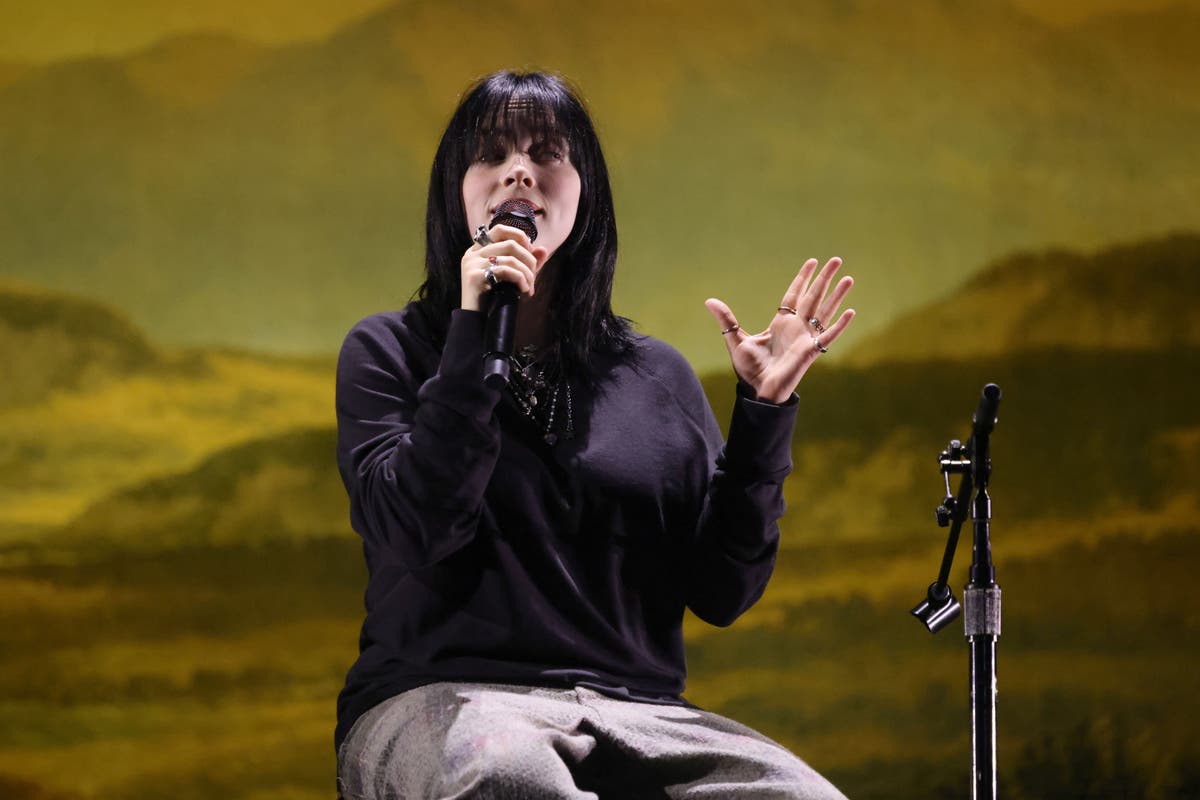 Billie Eilish is a restless performer. In her short but meteoric career, she’s been known to pinball around the stage while dressed in the sort of baggy outfit that facilitates free motion. She jumps. She bounces. She ducks. She kneels. A conductor of chaos, the 20-year-old sets the tone for whatever crowd she plays to. So it was worth wondering how the hyperkenetic pop phenom would approach an acoustic live show. The frenzied fans that fixate on her every move tonight prove that Eilish need only wiggle an eyebrow to elicit elation.

She returns to Europe in collaboration with Telekom Electronic Beats – and in uncharacteristically understated fashion. At the Telekom Forum in Bonn, with a capacity of just 2,000, the first night of her tour is an intimate affair. Or as intimate as you could ever hope from an artist who has sold millions of records, won big in every major Grammy category, and co-wrote an Oscar-winning James Bond theme song. The 2,000 strong crowd may as well be a private concert. As Eilish notes multiple times throughout the evening: “This is so cute!” Cute is right. There are no pyrotechnics. No visual projections. No cranes. Just Eilish and a stool with her brother-slash-collaborator Finneas by her side.

The hour-long set is mostly made up of songs from her latest album, Happier Than Ever, and those breathy ballads and fluttery croonings translate to acoustic renditions almost seamlessly. Eilish flits between those and the disarming quiet of her 2017 EP Don’t Smile At Me; the acoustic mode does tremendous things for her vocals. She has a husky, haunting voice capable of mutation. She is known for rarely raising its volume louder than a whisper, so the lack of background noise tonight, plus a reverentially hushed crowd, amplifies it to extraordinary effect. The breathy vocals of her breakout song “Ocean Eyes” are the clearest I’ve ever heard them. It is both a wonder and a shame then that “No Time To Die” is conspicuously absent from the set list.

Still, there are moments when you can’t help but miss the chaos. It’s a pang felt most acutely during “Bad Guy”. The 2019 trap-pop hit is emblematic of her past era: menacing and frisky. As the intro – an instantly recognisable 135 BPM heartbeat – kicks in, for one moment it seems Eilish may just boot the stool away and tear into the song in her typical no-holds-barred style. But alas, she does not. The acoustic rendition is fine, but no substitute for the real thing.

Chat is kept to a minimum but when she does interact, it’s textbook Eilish: candid and familiar. “It looks like my flies unzipped but it’s not, just thought you should know!” she announces. These are the moments that stick. When she jokes about her undone fly. When she makes eye contact with Finneas and they burst into inexplicable laughter. When she accepts a Ukrainian flag from a fan and wraps it around her shoulders. From the outset, Eilish has traded in intimacy; a small venue can naturally home in on that.

Eilish recently spoke about rejigging her tour schedule to protect her from exhaustion. Later this week, she’ll kick off the European stint of her world tour. Perhaps this acoustic gig is simply a way to ease her in, some stillness before the storm. If that’s true and she’s using tonight as a breather, we’re more than happy to oblige.