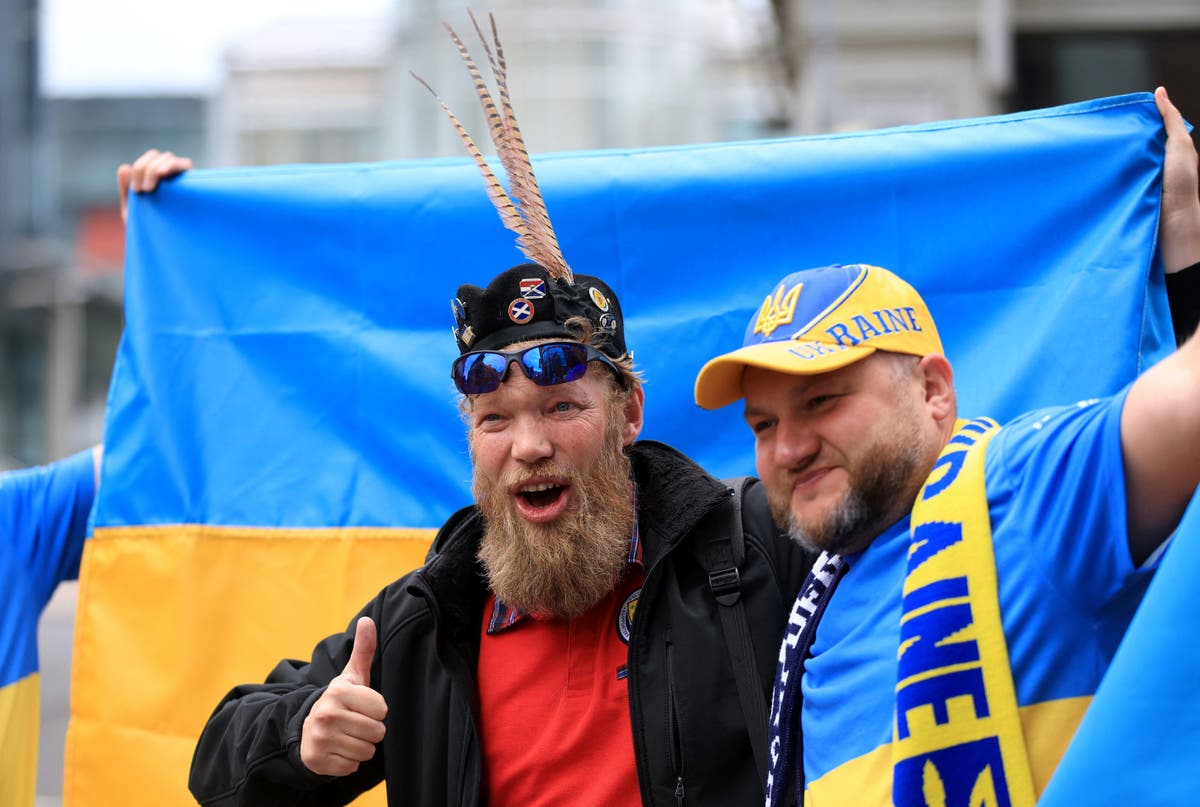 To compete against Ukraine in 2022 is a delicate thing. What is a worthy victory, and what is actually fair? The mammoth public vote for the Ukrainian Eurovision entry was one thing, but international football raises emotions (and tempers) to a whole other level.

Fortunately for the Scottish football side, who face a World Cup qualifier against the Ukrainians today, the atmosphere as fans head to Hampden Park is not of pity, but of joy.

And according to Artem, a young Ukrainian Edinburgher who’s lived here since long before the invasion, the game means a lot more than simply proving that Ukraine and Ukrainians are surviving.

“Being in Scotland, there’s not been a lot of opportunities to celebrate being Ukrainian without the backdrop of the war,” he explains. “For example, there’s quite a lot of events like demonstrations and protests and sort of gatherings with a lot of refugees attending these in a few different cities in Scotland, just wherever they settled.

“But these are difficult to attend not because of logistics, but because it’s mentally difficult to confront the reality of a lot of these people and to process everything that’s happening. So a game like this is a great opportunity to celebrate being Ukrainian and not necessarily forget about the war, but just be there because of this really joyful event that is about to happen.”

The war aside, this is still a football game, meaning joyful is as joyful does. There’s a great prize dangling in front of Scotland: if they defeat Ukraine, they only have to beat Wales on 5 June to get into their first World Cup since 1998, where they managed two losses and a draw.

As far as Scottish football goes, that’s as tantalising a prospect as it gets. The taste of international competition Scotland enjoyed in last year’s Euros was brief but thrilling, in particular the chance to play England. For all the cliches about mutual Scottish-English disdain, the Scotland fans who trekked to London for the intra-UK match were elated to hold their neighbours to a draw with few if any signs of nationalistic street-brawling. Should they get a rematch in Qatar in November, the mood could be even more jubilant.

But Scotland’s unlucky-at-best reputation in this particular field of human achievement inevitably precedes it, and not just at home. Back in December, before Russia began its brutal and unprovoked assault on its neighbour, it was the Ukrainian manager, Oleksandr Petrakov, who had to consider Scotland’s feelings after he was seen jumping for joy when finding out who his team had been drawn against.

“Yes, I was joyful when the draw was made,” he later said, “but that was a natural reaction because we weren’t drawn against Italy or Portugal. We weren’t seeded. We could have had a horrible draw, so of course I was happy that we got Scotland. We avoided the really big teams.

“That’s all. It wasn’t a slight on Scotland. I apologise if people thought I looked too happy!”

The world has changed since then, not least by opening its arms to Ukrainian refugees – though signups to the UK’s already muddled sponsorship scheme have slowed down, meaning that Ukrainians leaving the areas currently under fire are at a huge disadvantage compared to the first wave.

But the goodwill, for what it’s worth, remains, and sport will be the better for it. To Artem, some of whose family are now gathered together for the first time since the war kicked off, the game and its outcome transcend all the noise from before Russia started the war..

“For me, it’s celebrating both belonging to the Ukrainian community and the Scottish community,” he said the day before the match. “So if Scotland wins, it’s as good as if Ukraine wins. It’s not really about who’s winning. Because after all, sport is more a celebration of one of the things it means to be human.”

South Africa vs Argentina live stream: How to watch the Rugby Championship fixture online and on TV

Arsenal vs Tottenham live stream: How to watch the Women’s Super League fixture online and on TV