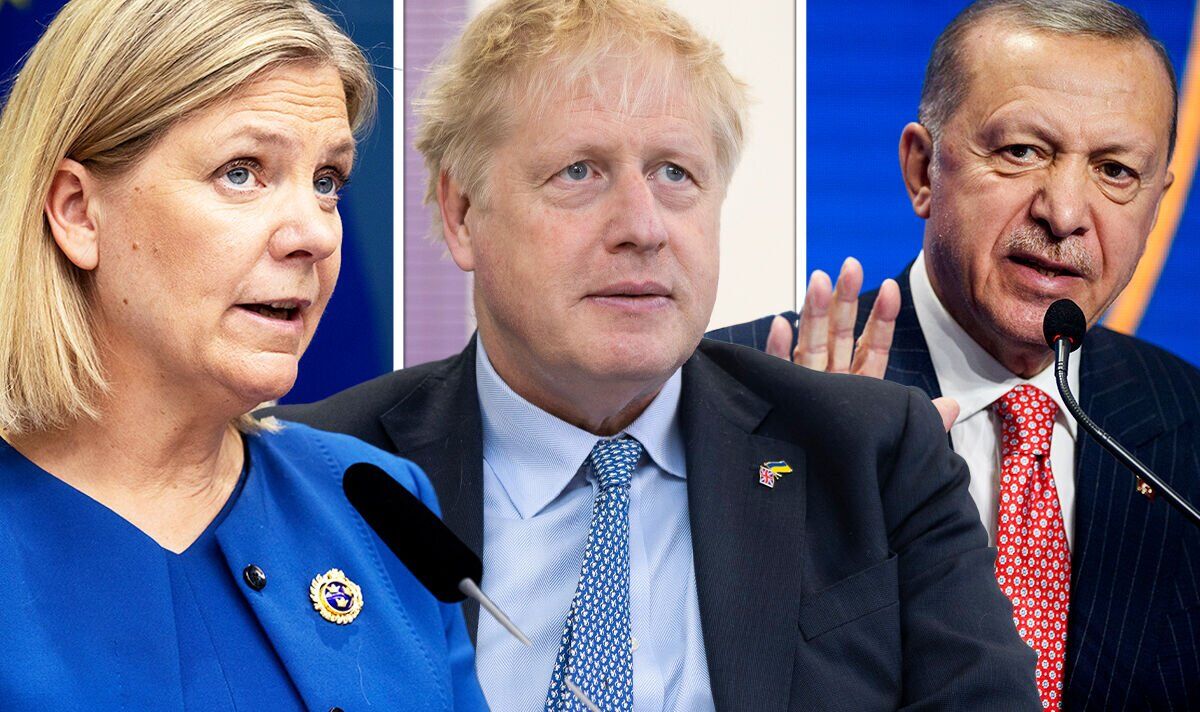 Express.co.uk revealed this weekend that a senior source from President Erdogan’s Turkish government had warned that the plans for expansion being pushed by Mr Johnson will “take a long time.”

Sweden has denied that it is providing anything other than humanitarian aid to the disputed territory in Syria on the Turkish border.

Britain has gone ahead and signed a pact with both Sweden and Finland to provide military aid if required but Nato rules mean a single member can veto another country joining the alliance.

And now a new issue has arisen in the wider Nato talks with Turkey considering using the diplomatic crisis as a means to press for a solution in Cyprus.

A source close to North Cyprus President Ersin Tatar has confirmed that he made a call to President Erdogan to ask that the status of the officially unrecognised Republic is put on the table in the Nato talks.

The source said: “I know the call was made and I understand that President Tatar received a positive answer.

“Why not use any leverage we can in this situation? Greece and Cyprus have been using their veto on the EU to stop any progress being made and it is time this injustice was resolved.”

President Tatar revealed in an interview with the Sunday Express that his aim is for North Cyprus to be recognised as a separate country.

He believes that attempts to bring the two back together since partition took place in 1974 is now futile.

It is understood that senior UK ministers are sympathetic to the idea as well as allowing direct flights to North Cyprus which is currently only served with routes from Istanbul.

Labour’s former Foreign Secretary Jack Straw has also backed the plan and accused Cyprus of reneging on a deal which would have resolved a crisis which started in 1974 when Turkey occupied the north of the island to protect Turkish Cypriots in the wake of a military coup in Cyprus and fighting between the Turkish and Greek communities.

As the former colonial power Britain is one of the three guarantors of peace on the island along with Greece and Turkey but a series of talks including at the UN in the last year have failed to resolve the issue.

Now the two states are arguing over oil reserves which have been found around the Mediterranean island.

Mr Straw believes that Cyprus should have been stopped from joining the EU in 2004 after its government did a last-minute U-turn and recommended people voted against a deal negotiated by former UN Secretary General Kofi Annan a few days before.

Since then, progress has virtually run to a standstill with Cyprus and Greece using their vetoes at the EU to prevent progress being made there.

However, because Britain has two military bases on Cyprus acting as listening posts, Britain has been reluctants to force a solution as well.

The Sovereign Base Areas of Akrotiri and Dhekelia are two military bases that were retained by the United Kingdom as part of its sovereign territory when the Republic of Cyprus gained independence in 1960.

The source close to President Tatar said: “This is a longstanding injustice and needs to be resolved.

“You cannot have a people and a country go unrecognised internationally for decades.”