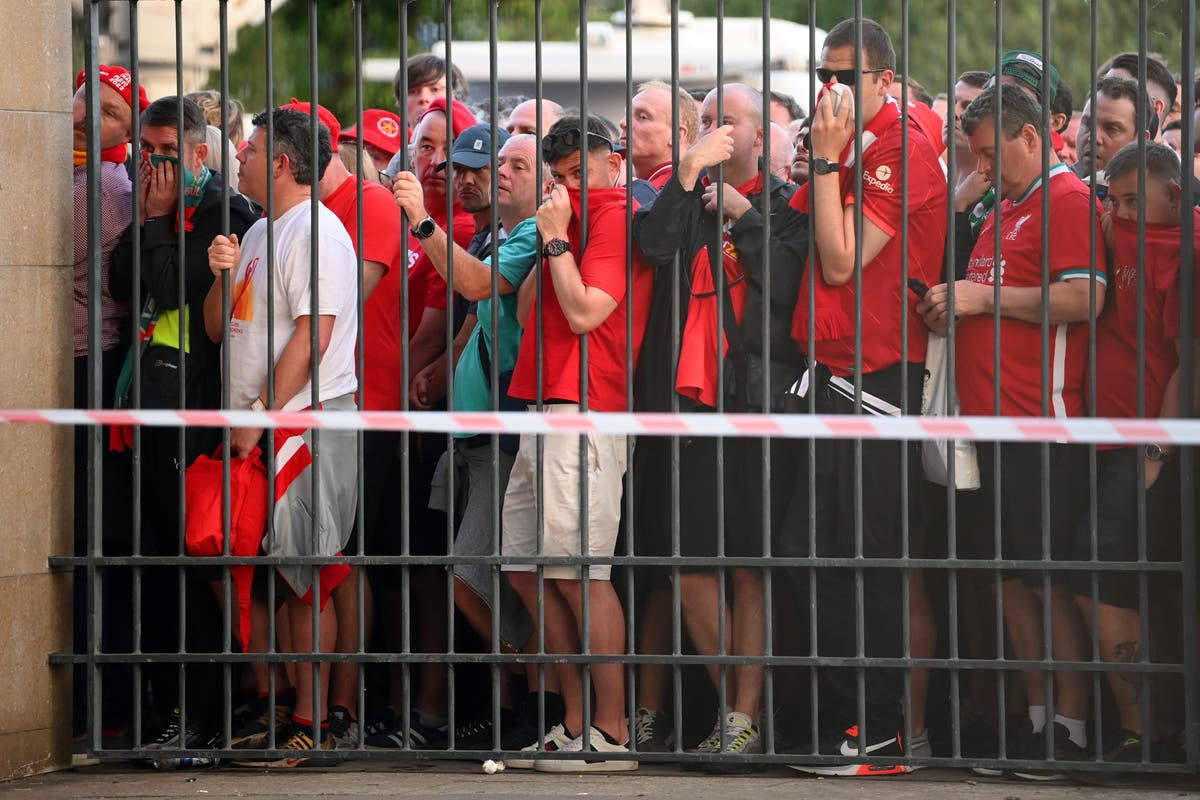 There was around three-quarters of an hour to go until kick-off at the Stade de France and, while the Real Madrid end was close to full capacity, the Liverpool end was still half empty. That was when it became clear to those of us already inside that reports of fans having difficulty getting into the ground were accurate and that the situation outside was becoming increasingly serious.

The problems started in the southwest corner of the Stade de France, under a bridge that runs over the top of a busy motorway. It is the main pedestrian route from the train station in Saint-Denis to the stadium, but police had parked vans at one section of it, creating a bottleneck which thousands of Liverpool supporters were expected to funnel through. This led to long queues and a potentially dangerous crush.

In that same corner of the ground but further up on an elevated level was Gate X, where shortly after coming out of the stadium, I saw gendarmes with batons and riot shields lining up along the turnstiles. This was in order to slowly filter the long queue of mostly Liverpool fans through and prevent anyone without tickets from entering. More and more of the fans who were admitted were walking in covering their face with their clothing due to the deployment of tear gas.

Every so often, someone would get in without presenting a ticket and be chased by stewards. Some were caught and led back to the gates, while others escaped up the long concrete staircases and made their way inside the stadium. Of those that I witnessed, all were young men and none were wearing colours or clothing that would identify them as either Liverpool or Real Madrid fans.

Legitimate ticket holders were at least being admitted at that gate, albeit slowly. Some of the more distressing scenes were further along at Gate Y, where a long queue of Liverpool fans were effectively locked out with no movement for long periods of time. Tear gas was used repeatedly in the vicinity of that gate, which even caused the stewards and security staff working there to disperse and cover their mouths.

Despite that, the fans in the queue were calm and behaving themselves in an increasingly tense atmosphere. Many were coughing and retching from the gas. Robbie Fowler, the former Liverpool striker, observed the scenes there even as the original kick-off time approached and spoke with fans who had already got through. Some supporters on the inside remonstrated with the stewards while others tried to pass messages to others still queuing up.

All those queuing outside Gate Y that I spoke to said they had arrived in plenty of time two or three hours before kick-off. There was anger that Uefa were citing the “late arrival” of supporters as the reason for the delayed start. Several blamed the bottleneck created by the police vans for the chaos and bemoaned the lack of communication from police, stewards and security. One woman, coughing into a tissue, said that the tear gas had irritated her asthma.

On at least one occasion behind this long queue of fans, groups of youths who were not wearing football colours were chased and pursued by police. Other journalists filmed police on the inside spraying tear gas directly at individuals on the other side of the fence. Security personnel attempted to stop my colleagues from documenting the use of tear gas, even threatening one of them with revoking his accreditation if he did not delete footage from his phone.

As the rescheduled 9.30pm kick-off time in Paris approached and plumes of coloured smoke from Camila Cabello’s opening ceremony passed overhead, fans in the queue were eager to know whether the game was about to start without them. It was and, though at that point myself and other journalists there to report on the game returned inside, many of the Liverpool supporters at Gate Y remained in line and waited to get in. Others, understandably, gave up and left.

Having initially suggested that the crowd issues were a result of fans not arriving on time, Uefa later released a statement blaming thousands of “fake tickets” for the disruption. “This created a build-up of fans trying to get in,” it read. “As numbers outside the stadium continued to build up after kick off, the police dispersed them with tear gas and forced them away from the stadium.”

Andy Robertson, the Liverpool left back, later claimed that a friend of his had been turned away for having a supposedly counterfeit ticket, only it had been sourced through the club by Robertson himself. Jurgen Klopp said that the families of Liverpool’s players and staff had experienced “real struggles” to get into the stadium, though wished to wait for more information before commenting further.

The club themselves have requested a formal investigation into what went wrong on a night that was supposed to be the showpiece event in the European football calendar. Instead, after observing what was happening outside the Stade de France before kick-off and having spoken to those caught up in it, it only seemed like an abject failure in organisation and policing.