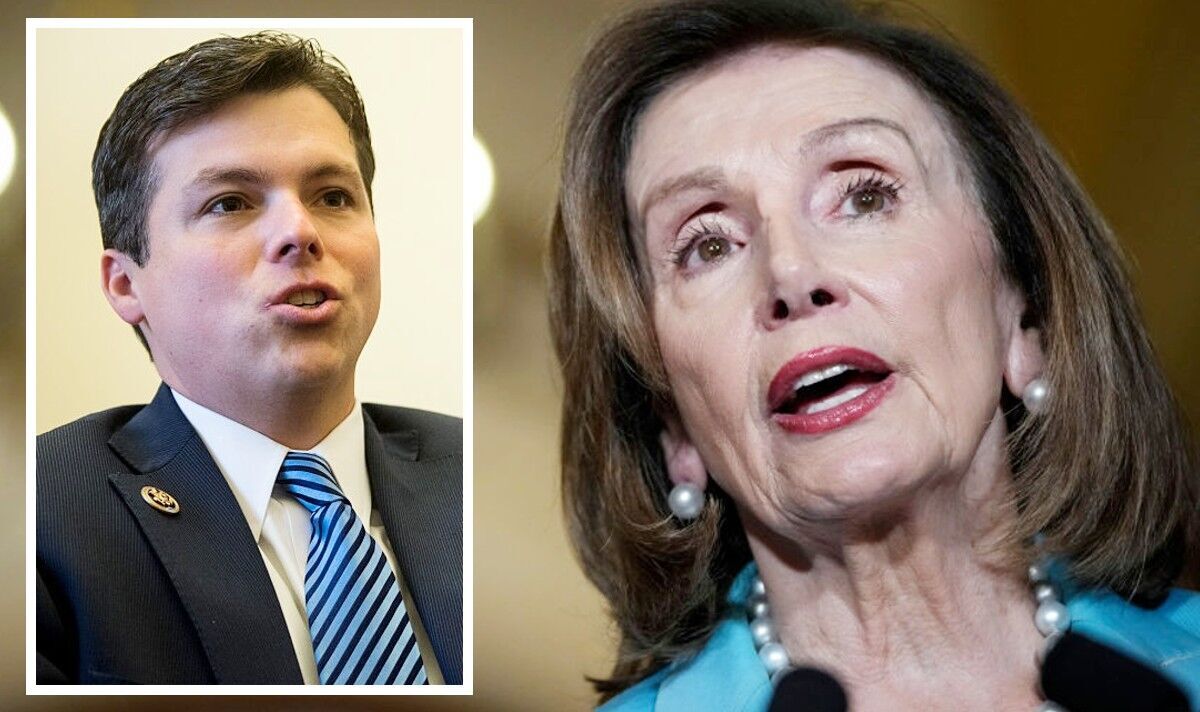 The news comes as the speaker herself commented on the Northern Ireland Protocol, and how the Good Friday Agreement is the “bedrock of peace” on the island. Ms Pelosi went as far as reiterating former threats by US President Joe Biden that should the situation remain the status quo, trade deals between the US and Britain would suffer as a result.

With the US continuing to demonstrate an invested interest in Northern Ireland, another senior US official has waded into the debate.

Brendan Boyle, a Congressman from Philadelphia, and close ally of Ms Pelosi said in an open and frank warning to the UK: “We call upon the UK to implement fully the NI Protocol, which avoids a hard border on the island of Ireland, preserves the integrity of the EU Internal Market, and protects the Good Friday Agreement in all its parts.

“We agree that renegotiating the Protocol is not an option.”

The tone of the Tweet, suggesting Britain does not have an option in how it conducts its internal affairs saw a former aide to Margaret Thatcher hit back at the Congressman.

Fuming at the threat, Nile Gardner said: “Mind your own business.

“A good idea to stop parroting the false propaganda of the European Commission as well.

“Show some respect as a Member of the United States Congress for America’s closest friend and ally the United Kingdom, and the democratic will of the British people.

The furious Tweet caused a string of reactions on the feed, with both sides of the argument having their say.

“Why should he show us any respect for telling the truth, if we put the GFA in danger we are not going to be allied with America for long.

“You need to start understanding how the world works.”

To which Antoine de Vry said: “If one does not understand that the EU is a repressive organisation, building a tower of Babel of which propaganda is an important tool, one has not really taken notice of what is going on.”

Dr Bea Gare reminded Mr Gardiner of the role the US held during the original Good Friday Agreement negotiations.

She said: “Mind your own business?

“The US is literally a co-guarantor, along with the EU, of the GFA.

“It couldn’t be more their business!”

Slamming the original message, and backing up Mr Gardiner, one Twitter user named Exotic said: “Don’t mind him, he’s a democrat, aka a clown.

“They’re not that wise.”

Others took the opportunity to remind the US of how such a Protocol could affect them.

Lindsey said: “If the EU want to put up a border, that’s up to them.

“Would you accept a hard border in Alaska or Hawaii or Porto Rico when you have to check all goods going to those states?

“Where people and produce couldn’t move freely to them?

Mark Harris also informed the Congressman: “You missed out on the part where the protocol agreed on the importance of maintaining the integral place of Northern Ireland in the United Kingdom’s internal market?”

Is the United States right when it comes to intervening over the Northern Ireland Protocol as a signatory member of the Good Friday Agreement? Let us know what you think by CLICKING HERE and joining the debate in our comments section below – Every Voice Matters!

In Northern Ireland, recent elections saw Sinn Fein surge to victory, and displace the DUP as the largest party in the north.

As part of the Good Friday Agreement, the two largest parties are expected to enter a power-sharing agreement in Stormont.

The DUP has so far refused to enter any such accord until the Protocol has been scrapped, and Northern Ireland receives assurances the enclave will remain part of the United Kingdom’s internal trade sphere.

Sinn Fein remains in favour of the Protocol and is seeking to conduct a referendum into a united Ireland, essentially paving the way for the break-up of the United Kingdom.