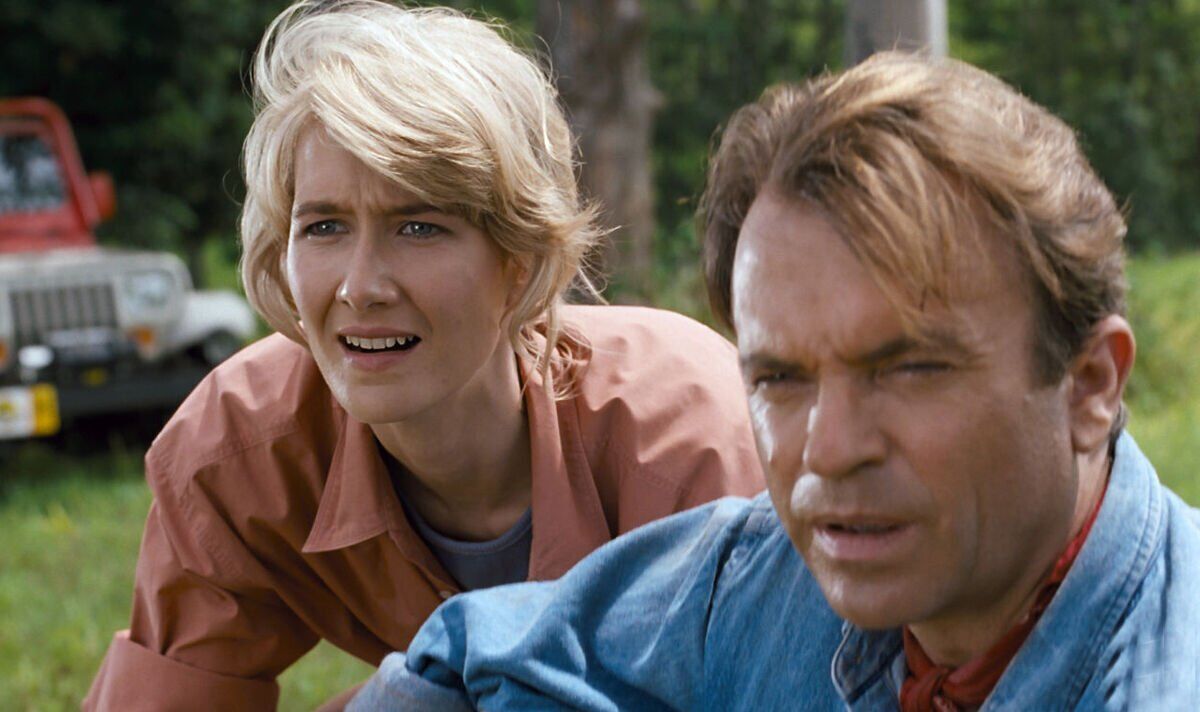 Next month Jurassic World Dominion will hit the big screen and continue the journey of Owen Grady and the escaped dinosaurs on mainland America. But the most exciting part of the upcoming movie is the return of the original three characters from the first Jurassic Park trilogy.

Laura Dern, Sam Neill and Jeff Goldblum are all reprising their roles in the upcoming movie – but Dern now has some thoughts about her character 20 years on from the original movie.

In Steven Spielberg’s original Jurassic Park Dern played Dr Ellie Sattler, a palaeontologist who worked closely with Dr Alan Grant (Neill). The two characters were romantically involved, and in the third film in the series – Jurassic Park 3 – they also have a child together.

Dern, who was just 23-years-old at the time of filming Jurassic Park, was in an on-screen relationship with the 44-year-old Neill.

“It was only now,” she continued. “When we returned in a moment of cultural awareness about the patriarchy, that I was, like: ‘Wow! We’re not the same age?'” (Via Sunday Times)

Neill has also now noticed the staggering age difference of 21 years. He noted how Dern was at a “tender age” when they shot the Oscar-winning movie.

However, Neill did note that, at the time, it didn’t seem like a problem.

He said: “I am 20 years older than Laura! Which at the time was a completely appropriate age difference for a leading man and lady.”

The actor also remembered the moment it all became apparent to him that something was off with the dynamic between the two characters. The 74-year-old said: “It never occurred to me until I opened a magazine and there was an article called ‘Old geezers and gals’. People like Harrison Ford and Sean Connery acting with much younger people.”

Neill was left in disbelief that he was involved in this article. He added: “And there I was, on the list. I thought: ‘Come on. It can’t be true.'”

Although the two characters are particularly problematic today, it seems as if the Jurassic Park and Jurassic World franchises have learned from their mistakes.

The new pair of protagonists, Owen Grady and Claire Dearing, are played by Chris Pratt and Bryce Dallas Howard respectively.

Pratt is 42-years-old at the moment, while Howard is 41, meaning there is a much smaller age gap between them. But perhaps the oldest member of the series, the iconic T-Rex, may be getting killed off in the upcoming movie.

Jurassic World’s director Colin Trevorrow recently discussed the fate of the incredible beast. He said: “We all have a real love for [Rexy] as if she’s a true character. So it was important for me throughout the course of these movies to take her on a journey and hopefully really make the audience want her to find peace. We want her to find a home. She feels like she has been constantly displaced, time and time again. For her to find a family and sense of belonging is what I want.”

James Bond: Daniel Craig got sage advice from Pierce Brosnan that changed his 007