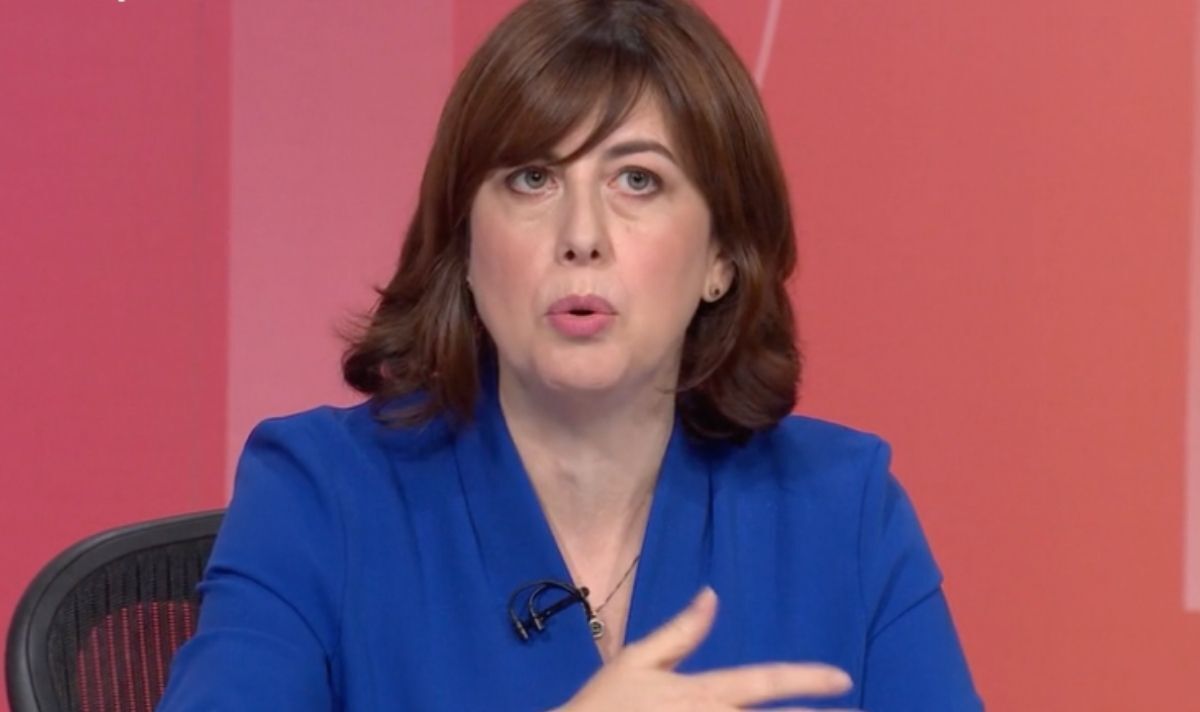 Shadow Culture Secretary Lucy Powell opened fire against the Brexit Opportunities Minister as the Manchester Central MP was joined by other BBC Question Time panellists in Liverpool.  Ms Powell said: “I think there’s definitely advantages and disadvantages, but I think the modern kind of working settlement… is around flexibility and people being able to make those choices themselves.

“The digital revolution was catalysed during Covid, we all downloaded the NHS app, we all got on apps and had to show QR codes and all sorts of things that we’d never come across before.

“The digital revolution is here, and it is coming, and it is also key, if we can harness it properly it is key to dealing with some of the productivity issues we have in this country, which are poor.

“I think, for someone like Jacob Rees-Mogg, who does feel like a terrible head boy prefect at some awful public school, he’s like the opposite of modern Britain, going around and sticking Post-it notes on people’s desks, it’s the absolute antithesis of modern working practices … as well as dealing with some of the challenges that digital working in different ways of working can bring benefits to our wellbeing and our happiness if we get it right.”

Her comments echoed those made by Sir Keir Starmer at Prime Minister’s Questions on Wednesday.

“On the other side, we have the right hon. Member for Northeast Somerset (Mr Rees-Mogg), who, when he is not sticking notes on people’s desks like some overgrown prefect, is dead set against it.

Emily Carver, head of media at the Institute of Economic Affairs: “I think that for me personally, I think humans are social beings.

READ MORE: Have Your Say: Should Charles apologise to Canada? ‘It’s not enough’

“I do think we benefit from being together in the workplace.

“I mean, some people I know hate being at the office and they prefer if they’ve got a family, then there are benefits to having that sort of hybrid working, being able to give more time to your family by not having to commute in.”

Ms Carver, who works in Westminster, also said it was “interesting” seeing the Government trying to get civil servants back to the office after calling Westminster an “absolute dead zone” during Covid where “there was no-one there really for months and months and months.”

She added: “Now it appears that people are coming back…so it seems like Jacob Rees-Mogg’s passive-aggressive note may have worked.”

Audience members, who spent the evening grilling the panel in Liverpool, expressed their own experiences and feelings about working from home.

Many even mentioned the mental health issues that come with it, from not going outside and socialising, and others noted how the flexibility helps many who need childcare or more time for themselves.

He added: “I work from home for three days out of five.

“The saving on the commute is great but I would much rather be out the house every day and I think it would be better for everyone.”