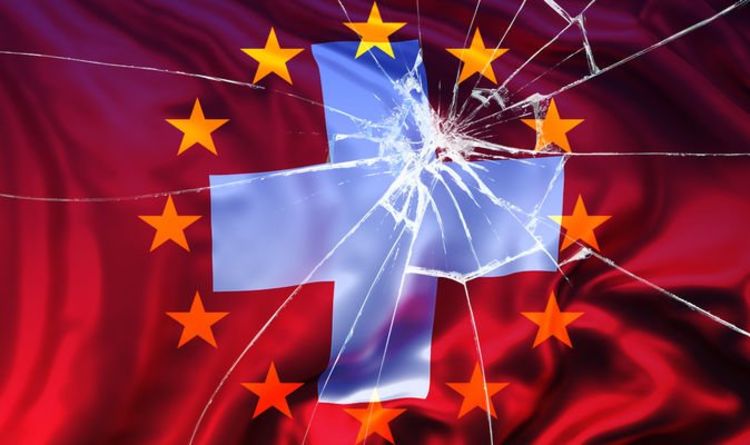 The right-wing Swiss People’s Party has urged voters to support “yes” in order to reclaim sovereignty back from Brussels. On Sunday the country will decide whether to limit EU immigration in a ballot that could deal a huge blow to relations with the bloc. SVP politician Vincent Schiller said: “We must retrieve the portion of sovereignty involving controlling immigration.”

The so-called initiative, put to a vote as part of Switzerland’s direct democracy system, calls for the country to amend its constitution to ensure it can autonomously handle its immigration policy.

While not an EU member, the country is tied to the bloc through a series of bilateral accords.

If the SVP initiative passes, authorities would have one year to negotiate an end to an 1999 agreement with Brussels on the free movement of people between Switzerland and the bloc.

But ahead of the weekend, the party’s campaign has seen support tumble in recent polls.

Recent studies suggest around 65 percent of Swiss voters are opposed to the SVP initiative.

Experts claim anxieties over immigration has eased since a 2014 initiative to impose quotas on migration from EU countries narrowly passed.

The vote wreaked havoc to the Swiss-EU relationship, with Brussels warning any curbs on immigration from the bloc would put their trading arrangements at risk.

Bern eventually stuck a deal in 2016 that added a few bureaucratic hoops for Swiss firms to jump from when hiring from the bloc.

The SVP condemned the compromise as a “betrayal” before launching their latest effort to end free movement with the EU.

The country’s political leaders have also warned if Switzerland voids its free movement accord, a “guillotine” clause will automatically freeze the entire package of Swiss-EU deals, including on trade.

Swiss voters will also vote on other issues, including whether to spend £5.1 billion on new fighter jets or allowing new fathers to take two weeks paternity leave.

In 2019, Swiss voters backed a move to tighten the county’s gun laws to comply with strict EU regulations after Brussels threatened to axe its Schengen zone membership.