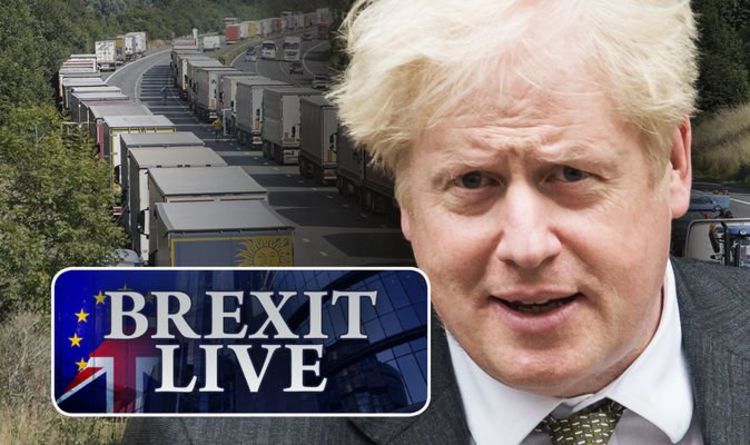 A political commentator has said the Government’s latest Brexit move could well be part of a wider plan, which is bound to anger Leave voters. Steve Hawkes, Director of Issues and Public Affairs at Burson Cohn & Wolfe, said discussions of a Kent border could be part of a wider plan to force the EU into signing a deal.

He wrote on Twitter: “I can’t help thinking the Internal Markets Bill, talk of a ‘border’ in Kent is all cover for the very Theresa May-like Brexit deal Boris will sign, say, at the end of October.”

Mr Johnson has given the EU a deadline of October 15 to agree on a post-Brexit trade deal, but the two sides are still at a stalemate over a number of key issues.

Tensions with the bloc also worsened following the Prime Ministers’ plan to override parts of the Withdrawal Agreement if a deal is not reached in time, as outlined in the Internal Markets Bill.

Yesterday Michael Gove, the minister responsible for no deal planning, has said truck drivers will need a permit to enter Kent after the Brexit transition period ends on December 31.

He said the permits could help avoid queues of up to 7,000 trucks seeking to cross the English Channel after the UK leaves the single market and customs union at the end of the year.

The minister suggested the Kent Access Permit (KAP) system would be enforced by police and ANPR cameras.

Drivers will need to apply for the permits online and show they have all the paperwork they need to ferry goods to Europe.

The European Union has struggled to understand it has a “completely unrealistic position” in post-Brexit trade talks amid Boris Johnson’s refusal to “cave in” to its demands, according to a trade law expert

Boris Johnson has taken a different approach to UK-EU talks from the previous Government according to Shanker Singham.

The CEO of trade law and economic policy consultancy, Competere, said that the UK will not cave into the EU’s demands and that the Prime Minister has successfully got that across to Michel Barnier.

Speaking to Westminster’s Future Relationship with the European Union Committee, Mr Singham said: “I think what was going on in the sort of June/July period was the EU were essentially negotiating with the UK Government as it was prior to the new administration.

“The history of the negotiation was that if the EU remained firm with its very strong opening bid and did not deviate off its opening bid then the history was that the UK would cave in.

“So, from a negotiating standpoint, I think the EU has just assumed that would continue, hence we have this issue where the EU has put forward this position.

“I would describe it as a completely unrealistic position, that another country would adopt your rule of law, your own legal order.

“They are doing that because they think the UK will ultimately cave in and simply accept the EU’s demands.

“I think what the UK had to get across, and it has succeeded, is that it is not going to cave in like it had done in the past.

“That is quite hard for the EU to understand: that there is quite a different approach now.”

9.22am update: Lorry permit plan branded ‘pointless and counterproductive’ by an industry body

Mr Buchanan said he was involved in a recent test of the permit system which indicated that Kent Access Permits will be issued to all lorry drivers who claim their paperwork is in order, without any checks carried out.

He told the PA news agency: “It’s an honesty box system. It’s not an effective system to actually guarantee or ensure that someone is ready to cross the border.

“It doesn’t do that. It is just a logging system for someone to say ‘I am going to the port and I promise I’m ready’.

“It doesn’t really do much more than that.”

He added: “It’s not asking for reference numbers or anything like that. It is super basic. Thankfully the bureaucracy involved is negligible, but the function is also negligible.

“The entire system is pointless and probably counterproductive.”

8.41am update: Government urged to ramp up engagement with business as Brexit nears

The Government is being urged to urgently ramp up engagement with business amid a series of “unanswered questions” over Brexit.

With fewer than 100 days until the end of the Brexit transition period, the British Chambers of Commerce (BCC) said there were 26 key questions that remain to be answered.

The business group said its research suggested that preparation for the coming changes was low because of the “unprecedented challenges” facing companies.

Fewer than two in five have done a Brexit risk assessment this year, compared to 57% in 2019, said the BCC.

Ashford MP Damian Green has welcomed proposals for the Kent Access Permit (KAP) for lorries heading to the Port of Dover.

He said: “Occasionally there are problems across the Channel and it is possible, I’ll put it politely, this could happen again on January 1 when the transition period ends.

“What we have done in the past is get as many lorries as possible as close to Dover and the Channel Tunnel as possible and then stop them there so you have to close the motorways and you get chaos on Kent’s roads.

“If you can say to these lorries there are problems, or in this case you don’t have the right paperwork so you are going to cause problems at the border, it is much more sensible to sort them out before thousands of lorries descend on Kent.

“So actually spreading the problem around the country means it is not a problem for everyone.”