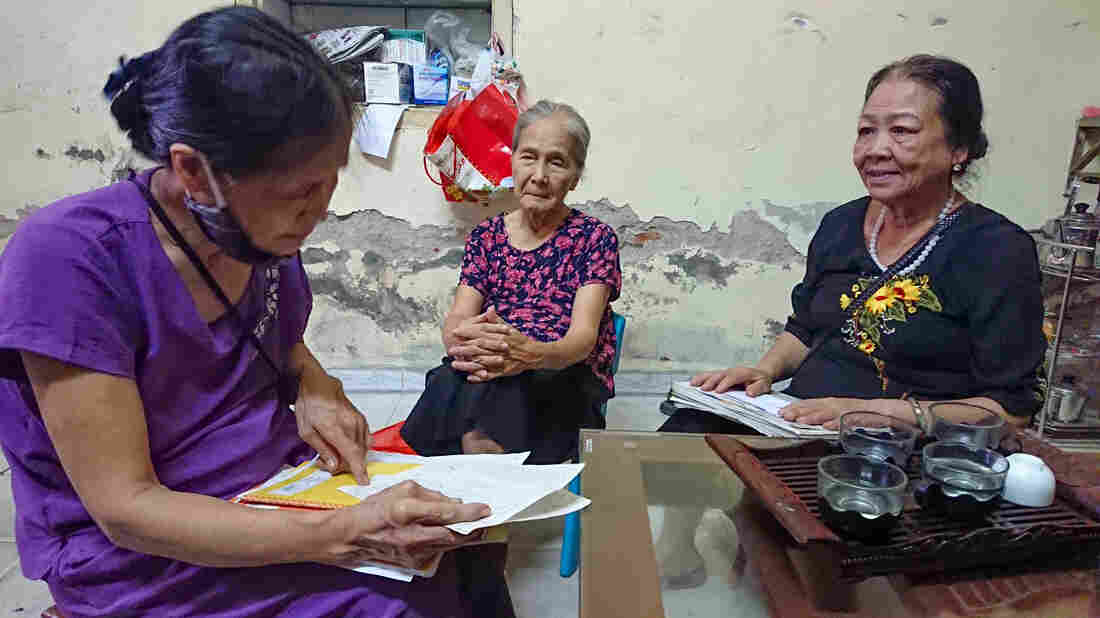 Dao Thi Hoa, right, chairwoman of the Intergenerational Self Help Club in the Khuong Din ward of Hanoi in Vietnam, checks the club’s account book with other members. Nguyễn Văn Hốt hide caption 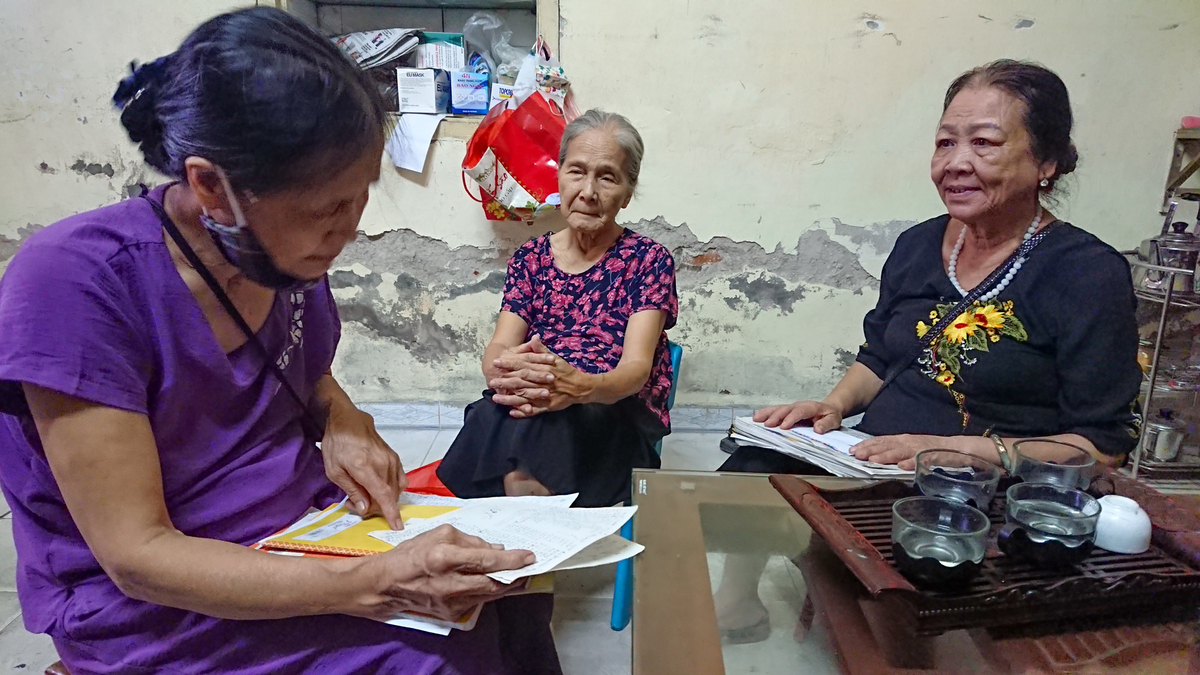 Dao Thi Hoa, right, chairwoman of the Intergenerational Self Help Club in the Khuong Din ward of Hanoi in Vietnam, checks the club’s account book with other members.

But one thing is easy to say. If you’re older — like above the age of 60 — and need help, the club will help you get it. That could mean a microloan if times are tough, a drum lesson as a chance for self-expression and social activity (and to prove that old people can play drums, too). And during the pandemic, the clubs have played a critical role informing and supporting its members.

The goal is to help older people and people with disabilities — and people in any age group can volunteer. That’s why “intergenerational” is part of the name.

But the idea is for club members to find solutions to their own problems. It’s a model that’s earned the club the grand prize for the Healthy Aging Prize for Asian Innovation in July. Organized by the Japan Center for International Exchange and the Economic Research Institute for ASEAN and East Asia, the award recognizes best practices in addressing challenges of rapidly aging societies in Asia.

Even though Vietnam has been relatively fortunate during the pandemic — with only about 1,000 cases — the virus has still been a focus for the club members.

In 2006, the group helped launch the pilot program for the clubs in Vietnam. Then in 2016, the government took it over, rolling it into the country’s national strategy to help older people, and providing some funding.

One of the biggest concerns for older people in the country, says Chu Viet Nga, program manager of Help Age International, Vietnam, is income — reflected in surveys of club members during the pandemic.

One problem is that fewer than a third of Vietnam’s over-60 population has a pension or government social assistance. Vietnam’s government is providing cash aid to families during the coronavirus crisis, but many older people are not eligible because they are not in the social security system — and the process to join is quite complicated, says Chu.

Nguyen Huong Hai, 68, for example, is a member of the Self Help Club in the Khuong Din ward of Hanoi. In April, he and his wife were worried about their financial situation. They didn’t have a pension and — like many Vietnamese families — relied on their adult children to send money on a regular basis. Unfortunately, their son, who lived in Australia, had to stop working because of the pandemic. And their daughter’s business, a fast food shop next to a school in Hanoi, had to close.

Nguyen was stressed. How would he and his wife survive the next few months?

Dao Thi Hoa, 69, chairwoman of the Khuong Din Self Help Club, caught wind of his story and sprang into action. She and a group of volunteers rallied the 60 club members to collect donations — over 1,000 pounds of rice, 85 cartons of noodles and cash, which they divided among 30 of the neediest group members, including Nguyan, who got 22 pounds of rice and about $50 — enough to help in the short term. 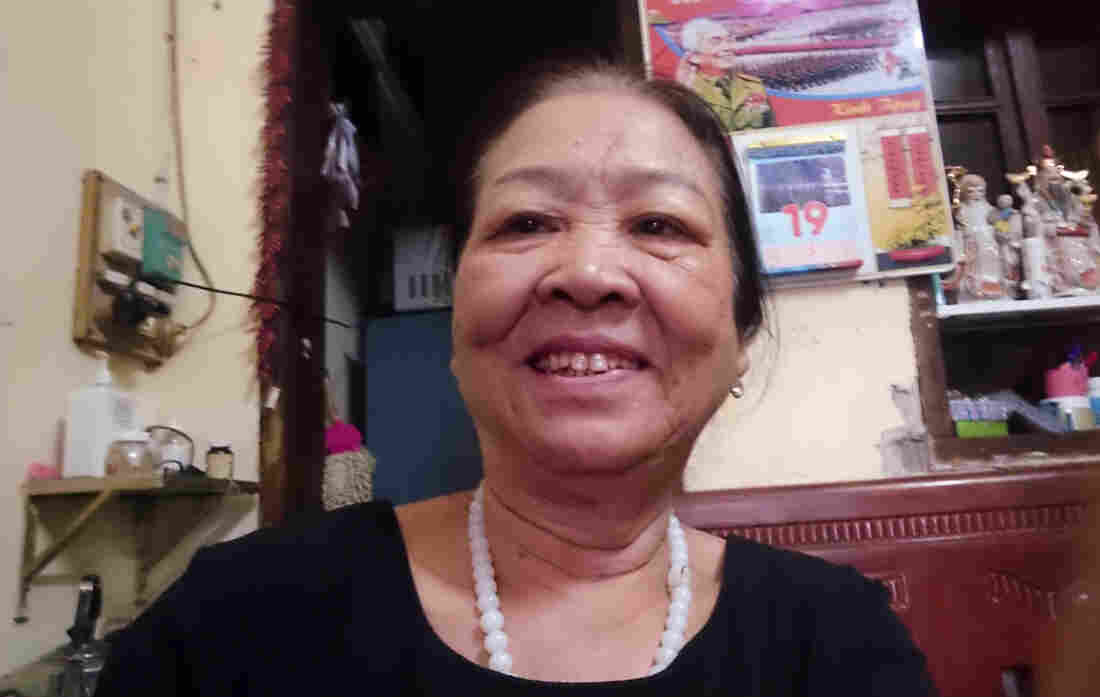 Dao Thi Hoa, 69, takes a selfie. Since she retired, she’s been volunteering as the head of the Intergenerational Self Help Club in the Khuong Din ward of Hanoi. Dao Thi Hoa hide caption

“This is the Vietnamese spirit,” she says. “We help each other and help the poor and anyone who needs it.”

It’s one of Dao’s proudest moments as a volunteer. That the group came up with their own solution for a club member’s problem made her realize something important: “Older people are not helpless. They can be strong and they can have a great impact in their own lives.”

Even before the pandemic, the club was providing a small financial safety net for members — the microloans and also courses on how to start a side hustle for fun or for additional income.. 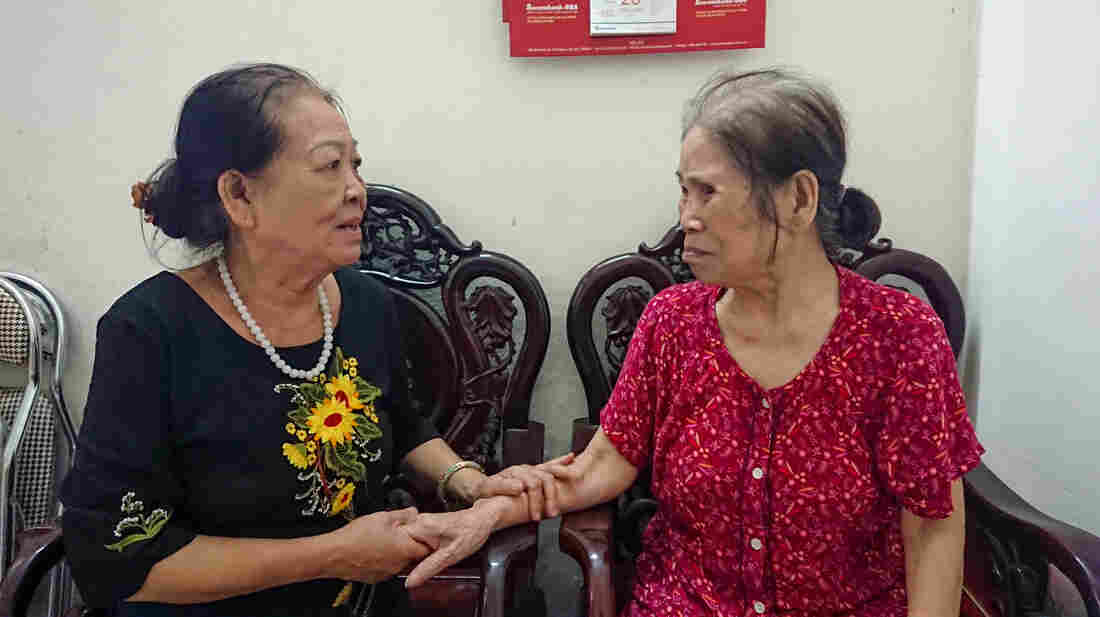 Dao, left, sits with club member Ms. Báu, who is seeking financial assistance from the club. Some funds are available to members in need. Nguyễn Văn Hốt hide caption

In multi-day workshops complete with PowerPoint presentations, volunteer experts (some of them members) teach how to pickle mangoes, grow mushrooms using a plastic laundry basket, grow bean sprouts in a bucket or raise backyard chickens.

“One person in my club grew one ton of beans,” over the course of many months, says Dao. They now sell them in paper bags at the market. 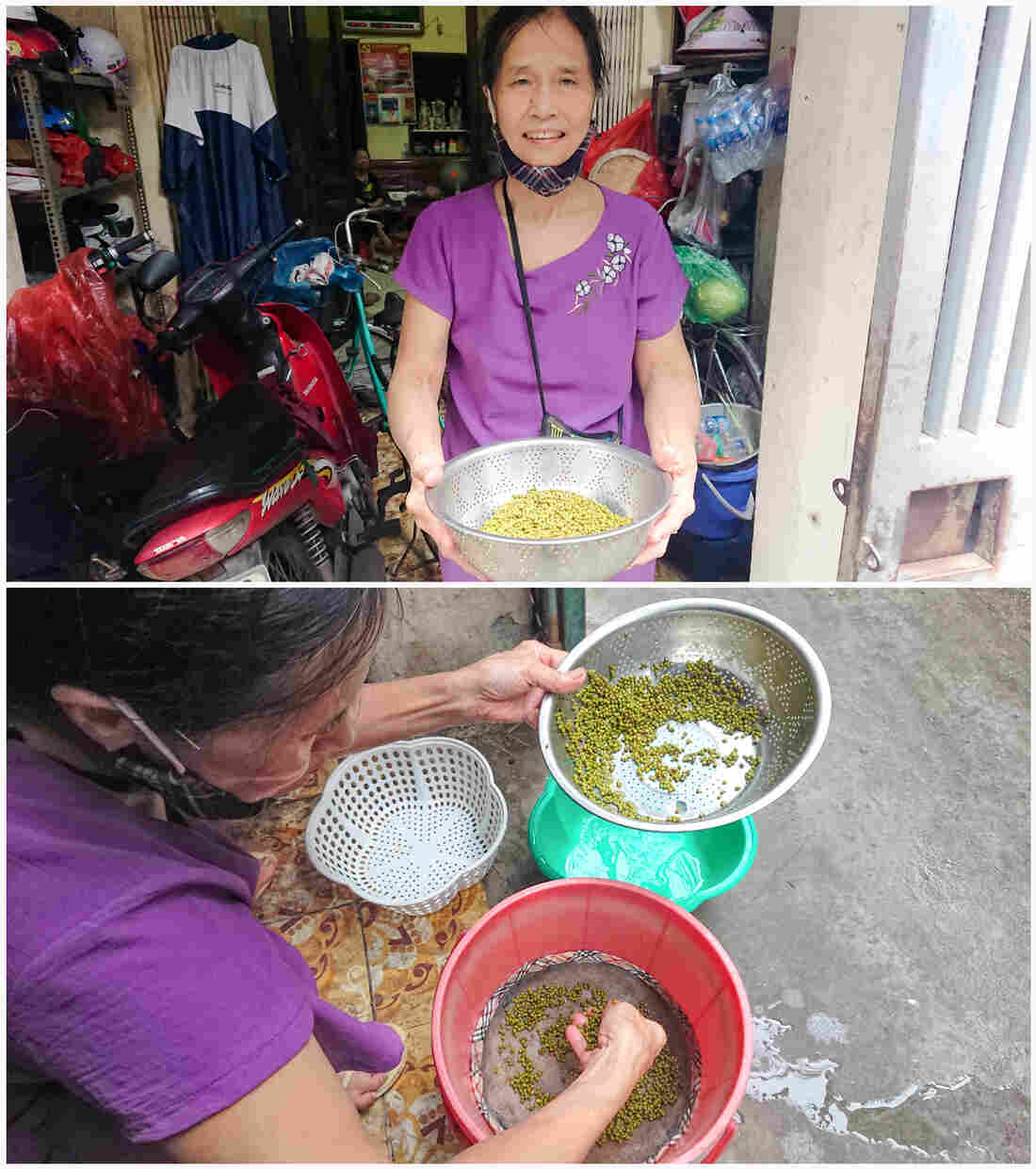 Ms. Hồi, a club member, learned how to grow bean sprouts in a bucket from the Intergenerational Self Help Club. Now she sells it to the local community to make a little extra income. Dao Thi Hoa hide caption

In addition to training members, there’s plenty of opportunity for socializing with everything from exercise classes to drum lessons — ways to fight the isolation that can come with aging, says Chu.

“Many people tell the older club members, why do you play drums? You are so old. Why are you dancing? You are so old. It’s not suitable for you,” says Dao. But, she adds, the members say, “Whatever! We can do whatever we like.” 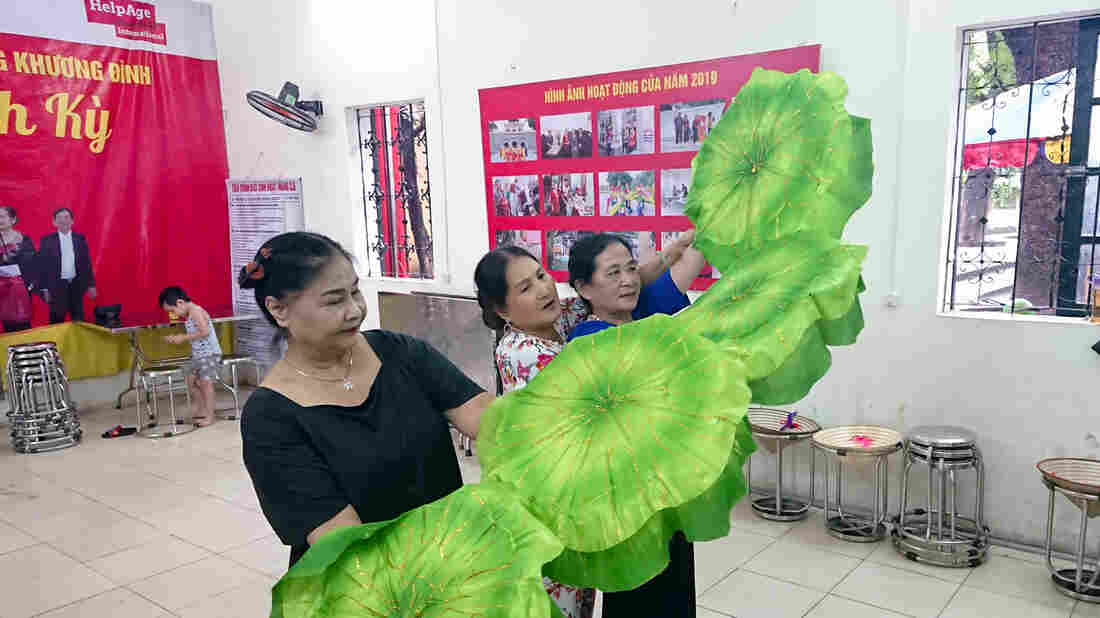 Members of the club practice a traditional Vietnamese dance to perform for the upcoming International Day of Older Persons on Oct. 1. Dao Thi Hoa hide caption

And even though the pandemic restrictions on gatherings have put some of these activities on hold, the club continues to offer a chance for older people like Dao to play an active role in helping people in her neighborhood.

Dao herself joined Khuong Din’s Self Help Club when it first started two years ago, at the age of 67. After retiring from a 35-year career as a civil service officer, she began volunteering, working at a disaster relief organization and the cancer ward of a hospital. The grandmother of two got interested in the club after hearing its mission — and decided to serve as a lead volunteer.

“Yes, I am an older person but I feel strong enough to help other people,” she says. “Because I can do that, I feel joy. It makes me feel young and energetic.”