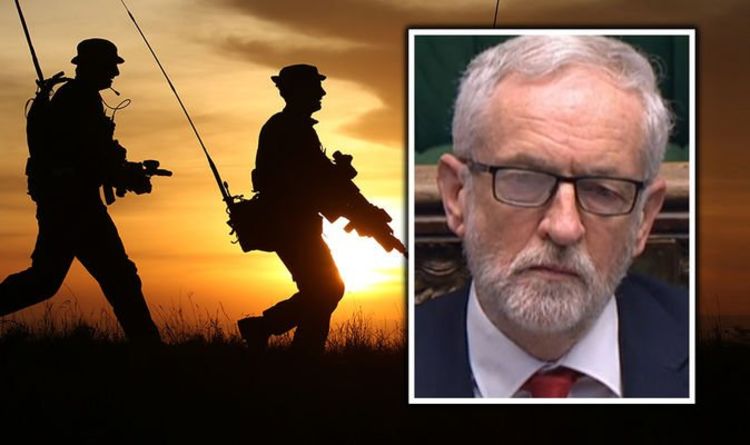 The former party leader along with 17 other Labour MPs all voted against the Government’s Overseas Operations Bill, despite being told to abstain. Three Labour frontbenchers joined Mr Corbyn in defying Sir Keir. The Bill would make exemptions from the European Convention on Human Rights in relation to Armed Forces personnel.

Labour MPs were instructed to abstain on the vote, neither giving their support for or against the Bill.

Speaking about the Overseas Operations Bill, he added the legislation “calls into question Britain’s proud commitment to the Geneva Convention” and “our moral authority”.

The Bill passed with 331 MPs voting in favour and 77 against in the Commons this evening.

Sir Keir Starmer has been forced to sack Parliamentary Private Secretary and MP for Nottingham East Nadia Whittome after she voted against the Bill.

Most of the 18 Labour MPs who voted against the Bill are backbenchers.

Before the vote, Mr Corbyn tweeted: “I have grave concerns that, as it stands, the #OverseasOperationBill the House of Commons is discussing today defies and undermines international law.”

He added the Government is bringing in a “legal presumption against prosecution for torture, war crimes, for crimes against humanity”.

He told the Commons: “This is the Government of Great Britain saying sexual crimes are so serious they’ll be excluded from this presumption, but placing crimes outlawed by the Geneva Convention on a less serious (level) and downgrading our unequivocal commitment for upholding international law that we in Britain ourselves after the Second World War helped to establish.”

However, arguing Lab our’s position, Mr Healey said: “The presumption against prosecutions for all crimes against sexual violence clearly creates the risk that the very gravest crimes including torture and other war crimes go unpunished.”

He added the Bill would risk a “triple lock” for troops and veterans.

This would include prosecution for alleged offences committed more than five years ago.

Mr Healey said: “The facts of this Bill are that it now places torture and other war crimes on a different level to crimes of sexual violence.

“That is not embarrassing. That is unconscionable. Ministers must think again.”

Former shadow immigration minister Bell Ribeiro-Addy, who also voted against the legislation, tabled an amendment to throw out the Bill.

She said: “There’s nothing remotely patriotic about rejecting international law and decriminalising torture.”

Labour MPs will seek to amend the bill as it goes to committee stage next.